On 18 and 19 June, the European Federation of Geologists (EFG) organised the online COVID19 Summit to discuss how the pandemic has affected its National Associations and geologists and geoscientists throughout Europe.

The 2-day Summit started with the welcome of President Marko Komac, who summarised the European Union’s response to the crisis. Then, Executive Director Glen Burridge updated members on the measures taken by EFG to address the pandemic. 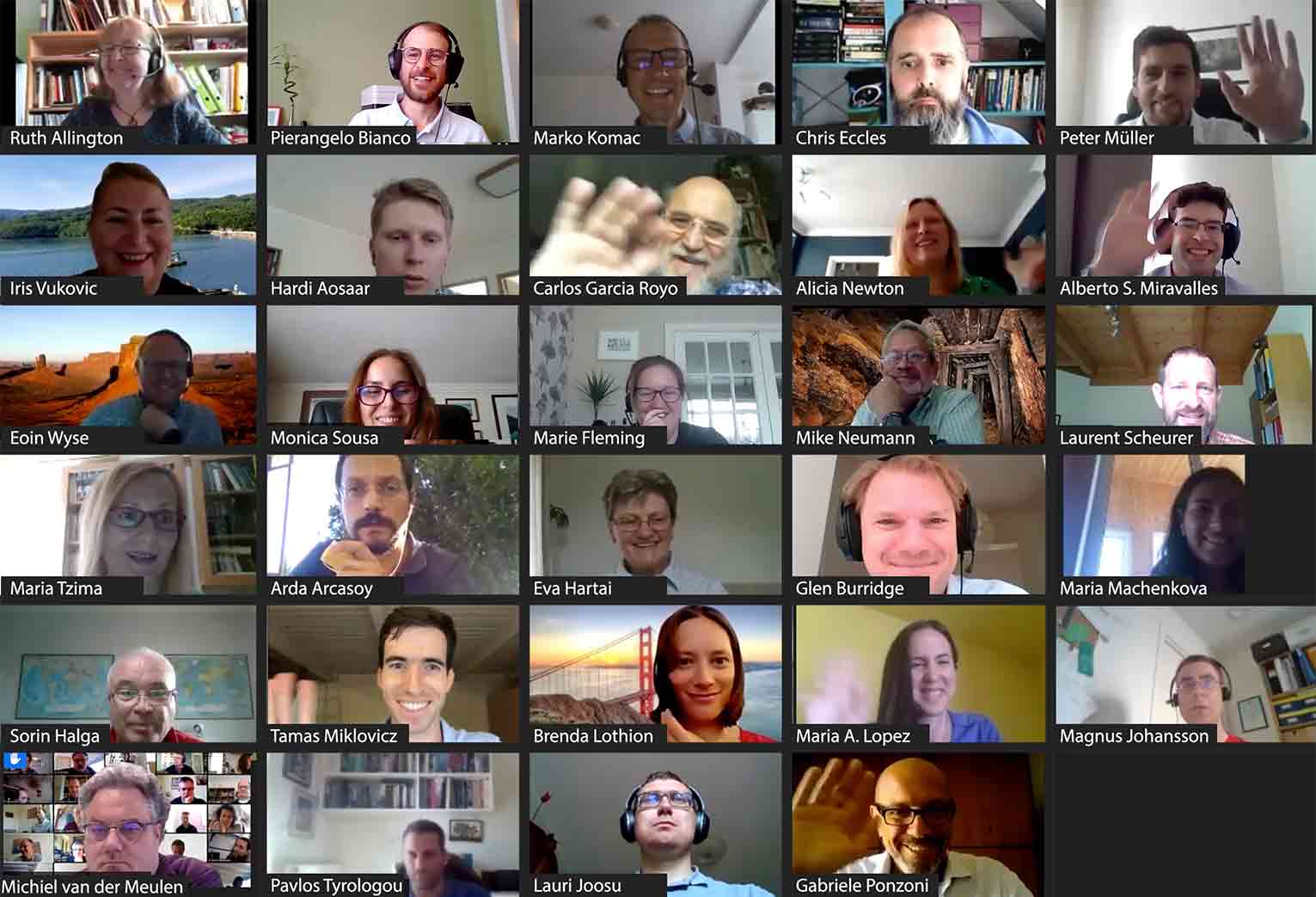 Following this, the result of the survey on the impact of the pandemic at EFG’s National Associations was presented. A total of 17 national and affiliated associations participated in the survey. The responses confirmed the interruption in the industry and academic activity within geoscience and showed concerns about job-creation and new opportunities in the future. Nevertheless, the associations participating expressed that the adaptation to the new situation had been fast and that remote working had been successfully implemented. Most of them considered that the situation won’t affect them in a dramatic way. After this session, the National Delegates presented the current situation on their countries and the short-, medium-, and long-term impacts expected for the associations.

Later, a group discussion focused on the challenges the pandemic has brought for the associations and the profession. The three main topics were: Functioning of the National Associations, Employment, and the Future of the Profession. Each topic was chaired by one member of the EFG Board who started and moderated the discussions. Treasurer Ruth Allington was the chair for the Employment discussion, Vice-President Michael Neumann was the chair for the Future of the Profession, and President Marko Komac moderated the discussion on the National Associations activities.

It was agreed that geology, as a profession, was severely affected by the pandemic. Some geoscientists lost their jobs, and others feared unemployment. Some sectors within geoscience have been more affected than others. The Oil & Gas sector, which was already in great difficulties before, it has been one of the most affected. Especially freelancers and small and medium-sized enterprises (SMEs) have been in a more critical situation.

The lockdown measures have imposed in most cases home office. Depending on the personality and personal situation of each individual, the consequences have been more or less favourable. Nevertheless, it was agreed that it has been more difficult than ever to separate private and work life. Furthermore, because of the exceptional situation, some professionals have had to combine work with taking care of family members. There were also concerns about how the situation is going to affect the quality and quantity of the new graduates in geoscience. In general, the uncertainty was a common concern when discussing the three topics.

During the second day, the discussion focused on finding common solutions, identifying opportunities and sharing best practises when facing the challenges ahead. Some tips were shared on how to improve remote working and the related isolation and how to make the most of it. Also, best practices were discussed for the functioning of National Associations. 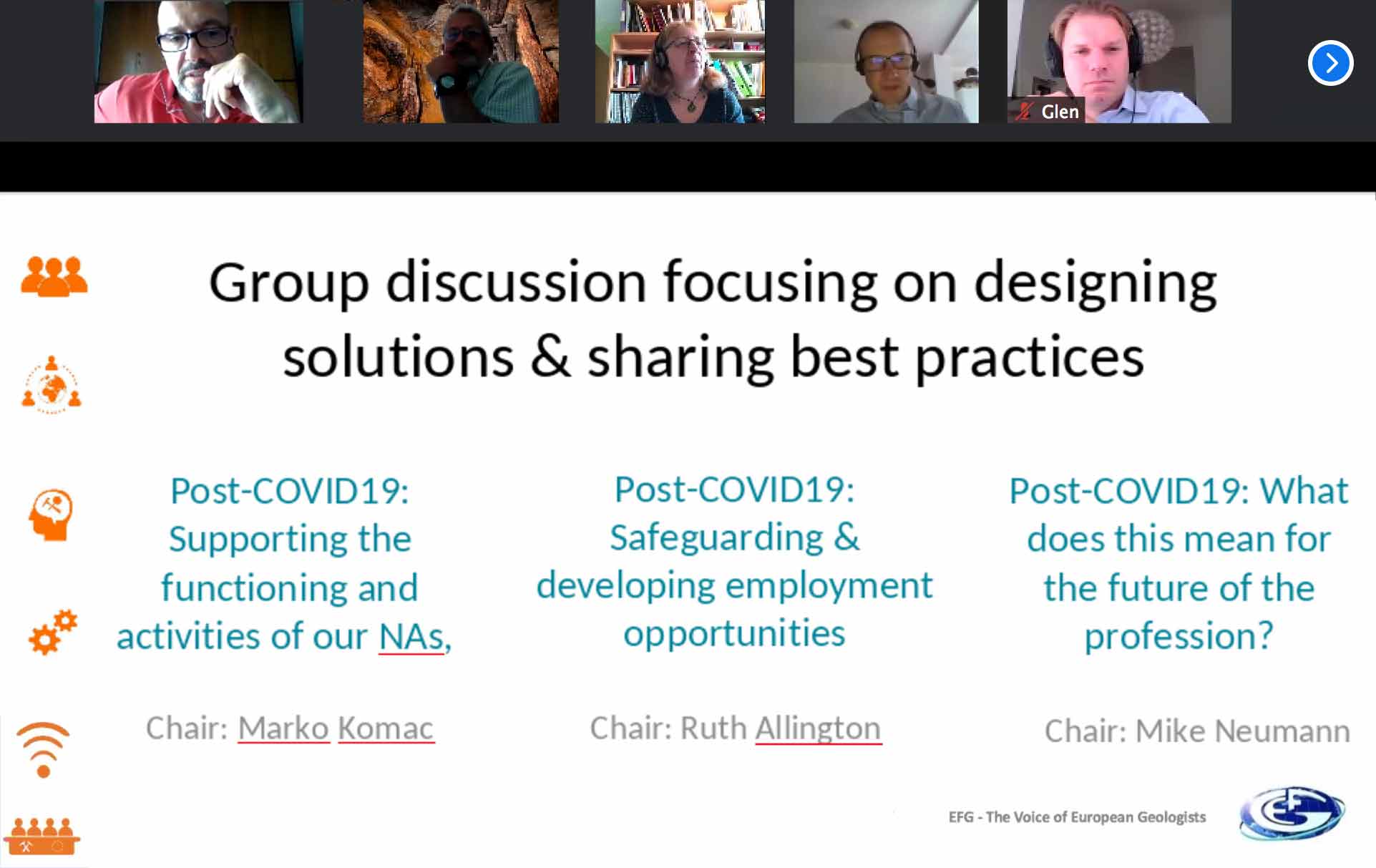 One of the opportunities highlighted was all the online resources for training and upscaling that had been made available. This period of confinement has been an opportunity for some to learn thanks to these free and paid courses. In relation to this, it was mentioned the importance of learning also from other disciplines: project management, business, trade. In addition, the pandemic has made clear the importance of being a digital native.

Interesting reflections about the Future of the Profession were shared during the second day. It was highlighted that there is work to do for achieving a greater diversity, inclusion and gender balance in the profession. Also, it was discussed that geoscientists are essential in bringing about a sustainable future. Society needs geoscientists for fighting issues like climate change, even if people are not always aware of it. This is why, it was concluded, it is necessary to raise the profile of the geological profession and re-brand geoscience to showcase its important role towards a sustainable future.