This year, the Researcher’s Night “Wisenight” that was jointly organised by seven partners* and took place in Brussels on 24th and 25th September 2021, shone the light on women in science in general and more particularly on 30 remarkable female Marie-Skłodowska-Curie fellows whose portrait and research profile were shown to the public in the Royal Institute of Natural sciences Museum (RBINS) in Brussels. On Saturday, several activities took place in the Brussels Planetarium and the Natural Sciences Museum. It was an ideal occasion to experience the newly built Augmented Reality Sandbox at RBINS and show our visitors, young and old, how fun it is to play within the Geosciences.

The sandbox Augmented Reality (AR) experience allows users to create topography models by shaping real sand, which is then augmented in real time by an elevation colour map, topographic contour lines, and simulated water. It combines 3D visualization applications with a hands-on sandbox aimed to teach earth science concepts. The system teaches geography, geology, and hydrology themes. It is a handy tool to learn about topography maps, the meaning of contour lines, catchment areas and floods etc. Through visualization, it creates awareness of large-scale processes less visible on the human-scale (spatial and temporal) perception and is therefore a powerful tool in children’s education of anthropogenic processes leading to threats for the environment (Woods et al., 2016).

The system teaches geography, geology, and hydrology themes. It is a handy tool to learn about topography maps, the meaning of contour lines, catchment areas and floods etc.

AR Sandbox is the result of a National Science Foundation (NSF) (USA)-funded project on informal science education for freshwater lake and watershed science developed by the UC Davis’ W.M. Keck Center for Active Visualization in the Earth Sciences (KeckCAVES), together with the UC Davis Tahoe Environmental Research Center, Lawrence Hall of Science, and ECHO Lake Aquarium and Science Center. The geological and structural geology software for the AR Sandbox was developed by the computational Geoscience and Reservoir Engineering group @RWTH Aachen.

Resources for the construction of the AR sandbox as well as the open-source software are available at the website of the UC Davis’ W.M. Keck Center.

Three big ’push’ buttons were installed for ‘flooding’ (making heavy rain where the sandbox is virtually flooded); ‘drying’ (drying up of the waterbodies present) and ‘Freezing’ (stopping the topographic interaction with the sandbox). These buttons make it possible to hold a flat white board under the beamer to show the children what 2D topographic map is created from the real 3D-landscape they made in the sand.

Additionally, two Electro-GeoQuiz were built where visitors had to link pictures of outstanding geoheritage sites with the location on a world map in the first quiz and link specific steps in the evolution of life with the right moment in a chronostratigraphic column in the second quiz.  The button lit up for each correct answer.  It is a fun educational way to introduce the concepts of ‘Evolution of the earth’, ‘geological time’, ‘Geoheritage’ and ‘Geodiversity’

During Wisenight, children of the age between 8 and 12 years old, were invited to play for ~20 minutes with the AR sandbox and the concepts of elevation, topography map, 3D- versus 2D- visualization, rivers/lakes and flooding/dryness were introduced.

In order to reduce the risk of Covid-19 infections, masks and nitrile unpowdered gloves were provided for the Sandbox animation as social-distancing could not be ensured by the children. Overall, the Covid regulations were well accepted and followed.

Originally registration was for ~80 children but at the end of the day, approximately 130 children as well as some parents enthusiastically tested the AR sandbox. 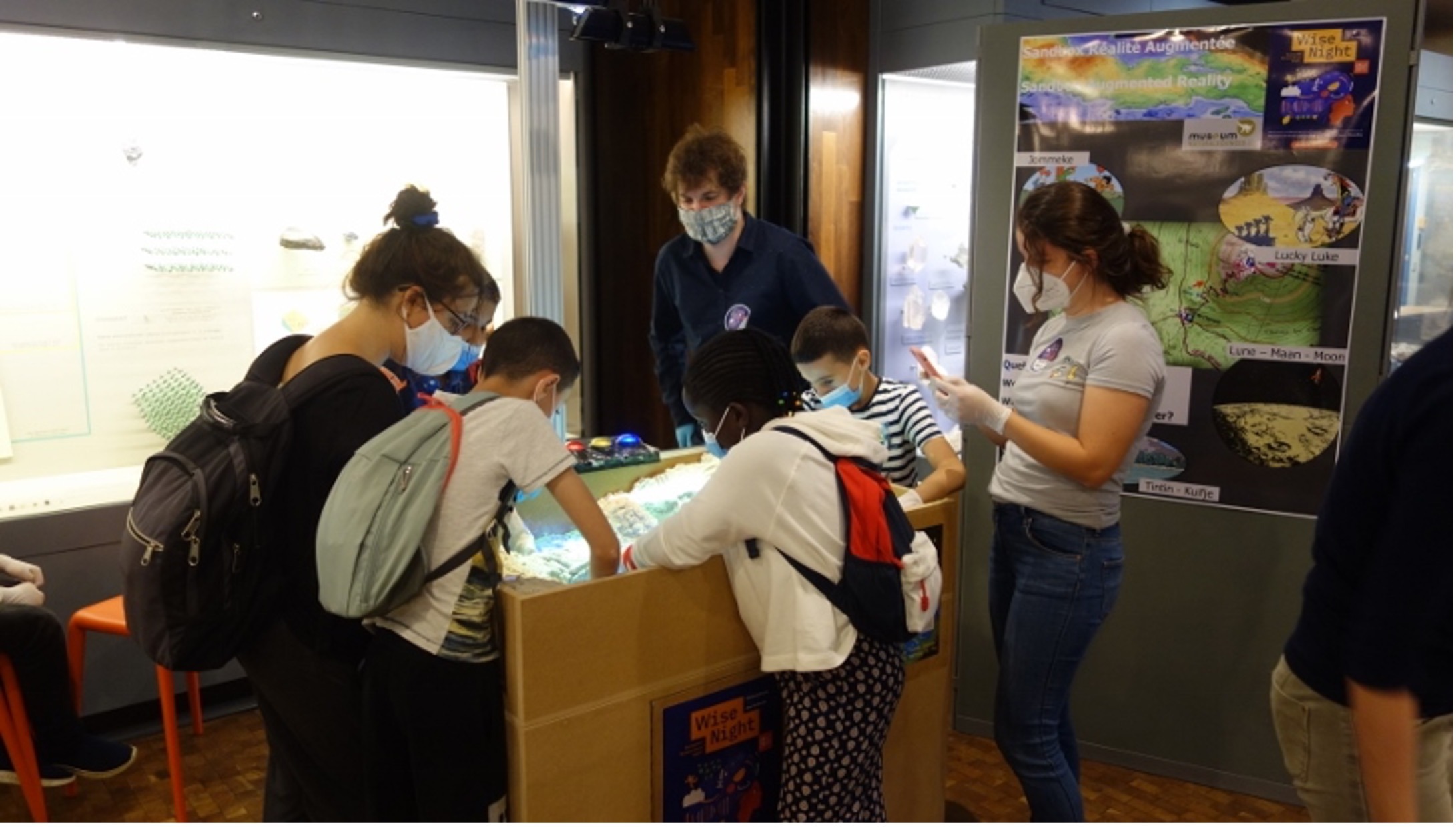 Figure 1: The AR Sandbox in the mineralogy room at RBINS.

The Electro-GeoQuiz turned out to be the perfect family animation, creating lively interactions between the children and their parents. 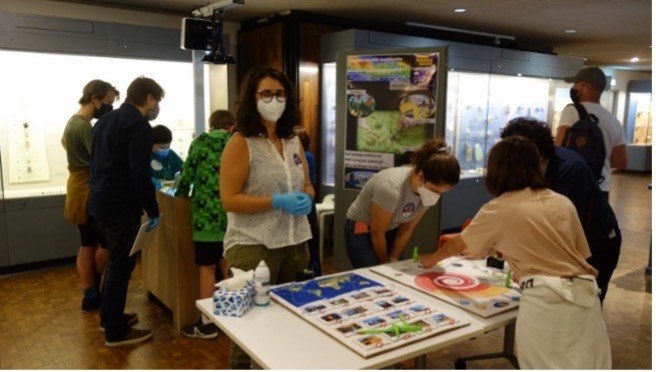 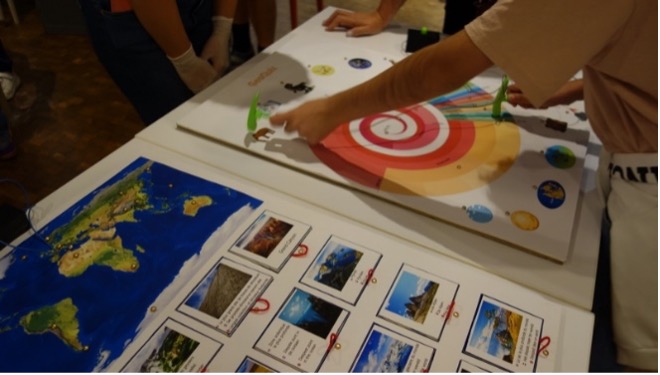 Figure 2: The Electro-Geoquiz was introduced in front of the Sandbox. 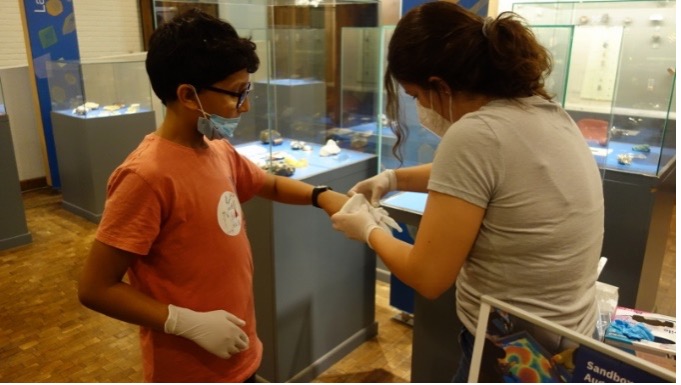 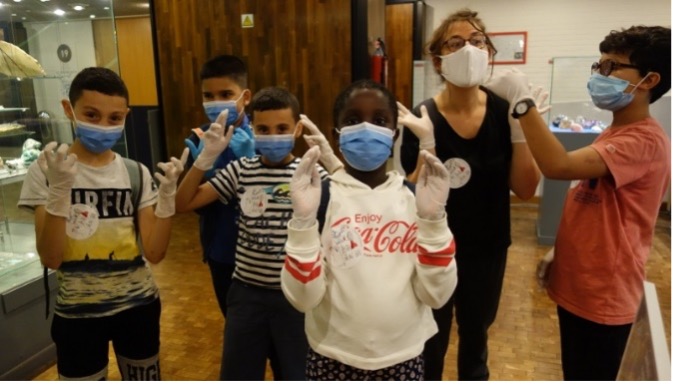 The sandbox was designed to have up to 8 children around it. However, this first testing showed that 5-6 children was optimal. With clear instructions that no sand was to leave the box and to clap our hands 3 times before taking our hands out of the box, only a small quantity of sand left the box (~3kg over the whole day). Sand was regularly removed with a dustpan and brush.

Several children started off in a relatively shy way, but quickly became very animated when constructing the small sand mounds allowing creativity to be fostered, especially when encouraged by the children who had already been at the sandbox for several minutes. Other children rapidly adopted the concept and built amazingly complex landscapes, integrating flowing water, floods, landslides and droughts. After a while, the children themselves asked to ice the animation so that they could see the topographic map of their landscapes.

Several visitors asked if the animation would stay in the Museum as a permanent exhibition, indicating a great interest for re-experiencing. Three visitors asked if similar school events could be arranged, confirming the interest of the schoolteachers to return with their pupils.

The next step is to implement the software for geophysics, structural geology and stratigraphy (Klump et al., 2020). Some announcements and live videos can be seen at the links below as well as a movie on Wisenight.

In summary, it was a fantastic experience and showed the high educative value of this newly developed innovative tool for promoting the Geosciences within society. It is a must-have for every museum! 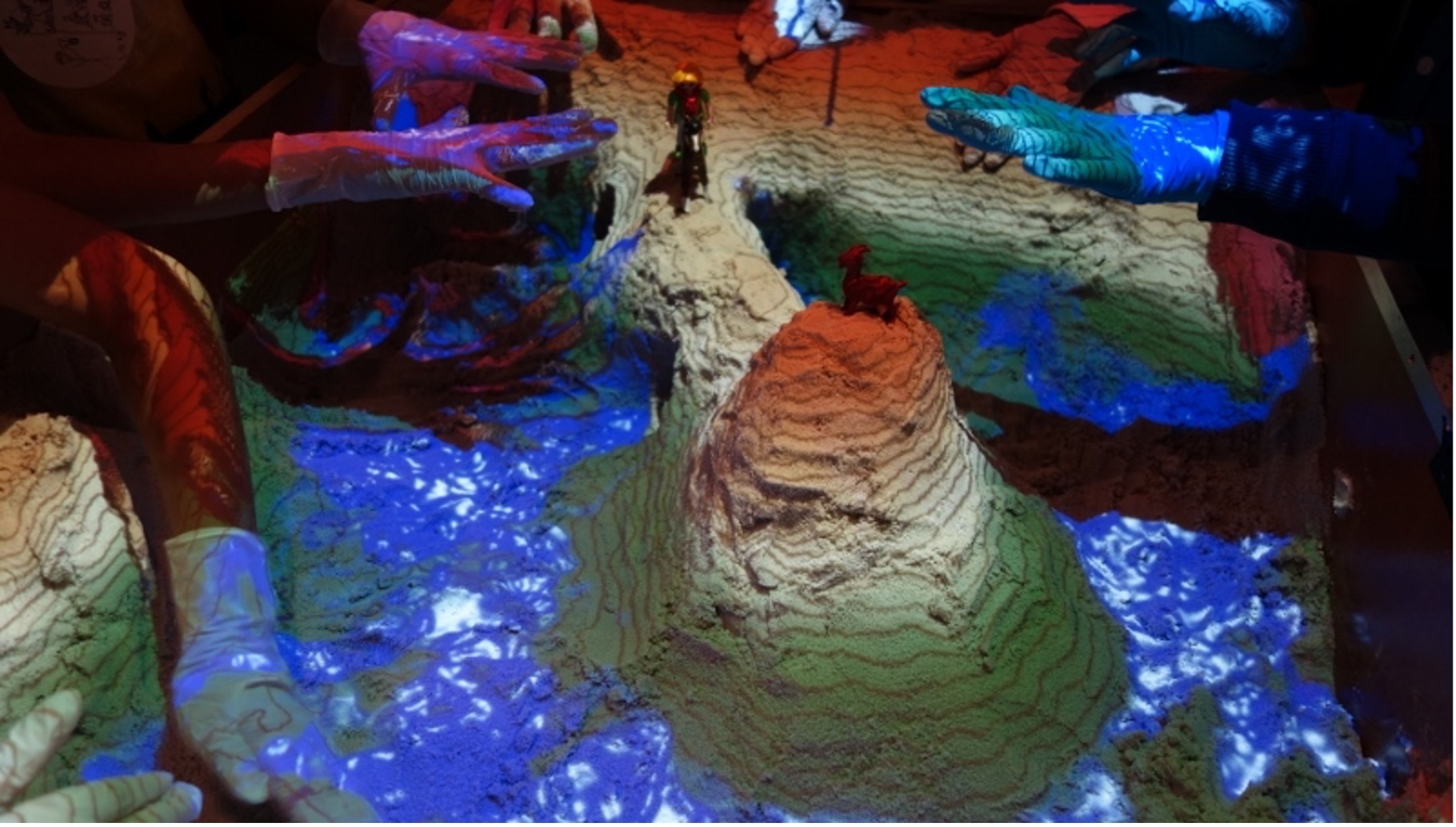 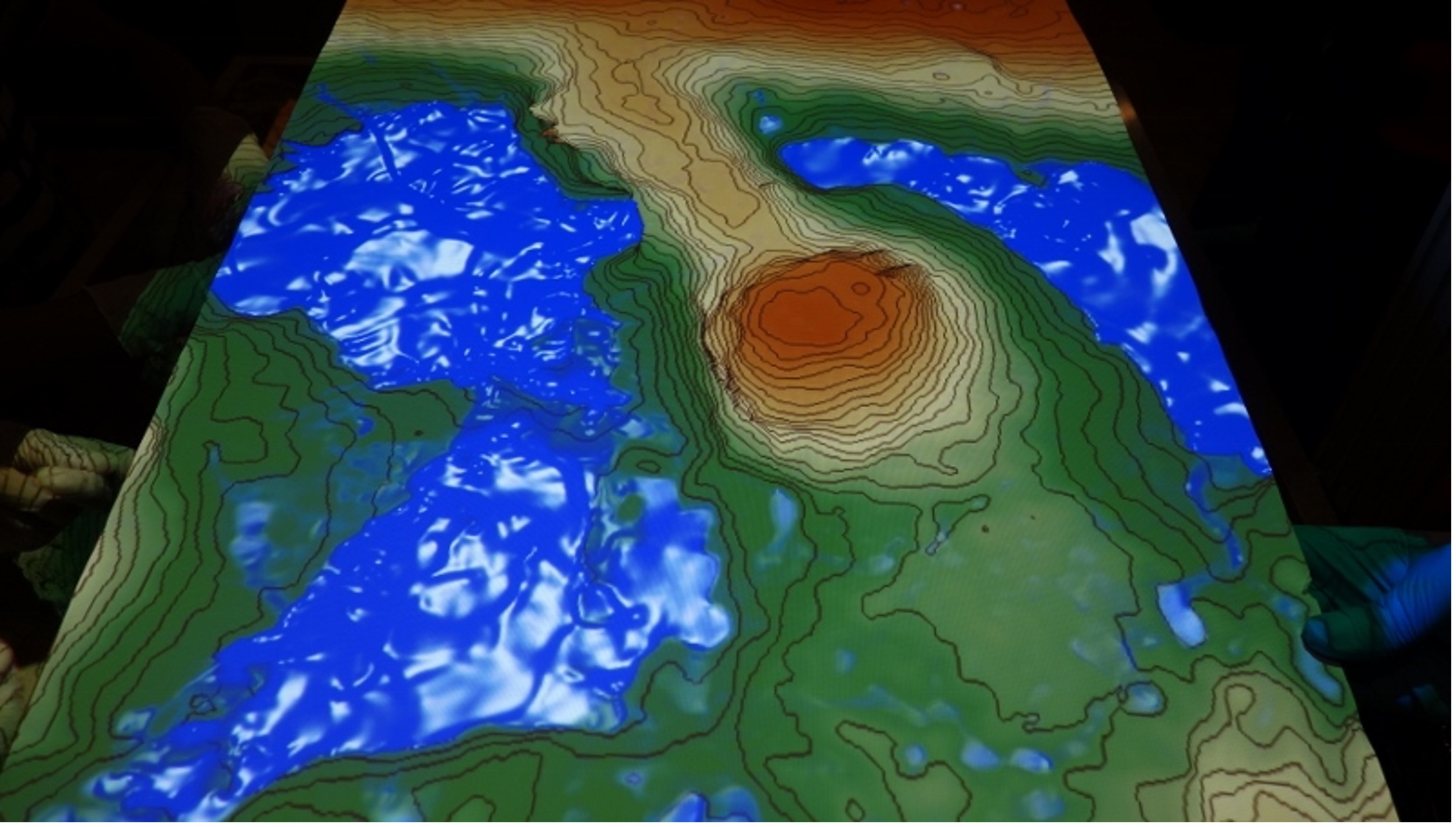 Figure 4: The real 3D landscape made in the sand by the children (left) and the 2D topographic map (right) created by holding a white board under the beamer after pushing the ‘icing’ button.

The Augmented Reality Sandbox experience (including photographs) was publicised on Saturday morning:

The GeoQuiz (including photographs) was publicised on Saturday morning:

A short film about the AR Sandbox in English:

A film of the Wisenight event:

The authors of this blog post are 6 geologists form the RBINS – Geological Survey of Belgium with different expertise ranging from engineering, through rock geochemistry to geodiversity and conservation or palaeoclimate.

Disclaimer: This article expresses the personal opinions of the authors. These opinions may not reflect the official position of the European Federation of Geologists (EFG).