Happy birthday to EFG and the European Geologist journal

Surprise! To celebrate the anniversary of the European Geologist journal and the 40th birthday of EFG we are republishing the early issues of our journal in digital format.

To start with, have a look at issue 1 which was published in 1995. As President Gunnar Hultquist stated in his introduction, the journal “is one of the EFG efforts in marketing the Federation. The Magazine also pretends to introduce the conception of the European Geologist Title to the public.” The journal – which was called a “magazine” at this time – features articles from the fields of engineering geology and mineral resources. 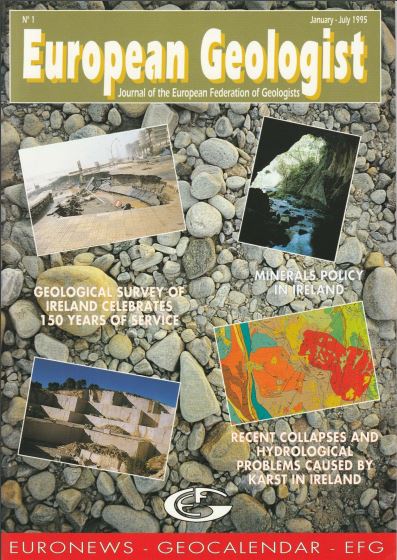 The cover of European Geologist n°1.

Timely to celebrate the 40th birthday of EFG this year, it also includes a paper on the Federation’s history. As you can read on page 37, “The E.F.G. was officially born in Paris in July 1980 during the 26th. International Congress of Geology; and was composed of the Professional Associations of Spain (A.G.E., l.C.O.G.), Italy (A.N.G.I., O.N.G.). Portugal (A.P.G.), United Kingdom (!.G., now G.S.), France (U.F.G.), Belgium and Luxembourg (U.B.L.G.). In July of the same year the Statutes were presented to the European Economic Community in Brussels.”

Since then, many more national associations have joined EFG and we are proud to represent today more than 45.000 geoscientists from 27 European countries.

To celebrate this double anniversary, we invite you to discover issue 1 of European Geologist here: https://bit.ly/3gGQeQu