The H2020 project “CHPM2030 – Combined Heat, Power and Metal extraction from ultra-deep ore bodies” aims to develop a novel technology which combines geothermal resource development, metals extraction and electro-metallurgy in a single interlinked process. In order to improve the economics of geothermal energy production, the project will investigate possible technologies of manipulating metal-bearing geological formations with geothermal potential at a depth of 3-4 km and even deeper. In this way, the co-production of energy and metals will be possible and may be optimised according to market demands in the future. The project will provide a proof of the technological concept on a laboratory scale. It will be implemented through the cooperation of 12 partners from 10 European countries.

In the coming decades, the European energy market will face major challenges to become less dependent on imported fossil fuels and to reduce the environmental impact of its energy supply. A major option, geothermal energy is already being used worldwide, including in many parts of Europe, because it is clean, renewable and constant. The European Commission actively promotes research and development on Enhanced Geothermal Systems (EGS). The main problems related to these systems are improving the efficacy of the underground heat exchanger, increasing the economic lifetime of EGS plants and lowering capital and operative costs.

Europe has another major challenge: securing the supply of critical raw materials, in particular metals, for industry and society. The dependency on metal is growing every year, despite significant efforts in the development of recycling and substitution. 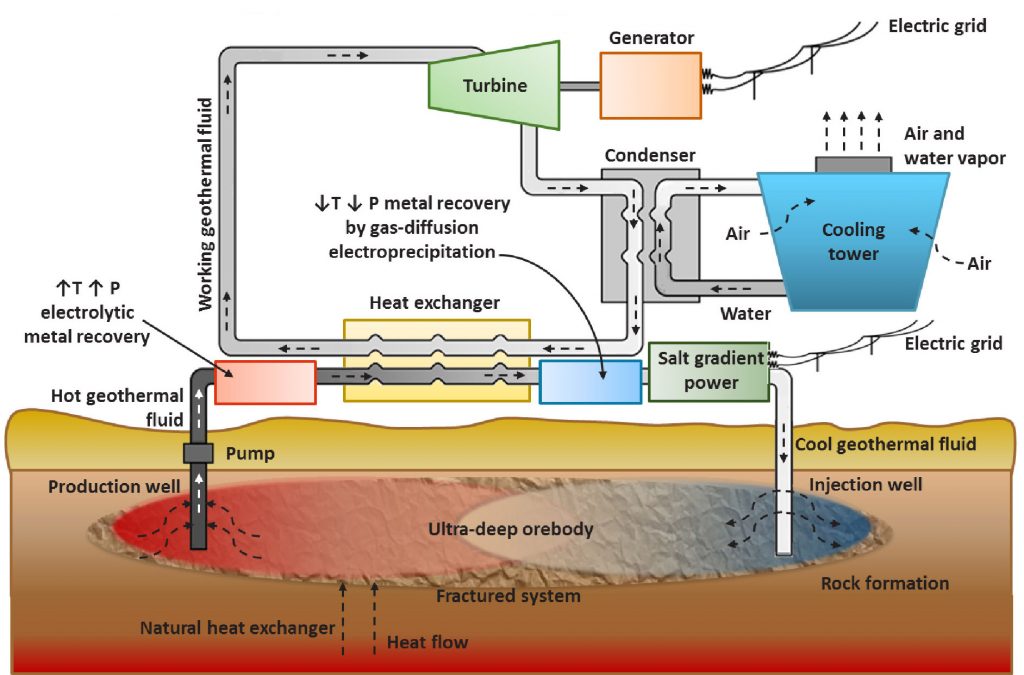 The CHPM2030 project (Combined Heat, Power and Metal extraction from ultra-deep ore bodies with an aim of implementation by 2030) aims to develop a novel technological solution that can help satisfy the European needs for energy and strategic metals in a single interlinked process. In the CHPM technology vision the metal-bearing geological formation (deep orebody) will be manipulated so that the co-production of energy and metals will be possible (Figure 1). The project started in January 2016 and lasts for 42 months, but aims to initiate a new type of geothermal exploitation that will endure for much longer, and to have an operational plant by 2030.

Although metals are available in the Earth’s crust, current exploration and mining technologies limit accessibility. Metal concentrations (ore deposits) can form at any depths, from the Earth’ surface to the deepest zones of the lithosphere. However, there are physical barriers hampering our access to mineral deposits at several kilometers’ depth. The deepest operating mine in Europe (Pyhäsalmi in Finland) goes down to about 1400 metres (Weihed, 2013). Everything that lies below 3000 metres is considered “ultra-deep” for conventional mining and out of scope for minerals prospecting in Europe. Whilst we have detailed knowledge of the surface geology in many regions, the amount and quality of information dramatically reduces with depth. However, from recent 3D and 4D geological modelling we know that metallic mineralisation in most mineral belts in Europe exists also at depths beyond those previously targeted by commercial exploration.

As for the energy aspects, with the current state of technology, the worldwide technical potential for geothermal electricity generation is six times higher than the currently installed capacity (Fridleifsson et al., 2008). It is clear that the development of geothermal power production is not in line with its theoretical and technical potential. Although it could be a base load energy source, financing geothermal projects has been difficult, and the development of Enhanced Geothermal Systems (EGS) in Europe has fallen short of initial expectations. This is due to the combination of high risk and high capital costs required for investment. Metal extraction from the geothermal fluid can provide added value to the system, which has the potential to increase the financial feasibility of geothermal development.

The presence of metals in geothermal fluids is well unknown. Some geothermal systems are sites of precious metal transport and deposition. For example, wells drilled to 3 km depth in geothermal systems of the North Island, New Zealand were sampled and it was found that deep reservoir waters have Au concentrations that range from 0.1 to 20 ppb and Ag concentrations that range from 2 to 2000 ppb (Simmons et al., 2015, 2016).

Extraction of minerals from geothermal brines is also an applied technology in a few geothermal fields (Table 1).

The CHPM2030 project is composed of eight work packages. The linkage between the work packages and the work organisation are shown in Figure 2. 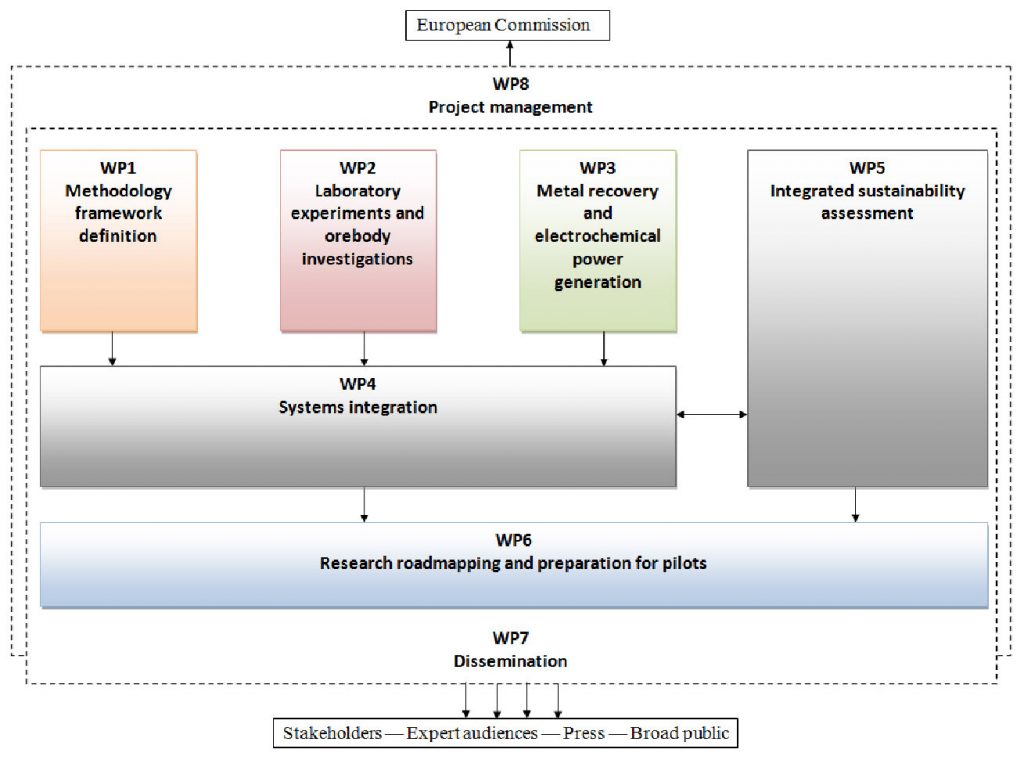 The project work started with the formulation of the conceptual framework. The objective of this work phase was to synthesise our knowledge on ultra-deep (> 4 km) metallic mineralisations that could be converted into an “ore body EGS”. Four reports were prepared within this work package (http://www.chpm2030.eu/outreach).

The first report provides a review of metallogenic provinces in Europe. The ore-forming processes, the structure and the metal content of the ore deposits are discussed. Special focus is put on the mineral potential at depth and in temperature zones that are currently the target of EGS (Hartai et al., 2016).

The second report is an overview of four major ore districts in Europe, namely in SW England, southern Portugal, NW Romania and central and northern Sweden (these are the potential test sites by 2030). It is completed with a survey of existing boreholes in the European countries where temperatures at depth in access of 100 °C are observed. The report includes descriptions of the geological settings and on-going geophysical efforts to probe more deeply, and with increasing resolution, in order to detect mineralised zones at depth, as well as attempting to estimate their geothermal potential (Schwarz et al., 2016).

The third report summarises the results of laboratory investigations on ore samples that represent the study sites of the CHPM2030 project, completed with samples from other ore types. The results are evaluated with a relevancy to the CHPM technology (Németh et al., 2016).

The fourth report provides a methodological framework to be used as a guide for the laboratory measurements in work package 2, and also for data collection for modelling heat transport. The currently existing reservoir enhancement technologies are also reviewed (Szanyi et al., 2016).

In the second year of the project, the focus will be on laboratory measurements in order to test the following hypotheses:

(1) The composition and structure of orebodies have certain advantages that could be used when developing an enhanced geothermal system;

(2) Metals can be leached from the orebodies in high-enough concentrations over a prolonged period of time;

(3) The continuous leaching of metals will increase the system’s performance over time in a controlled way and without using high-pressure reservoir stimulation, minimising potential detrimental impacts of both heat and metal extraction.

Laboratory examinations will be carried out to determine heat conductivity, fracture enhancement possibilities and stress field determination. Metal content mobilisation will be tested by relatively mild leaching methods (i.e. not using very strong acids), and also with the use of functionalised carbon nanoparticles. The specific aim of this task is to obtain shaped carbon particles with unique structural and chemical properties for the selective and reversible adsorption/complexation of the targeted metals.

Based on the outcomes of the above-mentioned work phases, work package 4 will integrate downstream and upstream processes into a single system and develop optimisation strategies for energy and metals production. This task will combine the Consortium’s past experience with the design of medium and high-enthalpy geothermal systems and the outcomes of WP2 and WP3 to create a novel technology line that will produce energy and saleable metals in a single process. This knowledge will be utilised to adapt the design of a contemporary power plant to the expected temperature and extreme salinity conditions that will occur under the CHPM2030 scheme.

In parallel with the laboratory research, environmental and socio-economical assessments will be carried out, paying due attention to ethical considerations. The expected social, economic and environmental impacts for each component of the proposed CHPM technology will be considered. This work will be followed by an overall systems-level performance assessment. It will include a preliminary life cycle assessment and investigations concerning the environmental footprint of the envisioned technology scenarios. Comparison will then be made with existing systems (both for power generation and mineral extraction) to gain a thorough understanding of the relation of CHPM2030 to existing solutions from environmental and economic performance point of view. Performance indicators will consider the fact that CHPM envisions the integration of two –  so far independent – processes for improved economics: the production of energy and the production of metals.

CHPM2030 is a research project at a low technology readiness level (TRL), based on a novel idea that needs further nurturing and support beyond the immediate duration of the project. However, work package 6 will move towards these goals by generating new knowledge about specific areas of geothermal and mineral deposit potential, and will set the scene for subsequent pilot implementation. Converging technology areas will be assessed and a research roadmap will be developed that will help bring forward the realisation of the envisioned CHPM scheme. Two roadmaps will be provided: roadmap 2030 will provide a timeline and direct support towards the implementation of the first CHPM pilots at the four potential test sites: SW England, southern Portugal, NW Romania and three mining regions in central and northern Sweden. Roadmap 2050 aims at supporting breakthrough research for further development of the CHPM technology.

The dissemination work package seeks dialogue and engagement as well as dissemination of thematic work package outputs towards the stakeholder communities, research organisations, companies, investors, funding organisations, relevant technology platforms, and the general public. The management will ensure smooth and on-time execution of the project, based on the description of work and in accordance with the European Union’s regulations.

This project has received funding from the European Union’s Horizon 2020 research and innovation programme under grant agreement No. 654100.

Read here
We use cookies on our website to give you the most relevant experience by remembering your preferences and repeat visits. By clicking “Accept All”, you consent to the use of ALL the cookies. However, you may visit "Cookie Settings" to provide a controlled consent.
Cookie SettingsAccept All
Manage consent