EFG Webinar: Vegetation as a remedial measure against erosion and shallow landslides in steep soil slopes 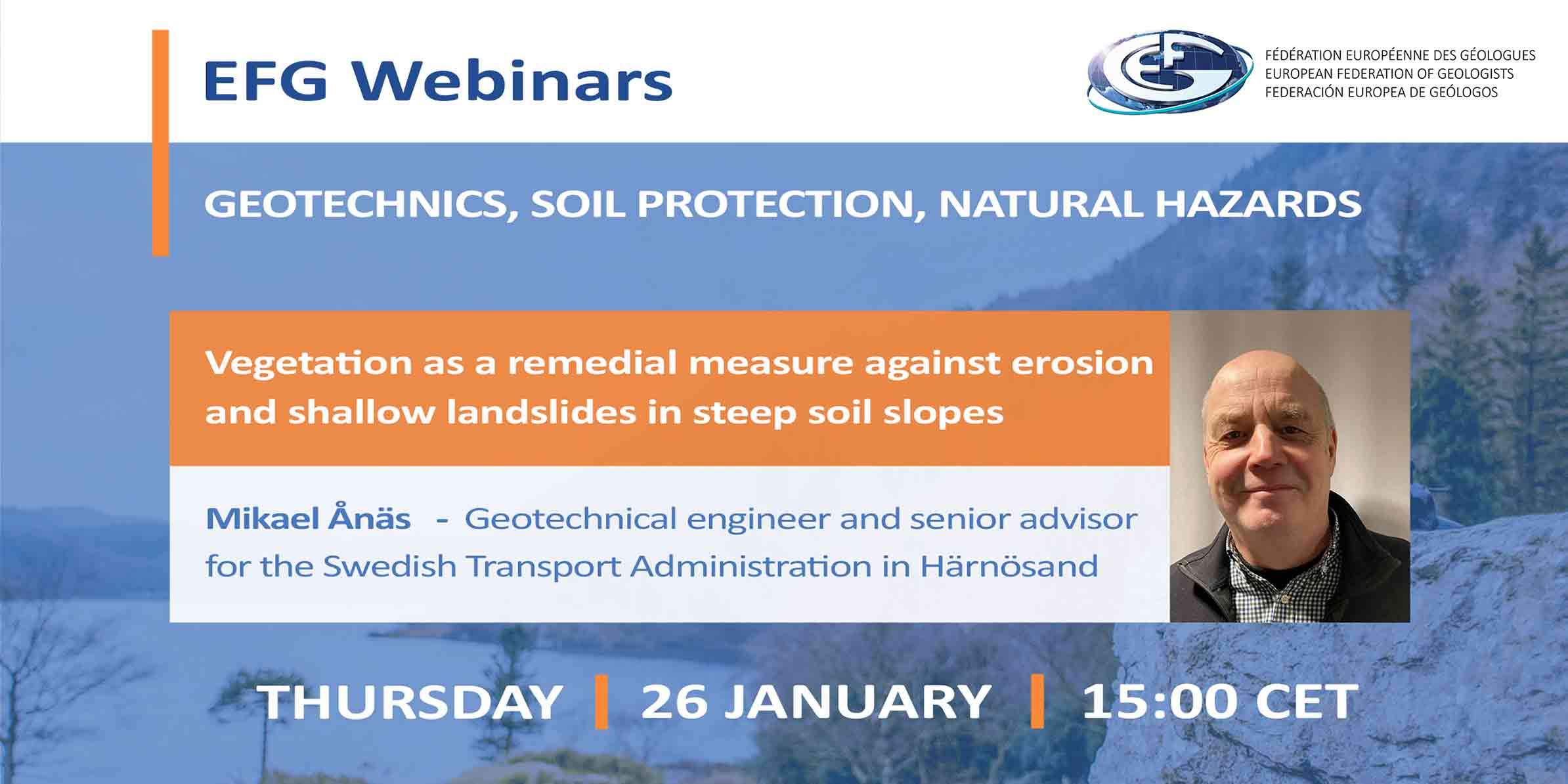 On 26 January 2023, the European Federation of Geologists (EFG) is organising the webinar ‘Vegetation as a remedial measure against erosion and shallow landslides in steep soil slopes‘. The event is scheduled for 15:00 – 16:00 CET (Brussels time).

The presenter of the webinar will be Mikael Ånäs, geotechnical engineer and senior advisor for the Swedish Transport Administration in Härnösand. The host of the session will be Pavlos Tyrologou, EFG External Relations Officer, Coordinator of the EFG Panel of Experts on Natural Hazards and Climate Change and Editor-in-Chief of the European Geologist Journal.

The Swedish Civil Contingencies Agency, the Swedish Geotechnical Institute, the Swedish Road Administration and the Swedish University of Agriculture have together been involved in a project named ‘Vegetation as a mean for slope stabilisation’. The aim of the project was to introduce soil-bioengineering methods in Sweden through demonstration projects and to obtain experiences regarding the function and effect of plants on slope stability within the Swedish conditions. In three selected areas, the plant and soil conditions were studied, with tests commencing in the spring of 2004 and at the beginning of 2005. The project ended in 2007 with a report containing recommendations for the continued use of soil bioengineering methods.

1) In the test site Bispgården, a new road was built in 2004 through a gully area. The soil consists of highly erodible silt and sand material. Hedge and brush layers with grass seeding were selected to protect the soil from erosion on one slope. Equipment for measurements of pore pressure and precipitation was installed in the summer of 2004. Studies of the plants’ conditions were conducted several times during the first two years of the project.

2) In the test site Bydalen, a reconstruction of a country road was conducted in 2005, as the road was plagued with annually recurring erosion along its existing silty-till slopes. These slopes were to be restabilised during reconstruction. Altogether, nine existing slopes were stabilised in early 2005 by different soil bioengineering methods proposed by the project group. The group analysed the function of the plants together with automated recordings of precipitation.

3) In the test site Näsåker, steep slopes of a country road were repaired between 2005 and 2008, due to continuing erosion and landslides in the silty soil slopes along the existing road. The slopes were stabilised with soil bioengineering and soil nailing.

Different soil bioengineering methods have been used in new production sites, following this demonstration project. The methods may also be implemented in future projects. The results from the demonstrations in the three sites will be described in the EFG webinar.

Register for the free webinar at the following link: https://bit.ly/3HkB42o

Mikael Ånäs works as a geotechnical engineer and senior advisor for the Swedish Transport Administration in Härnösand, in central Sweden. He is involved in all stages of roads, railways and bridges construction, from planning to completion of the infrasctructure. He also provides advice to the Maintenance Department of the Swedish Transport Administration concerning landslides, erosion and floods. Previously, he worked as a consultant in Sweden and Finland. Before that, he was a researcher for the Renlund’s Foundation at the Åbo Akademi University in Turku, Finland.

The organiser of this event (European Federation of Geologists) is collecting the data you have provided for the registration to the webinar on 26 January 2023. Your personal data are processed in accordance with the General Data Protection Regulation (EU) 2016/679. The following personal data are collected: email address, first name, last name, job title, the name of your company or organisation (these last two questions are optional). The recipients of your data will be the staff of the European Federation of Geologists (EFG) in charge of the event organisation. Your data will not be shared with third parties and will not be used for other purposes than providing access to the event. Your data will be kept for a maximum period of three months after the end of the event. Data will be automatically deleted at the end of this period. You have the right to access your personal data and the right to correct any inaccurate or incomplete personal data. If you have any queries concerning the processing of your personal data, you may address them to maria.a.lopez_at_eurogeologists.eu.