Use of depleted hydrocarbon reservoirs for geothermal energy and its significance in energy transfer toward a low-carbon economy: a paper factory project in Slatina, Croatia

The city of Slatina is placed in the Croatian part of the Pannonian Basin, an oil and gas bearing region with a long tradition of exploitation and exploitation. Due to depletion of hydrocarbon reserves, since the 1980s the possibilities of using geothermal energy from the existing wells have been considered. This paper presents the project of a new paper factory in Slatina. In the first phase, it will use geothermal water directly in the paper factory for heating and in manufacturing processes. A geothermal power plant will be constructed in the second phase. In case of success, this project can serve as a good example of energy transfer toward a low-carbon economy.

The city of Slatina is situated in north-eastern Croatia (Figure 1) in the Croatian part of Pannonian Basin, within an oil and gas (O&G) bearing region with a long tradition of fossil fuel exploitation which resulted from a high degree of exploration. After the peak in 1981, the oil production in Croatia slowly declined. Although depletion of hydrocarbon reserves was still decades away, in the 1980s, the possibilities of using geothermal energy from the existing wells were already being considered. Oil and gas fields and geothermic aquifers are placed in Neogene sandstone and breccia reservoirs screened by marl at depth intervals between 1 to 5 km. Successful conversion of O&G exploration wells in geothermal fields has taken place and significant reserves of geothermal energy have been discovered in the Lunjkovec and Ferdinandovac aquifers or in the surroundings of the Molve and Kalinovac O&G fields (Figure 2). Considering these developments, it was decided to use geothermal energy from the old oil wells in the new paper factory to be built in Slatina (Figure 3).

In the first phase of the project geothermal water will be used as the heating source for water used in manufacturing processes and for the heating of halls and offices. In further phases we plan to install a geothermal power plant in order to supply the factory with electricity and possibly the Slatina City electric grid, as well.

In the area of Slatina, geothermal potential was determined based on investigations carried out in the second half of the last century. The National Croatian Oil Company INA conducted exploratory drilling for the purpose of determining oil and gas reserves from the 1960s through the 1980s. Significant reserves of geothermal water with a temperature range of 130–191°C at depths of 3,000–5,000 metres were found in more than a dozen exploration wells.

In the first phase, geothermal water will be used directly in the paper factory for heating halls and offices and in manufacturing facilities. The first phase requires a flow rate of 73 litres per second with a temperature between 150 and 200 °C (ECOINA, 2013). Capacities of similar reservoirs are between 100 to 347 litres per second (Dukić, 2012). In the second phase, the planned geothermal power plant will use geothermal water at a temperature of 190 °C and a pressure of about 80 bar. The power of the power plant is 10 MW. The second phase requires a capacity of 83 litres per second (ECOINA, 2013).

Urban planning documentation for the city of Slatina in Virovitičko–Podravska County takes into account the use of geothermal energy in the future and the synergy potential of the new paper factory (Figure 1), with the plant being recognised as the starting point in this process. The required Environmental Impact Assessment (ECOINA, 2013) was approved by a government commission and passed public review with discussion, and finally was accepted by the Ministry of Environment and Energy, Republic of Croatia (MEP 2014). 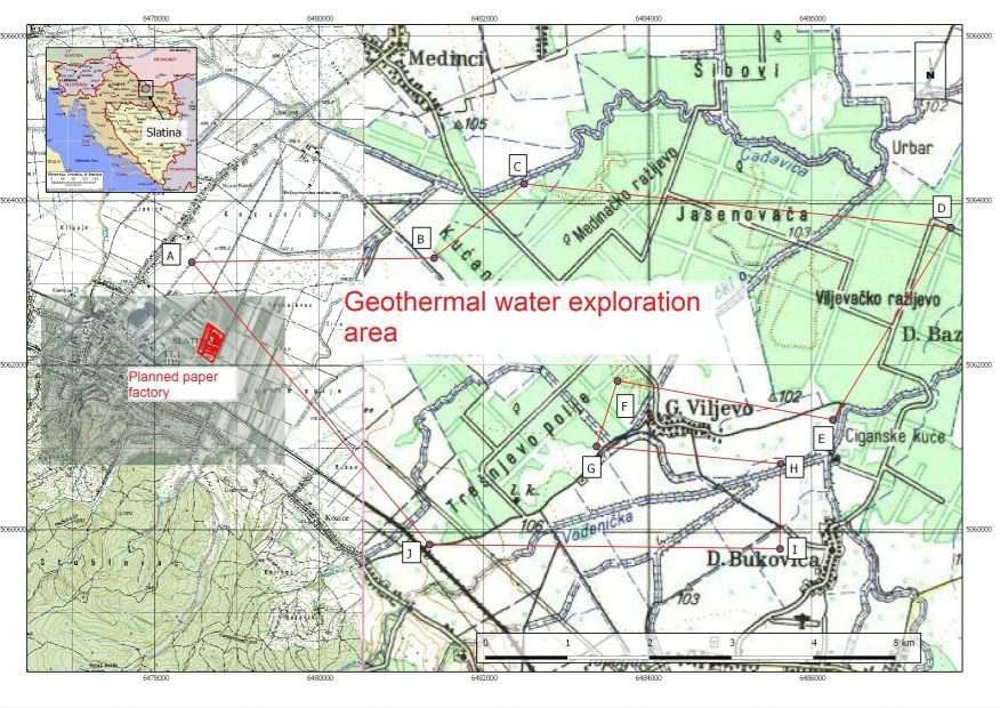 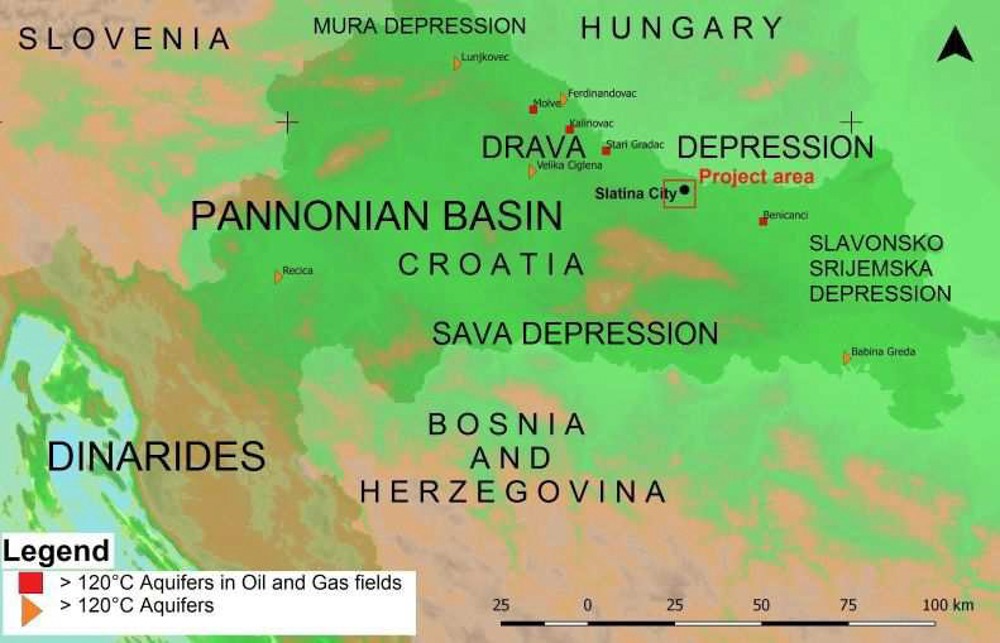 The Croatian part of the Pannonian Basin is divided into four depressions: the Drava Depression, Mura Depression, Sava Depression and Slavonija-Srijem Depression. Oil and gas reservoirs along with source rocks are placed in a neogene complex, which is divided into formations. Since the geothermal water is connected with oil and gas reservoirs, this division is applicable in the exploration of geothermal energy. Each depression has its own division (Table 1). Dominated lithology members are sandstones and marls, with oil and gas fields, formed in sandstone reservoirs from Lower Pannonian to Upper Pontian, while some reservoirs are also placed in eroded rocks of a pre-Tertiary complex. Reservoirs are screened lithologically, with marls, or tectonically, by faulting. Slatina is placed in the Croatian part of the Pannonian Basin in the Drava Depression (Figure 2).

Table 1: Lithostratigraphic division of the Croatian part of the Panonnian Basin (after INA – Naftaplin, 1988, simplified). 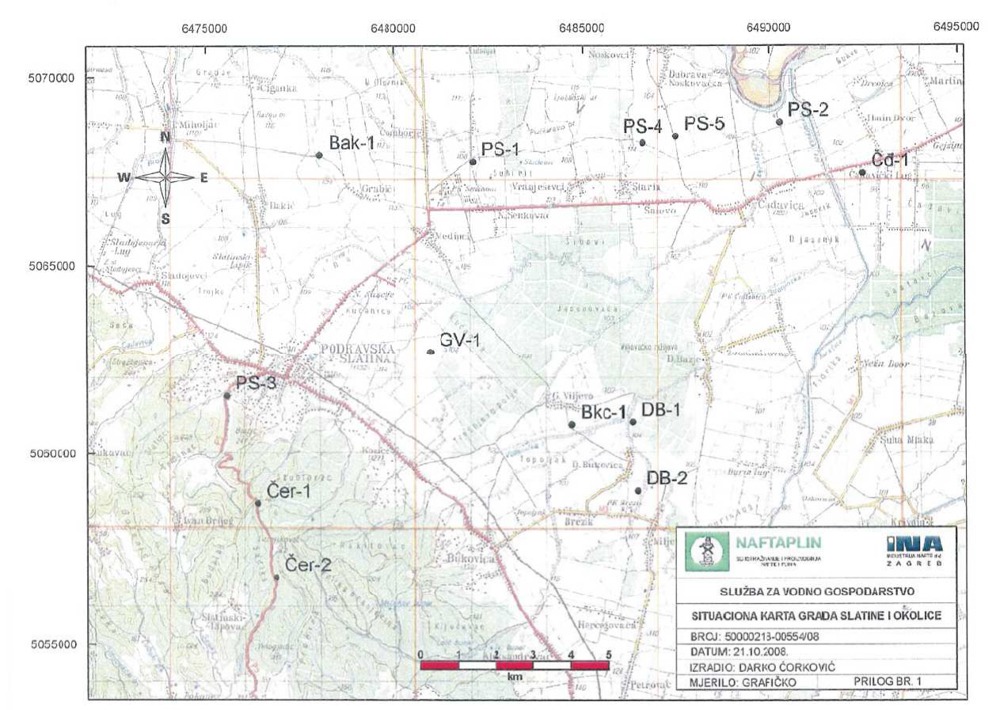 The temperature generally increases in depth, however at some intervals, the growth is unexpectedly sudden, and in some locations a decrease in temperature was recorded. Unfortunately, there are no detailed data on the measuring conditions so interpretation is limited by this factor. Most oil wells in the observed area were drilled between the 1960s and 1980s. At that time geothermal energy, with some exceptions, was generally not considered as a significant energetic source. Temperature loggings were made immediately after drilling, when infiltrated drilling mud was present in surrounding rocks of a well channel, which could affect the results of measurement. This could be an explanation for the drop in temperature in Well PS-5 in the interval between 3,900 to 4,500 m.

Considering the measured values in petroleum wells, a geothermic reservoir is classified as medium-temperature (100–200 °C), and geothermal energy from these reservoirs can be exploited for space heating, in various technological processes and for the production of electricity by the binary process. 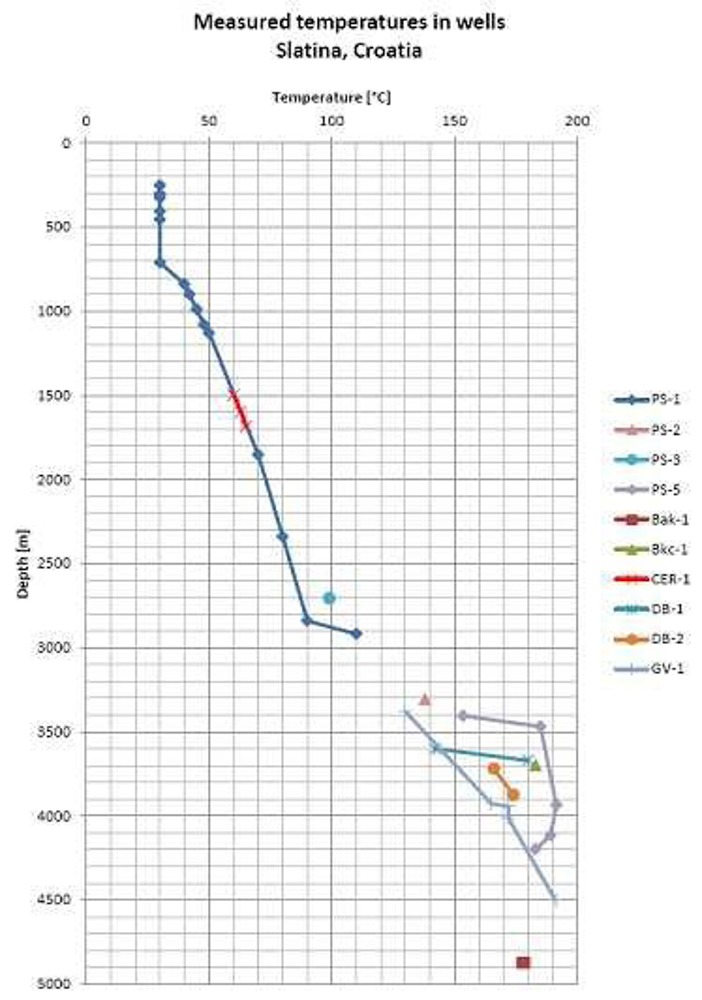 In order to determine the possibility of using geothermal water in the production process, the Icelandic company ISOR/EFLA reviewed the potential of the surrounding area for the exploitation of geothermal water.

Based on preliminary results, additional exploration activities on geothermal energy reservoirs were carried out in 2011. The studies included magnetic telemetry (MT) measurements on 61 probes. The principle of MT measurement is based on the detection of natural changes in the Earth’s magnetic field flux due to changes in the lithology in the underground, where the depth zones of different resistance are located, which in this case indicated the existence of geothermal fluids (ISOR/EFLA, 2011). MT measurements have established the location of fault zones, which would be the most appropriate goal for possible additional drilling to obtain greater yield.

The reserves were classified in compliance with the UNFC- 2009 classification (Tables 3 and 4) regarding the criteria of economic and social viability (E), the maturity of studies (F) and geological knowledge (G). Concerning the criteria of economic and social viability (E), present research results show sustained discharge for use of heat in a production process. The required capacity of 73 l/s is proven by previous well testing, and the minimum required temperature of 150°C was proven by well logging, so in part for direct use it can be considered as a commercial project.

The future power plant was classified as E2 (a future thermal power plant); according to data from similar projects in Croatia, its expected capacity is at least 2 to 5 times greater than required (Dukić, 2012), but to prove this, additional measurements of capacity are necessary.

Considering the maturity of studies (F), feasibility of extraction for direct use has been confirmed, but for the further phase, the development of the thermal power plant, additional research should confirm whether the required geothermal resources are present.

A rating of G2 was given for geological knowledge (G) – quantities associated with  a  known  deposit  that  can  be  estimated with  a  moderate level  of  confidence. G categories  may  be  used  discretely,  particularly  when  classifying  solid  minerals and quantities in  place, or in  cumulative form (e.g.  G1+G2), as is commonly applied for recoverable fluids (UNFC, 2009). Although the quantity is sufficient for the first phase, it is necessary to perform further investigations in order to define reserves of thermal water and to define the impact on the thermal water reservoir.

Table 3: Classification of the project regarding economic and social viability (E).

Table 4: Classification of the project regarding the maturity of studies (F) and geological knowledge (G).

Contribution to transfer to a low-carbon economy

In order to prevent dangerous climate change, in October 2014 the leaders of Member States adopted the Climate and Energy Policy Framework of the EU for the period from 2020 to 2030,  which includes a binding EU target of at least 40% lower greenhouse gas emissions by 2030 compared to 1990 (UNFC, 2009).

Rising energy prices and supply instability have led to a serious increase in interest in developing geothermal resources for electric power generation, and turned to a completely new way of understanding country’s geothermal potential  (Kolbah et al., 2015). The average energy capacity of geothermal direct heat consumption in Croatia is 3–4 MWt and it is expected that there is another 1,500 to 2,000 MWt, which could generate as much heat as 600 million m3 of natural gas per year (Kolbah et al., 2015).

Each terajoule obtained by combustion of methane emits 54.9 tons of CO2, that means the emission factor of Methane is 54.9 tCO2/TJ (Commission Regulation 601/2012), which means a decrease in greenhouse gas emissions by 95 tCO2 /day, or 34,627 tCO2 / year. These annual emissions of CO2 are relatively low, and an installation with these emissions would be classified as category A, but obtained experience is expected to enable development of further capacities in the future. Another stimulus can be found in the EUETS Directive 2003/87/EC, where it was prescribed that a significant part of the revenues generated from the auctioning of allowances should be used, among others, to develop renewable energies to meet the commitment of the EU to renewable energies (Article 10(3)). No free allocation shall be made in respect of any electricity production (from combustion) by new entrants (Article 10a(7)) and some allowances will be available to stimulate the construction and operation of projects that aim at the environmentally safe capture and geological storage (‘CCS’) of CO2, as well as innovative renewable energy and energy storage technologies (Article 10a(8)). That actually means destimulation of the production of electricity from fossil fuels and encouraging production from renewable sources.

A new paper factory planned in the Slatina area of Croatia will use geothermal energy. The Environmental Impact Assessment (ECOINA, 2013) proposed two phases of project development. In the first phase detailed monitoring of geothermal reservoir will be performed, and if it is feasible, a geothermal power plant will be installed in the second phase.

The first  phase  in  the  paper  factory  requires a capacity  of  73  l/s  with  a temperature between 150 and 200 °C. According to data from the Croatian national oil company INA (ISOR/EFLA, 2011), all existing wells are capable of ensuring the required capacity. Two wells of up to 4,000 meters deep are planned, one for exploitation and one for injection, at the factory location.

Since the original measurements were performed primarily for oil exploitation, it will be necessary to perform additional measurements along with the re-evaluation of previously performed measurements in  the older boreholes to  precisely define temperatures and capacities during  the  first  phase  of  geothermal energy exploitation in  order  to determine the feasibility of the electric power plant that is planned in the second phase.

Directive 2003/87/EC of the European Parliament and of the Council of 13 October 2003 establishing a system for greenhouse gas emission allowance trading within the Union and amending Council Directive 96/61/EC (Text with EEA relevance), ELI: http://data.europa.eu/eli/dir/2003/87/2018-04-08

INA Naftaplin (1988): Prikazi iz karte naftnih i plinskih polja – Illustrations from the map of Oil and Gas fields (In Croatian)

This article has been published in European Geologist Journal 47 – Geology and the energy transition.