Trials at the Urgeiriça flooded underground mine are a success

The UNEXMIN project is developing a technology capable of autonomous exploration and mapping of flooded mines. The robotic platform uses non-contact methods to gather geological, mineralogical and spatial data without major costs or risks associated. The field trials help the team to access the platform development and make improvements to the unique technology.

UNEXMIN has finished its third trial, at the Urgeiriça mine, Portugal, where it tested two robots to explore and map the galleries and tunnels of the flooded underground mine. Robots UX-1a and UX-1b were tested at different times with positive results.

The Urgeiriça trials were divided in two parts. The first run from 6th to 15th March. Here, the UX-1a robot was tested extensively at the same time as some of UX-1b’s instrumentation. The second part of the trials was held from the 1st to 7th April. The period inbetween was used to calibrate and improve the robots’ functionalities and equipment at INESC TEC’s laboratory.

The first part included testing with the robot with dives up to 104 m water depth. The entrances of the first four levels within the Urgeiriça mine were mapped (1st level at 30 m, 2nd at 60 m, 3rd at 85 m and the 4th at 110 m, below surface level). The entrance chamber of the 1st level is partially collapsed, so only a few metres were investigated. The 2nd level is collapsed after few metres so it could not be searched. The 3rd level is in good condition; this level was used in multiple test dives to trial different instruments. On the entrance of the 4th level, a granite wall with black veins was recorded by the multispectral camera.

During the second part, dives with the robots focused on their movement, navigation and mapping capabilities. These included tests involving pitch and roll movements, use of Structured Light Systems with UV-light – from where the team could identify some present mineralogy -, multibeam and other scientific instrumentation of relevance.

The UNEXMIN team is now channeling all its efforts to the preparation of the Ecton mine trial, in May 2019, the one that will ultimately prove the operability of the UNEXMIN technology in flooded mines. The outcomes of the research efforts will be presented during the project’s final conference in Brussels, on 26th September 2019. 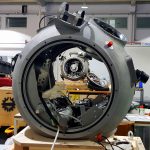 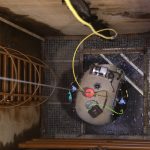 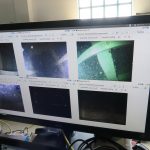