Promoting the Earth System approach and the meaning of learning

Although earth science is important in every aspect of our lives, there is a disturbing gap between its relevance to society and its low status in schools worldwide. One of the approaches to bridge this gap is the International Earth Science Olympiad (IESO). IESO is a unique educational Olympiad designed to promote the Earth System approach and the meaning of learning. International Team Field Investigation and the Earth System Project are two educational tools for promoting learning in a social context, based on the Earth System approach. The implementation of this progressive, novel educational approach within national curricula poses a formidable challenge and merits cooperation and support of the international geoscientific community.

Earth science touches almost every critical component of our life on Earth. As a result, the economy of every country is crucially dependent on its geological, hydrological, and atmospheric assets such as raw materials, mineral resources, energy resources, metals, water, and landscapes such as mountains, glaciers, lakes, rivers and deserts, which constitute the basis for the tourism industry. Earth science also deals with natural hazards such as earthquakes, hurricanes, floods, tornados, and landslides, which each year threaten billions of citizens worldwide.

Earth Science plays a pivotal role in promoting environmental literacy. It is connected with several central environmental issues. For example,

Other issues such as energy sources, producing raw materials and utilising natural resources are also crucial; citizens must become aware of and must internalise them. Thus, understanding earth science phenomena is crucial for the future of humankind. Earth science can endow citizens with knowledge and the ability to draw conclusions about saving energy, effective use of energy resources, saving water, and the proper use of the Earth’s resources. Citizens who better understand their environment and its processes will be able to better judge and evaluate the changes that occur and, as a result, will behave in a more scientifically literate and environmentally responsible way. The economic and environmental aspects that make earth science highly relevant to responsible citizenship are well documented and acknowledged (Achieve Inc., 2013; Cheek, 2010; LaDue & Clark, 2012).

Despite the crucial importance and relevance of earth science to humankind, recent surveys (Greco & Almberg, 2018) have revealed that earth science education in schools worldwide continues to have as low a profile as in the previous century (Orion et al., 1999).

The International Geoscience Education Organization (IGEO; www.igeoscied.org) was formally launched in 2000. Its main aims are to promote earth science education at all levels, to enhance public awareness of earth science across the globe and to bridge the disturbing gap between the importance of earth science to humanity and its low profile in schools worldwide. These goals are promoted by IGEO’s activities, some of which are listed below:

The International Earth Science Olympiad (IESO) is an annual earth science event for secondary school students.  It is the flagship activity of IGEO and a platform to expose both school students and geoscience educators to the innovative earth system educational approach.

While all scientific educational Olympiads follow the idea of Olympic games, IESO resonated with the spirit of Pierre de Coubertin, the founder of the modern day Olympic Games, who viewed Olympics as a means for promoting brotherhood and closeness among peoples. His philosophy was “In these Olympiads, the important thing is not winning, but taking part” (Durry, 1997).

The objectives of IESO are to (a) raise student interest in and public awareness of earth science, enhance earth science learning of school students, (b) improve the teaching of earth science in schools, (c) promote international cooperation in exchanging ideas and materials about earth science and earth science education, and (d) encourage friendly relationships among young learners from different countries, and (e) promote talented and gifted students in earth science.

In promoting these goals, the IESO lays special emphasis on the earth system, and this provides better visibility of earth science in the eyes of students, teachers and common people, and helps teachers in teaching earth science more effectively.

So far, 53 national teams have participated in IESO, including 17 from Europe. Each national team comprises a maximum of four students and two mentors. Only secondary school students are eligible for participation in IESO. Further, they must not have entered a college or university while participating in IESO. Mentors must be earth science educators or earth scientists with some background in school teaching. They are expected to contribute and discuss questions for IESO, and translate them into their native language, if necessary. They must present the status of earth science education in their countries, including aspects like strategies adopted to promote earth science education, what could be achieved and the obstacles faced.

A major attraction for students and particularly for some mentors is the medals. However, IGEO considers IESO as a vehicle for promoting earth science education, and the medals awarded thereof as only “toffees” to students.

The assignments/activities of IESO

All activities of IESO (https://www.ieso-info.org/) are based on system thinking skills, critical analysis, team work, field observations, data collection, Internet searching for reliable information, and communication skills (oral and textual). The common thread that runs through all assignments in IESO is the earth system approach – the understanding that Planet Earth is one single system, comprising various subsystems that interact amongst themselves. We consider that it is important to impress this concept upon young minds.

Like other Olympiads, IESO includes individual tests – written test and field and lab practical tests. However, this article focuses on the other components of IESO – the cooperative activities – that are unique and special when compared to other science Olympiads. They promote teamwork, international co-operation and collaboration, and forge bridges of friendship among young students across the world.

The two co-operation activities are the International Team Field Investigation (ITFI) and the Earth System Project (ESP). The spirit behind these activities is co-operation, and the coming together, mingling and working together of students from different nationalities, diverse cultures and varied backgrounds. This is particularly important today, and even more so in future, because major strides in scientific research are no longer possible through the efforts of individuals but rather through groups of scientists.

Each team typically consists of 6–8 students drawn from different national teams; efforts are made that they represent a wide spectrum of cultures, socio-economic development, languages, etc. This ensures that they not only work on the ITFI and ESP assignments, but also exchange ideas and information about their countries and cultures, lives and lifestyles. Such interactions, though only for a few days, have created such strong bonds among participating students that they keep in touch years after participating in IESO.

This is an assignment which poses a research question pertaining to a concrete earth system phenomenon in a field site. The selection of the studied phenomena is based on the following criteria:

Table 1 presents eight suggestions of generic ITFI projects. To meet the ITFI criteria, IESO organizers must closely collaborate with geoscientists from universities located close to the IESO venue both in the design and implementation stages.

Each multinational team is provided with minimal basic information and data for the site. The team carries out field investigations at the site, collects relevant field data, takes photographs, and makes field notes. 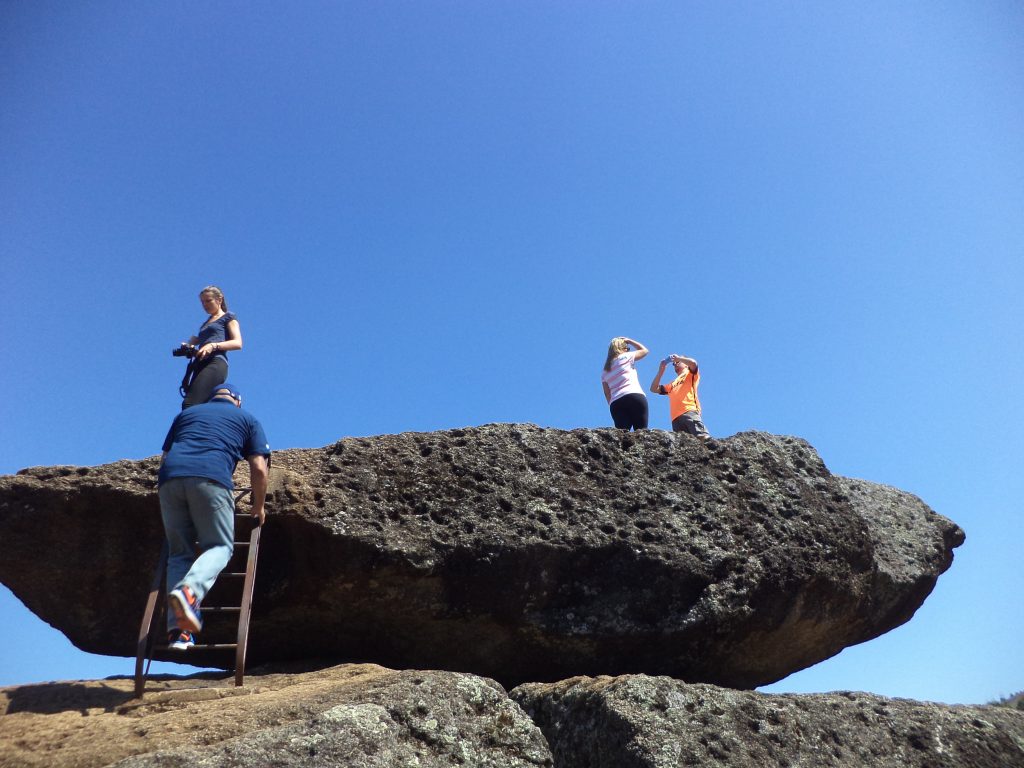 Figure 2: ITFI members trying to answer the question “Why does this rock have this shape?” IESO, Pocos de Caldas, Brazil, 2015.

Off site, team members search the Internet for more information, discuss the data collected and the data provided by the organisers, and build hypotheses to answer the research questions. The team has to engage in logical scientific argumentation, i.e., develop a logical sequence that progresses from observations to conclusions, by using geological principles, common knowledge that is related to the geological principles and external information. The team is encouraged to come up with as many hypotheses as are feasible given the field observations and data for the site, discuss the strengths and weaknesses of each hypothesis and reject or accept them – the way a research scientist does.

Finally, the team has to present its findings through a 12-minute slide presentation in front of all students, mentors and observers, followed by a 3-minute discussion.

It is important to distinguish ITFI from practical tests. The former poses research questions about long-term earth system phenomena and the use of field/lab analytical instruments, whereas the latter is based on field investigations of a small-scale geological exposure. The ITFI is a teamwork task and it encompasses all the components of open-minded scientific research, whereas a practical test requires ticking multiple-choice answers to short and clear questions.

A major challenge for IESO is to showcase the current state of 21st century science in general and earth science in particular. To address this challenge, a new activity called the “Earth System Project” was introduced at the 7th IESO organized in India in 2013 (https://ieso2013.webs.com). A phenomenon that is local or regional for the host country is proposed as the research project/topic for ESP. The phenomenon must involve many sub-spheres of Planet Earth and must impact the economy, the lives and the society of the host country.

Multinational groups of students research the topic using and analysing the data they collect from the Internet. They discuss various aspects of the topic, including the origin, processes involved, earth system interactions, and impacts on biosphere (including humans) and remedial measures, if relevant. They present their results and findings in the form of posters that are viewed by students, mentors and observers. 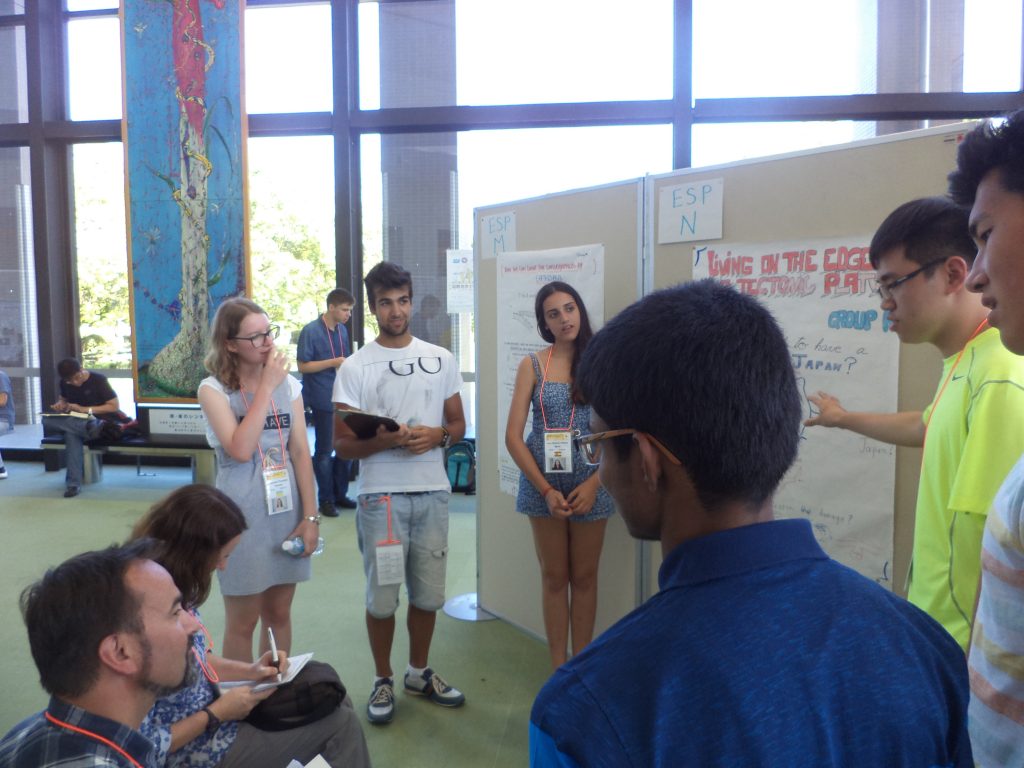 Figure 3: An ESP team explaining their project to jury members through their poster, IESO, Mie, Japan, 2016.

The educational message of IESO

As mentioned earlier, the objective of IGEO and IESO is improving the quality of earth science education in schools. Several mentors and observers that lead national teams to IESO are school teachers. Therefore, IESO also includes workshops for mentors and discussions on aspects of importance and relevance to earth science education. Moreover, students and mentors are taken on a visit to local secondary schools. They visit the school facilities and interact with students and teachers of the local school to exchange information on syllabus, best practices in teaching, problems faced, etc. 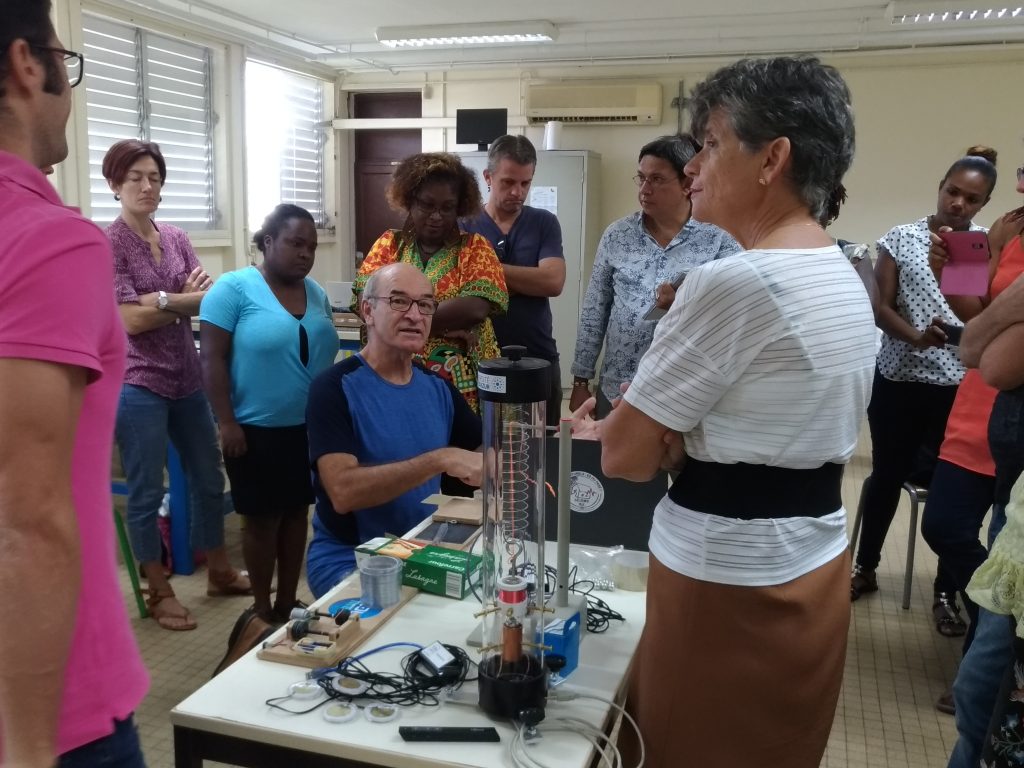 Conclusions – the contributions of IESO to promote earth science education

Shankar (2019) gave a detailed account of how IESO over the years has contributed to earth science education and a better visibility for earth science. Among others, he mentioned IESO’s contributions such as

Exposure to field studies can attract young minds. The awareness that earth science is “the great outdoors” can sustain students’ interest in this discipline. The following transitions have been crucial:

IESO holds great potential but unfortunately, this has not been realised effectively (Greco & Almberg, 2018). A possible reason for this situation could be that many mentors in IESO are geoscientists and not geoscience educators. A second possible reason could be that whereas IGEO views IESO as a tool to promote effective earth science education worldwide, many of the mentors may view IESO purely as a competition.

The conservative attitude of some of the mentors towards IESO’s goals needs to be changed to enable a stronger connection with the geoscientific community. We hope that participation of mentors in intensive workshops in the future on effective implementation of the progressive educational assignments of IESO may help them promote ESE in their respective countries.

Orion (2017) claimed that the tendency of geoscientists worldwide to stay away from public activity, including the educational system, amplifies the disturbing gap between the importance and relevance of Earth science to society and its low status in schools worldwide. A profound change in the status of Earth science education in schools demands a profound change in the attitude of geoscientists towards their social responsibility. This responsibility is part of the professional geoethics of a geoscientist (Di Capua et al., 2017).

This article has been published in European Geologist Journal 50 – Let’s become geologists! Challenges and opportunities in geoscience education in Europe