ProSkill: Be an engineer of the present, with the most prized skills of the future!

EFG recently participated in the ProSkill project Kick off Meeting in Miskolc, Hungary. The project has just started with the objective to develop a Skill Ecosystem in the Visegrád Four countries (Hungary, Slovakia, Poland, Czech Republic).

ProSkill Partners are aware that the employees of the future will have to adapt to new challenges and possess multidisciplinary skills. They have to have in-depth knowledge in one area, but also be able to speak the language of business and social sides. In ProSkill, a skill ecosystem strategy is developed to reduce the negative effects of skill problems. To implement it a pilot project is launched with the direct and active participation of colleges for advanced studies.

The two-day ProSkill Kick of Meeting served as a starting point to develop the project, review the expected outputs, reports, events and plan ahead for 2020. The Consortium includes the University of Miskolc, Silesian University of Technology, Slovak University of Technology in Bratislava, Technical University of Ostrava and the European Federation of Geologists, leading the Communication and Dissemination work package. The project is also participating in the Earth Day event series in April, through the Universities, with Recycling and re-use of Raw Materials theme (to be confirmed). 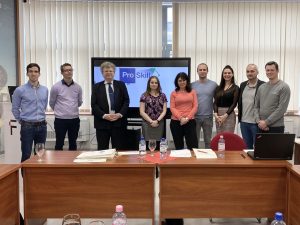