Press release: Field demonstration of ¡VAMOS! technology is a success at Silvermines, Ireland

On the 24th of October the ¡VAMOS! partners together with Advisory Board members and interested external parties – such as geologists and researchers from companies and institutions, local people, etc. – were present at the ¡VAMOS! technology Demonstration Day, at the Magcobar flooded mine pit, in Silvermines, Ireland. In total 85 visitors participated in the field demonstration to raise awareness of the innovative technology with stakeholders and local communities.

The ¡VAMOS! project is funded by the European Union´s Horizon 2020 research and innovation programme. Featuring a total of sixteen partners from nine EU countries, ¡VAMOS! seeks to address the EU’s need for (critical) raw materials, by making possible the extraction of mineral deposits from inland water-bearing areas. To reach this aim, the partners have developed an innovative system whereby a remotely operated mining vehicle is launched from a waterborne carriage. 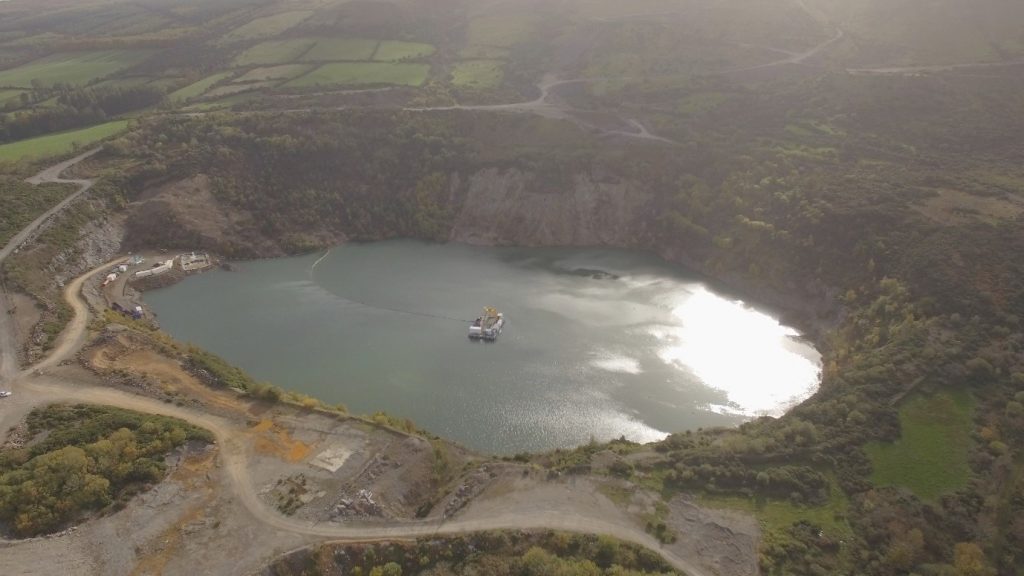 The Demo Day started with an essential briefing that covered an introduction to the ¡VAMOS! concept, legal issues, logistics and practicalities for the visit. The briefing included an interesting talk about the future plans for the brownfield site involving the development and construction of a 360 megawatt, zero-emission hydro power station on the open-cast mining site, which has been closed since 1993.

In addition, there were presentations on the regional and site geology and historical mining heritage. The session ended with the important safety briefing before participants were transported to the mine site.

The visit to the ¡VAMOS! mining technology at work started on shore, with the participants being shown “EVA”, an automated underwater vehicle that is used to assist in precise positioning, navigation and situational awareness of the Mining Vehicle and its surrounding environment, and that can execute preliminary surveys of underwater mine sites. 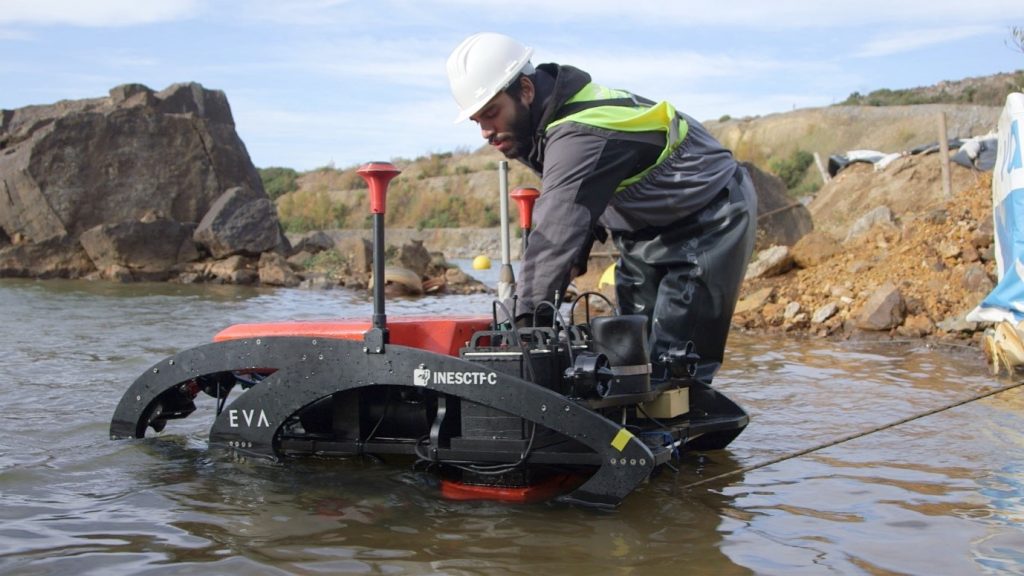 The visitors were then taken by tender boat across the lake to the Launch & Recovery Vessel, where they were able to view the Mining Vehicle being deployed and winched up from the bottom of the mine where it has been working in recent weeks at various depths up to 57m, cutting in various rock and operating conditions, and pumping the cut material to a deposit on shore as a slurry. 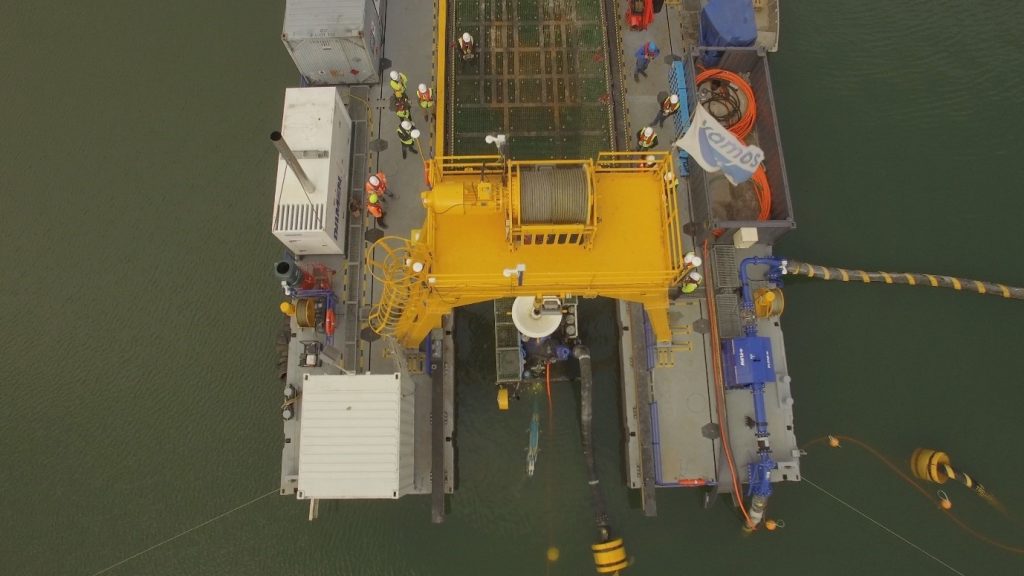 Visitors were then shown the Control Cabin and Data Centre, the hub of the ¡VAMOS! project during the trials. Here they had a hands-on experience with the virtual reality human-machine interface. From here, all the components of the technology are controlled and real-time data on the operations is collected. In combination with sensors and sampling in and around the pit registering water quality, the VR system is also used as an environmental compliance monitoring tool. 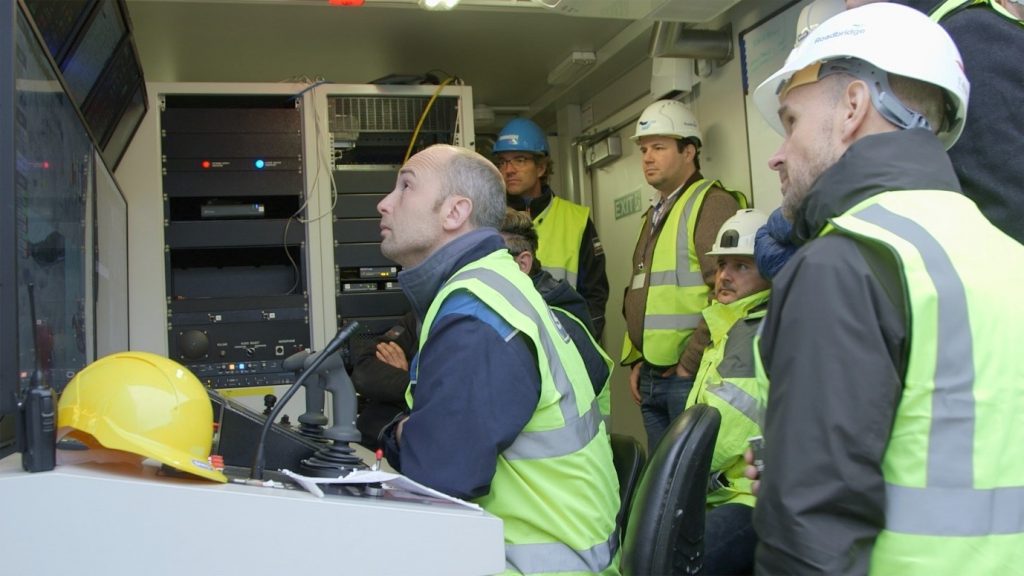 Participants were asked to give feedback after the visit on their thoughts with regards to future exploitation of a system such as ¡VAMOS! and visitors coming from the community around Silvermines were asked about their perception of the operation taking place in their neighbourhood.

“The ¡VAMOS! team has successfully demonstrated their ability to use the prototype mining system in very hard rock. State-of-the-art electronics and visualisation has been used to control the operations. All this was done with great consciousness and care for safety, the environment and involvement of local stakeholders.” said Sander Steenbrink, General Manager Corporate Research and Development at Boskalis from the Netherlands, and Advisory Board member for the ¡VAMOS! Project.

At the end of the day, the project team was very happy with the results of both the demonstration as and the publicity generated, which reached experts in the geology and underwater fields as well as local governments and communities.

The ¡VAMOS! trials will conclude early November, after which the on-site team – consisting of SMD, Damen, Sandvik, InescTEC, Fugro, Zentrum für Telematik, Fugro and BMT Group Ltd – will demobilise from the Irish site. In the coming months the test results will be evaluated, and reporting to the EU will follow.

The European Federation of Geologists (EFG) is involved in the project’s stakeholder engagement and dissemination activities.