One Day in Europe – Italy

One Day in Europe is a feature of EFG’s monthly newsletter GeoNews. Each month we travel to one of EFG’s national membership associations and discover their main activities and challenges. In June 2018 we have visited Italy and talked to the President of the Italian National Assocation CNG, Francesco Peduto.

The Italian National Council of Geologists (CNG) is the national organization in Italy which has the legislated authority to register professional geoscientists and regulate geosciences practice in Italy. It is the largest national association within EFG representing more than 11000 individual members from the academic and professional sectors. 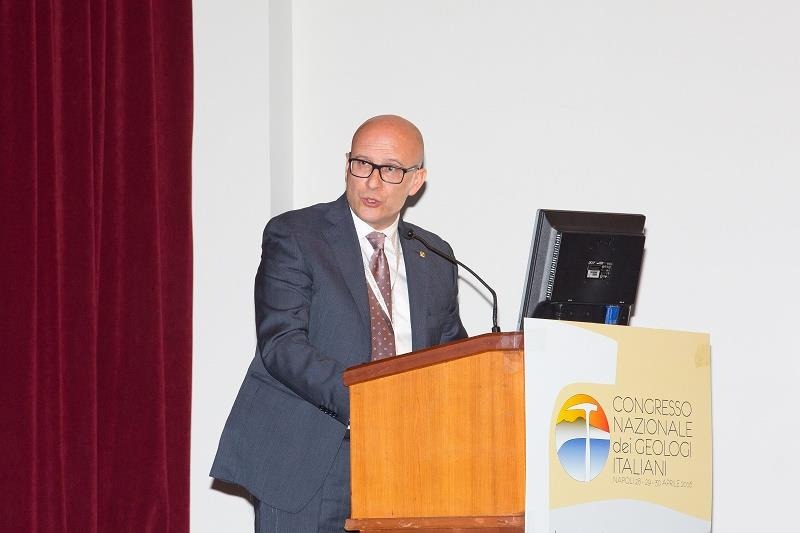 Francesco Peduto is the President of the Consiglio Nazionale dei Geologi. He was born in Salerno (southwestern Italy) in 1958 and graduated with honours in Geological Sciences at the University of Naples “Federico II” in 1983. He is an expert geologist in soil protection and civil protection. He addressed these issues both at a professional level, also with responsibility roles during the hydrogeological emergency in Campania (Southern Italy region) in 1998 (Sarno’s disaster), and at a scientific level, producing publications, geological maps and informative articles. He has been President of the Italian National Association (CNG) since December 2015 and he is a member of the “Control Room” of ITALIASICURA, the Mission Structure of the Italian Government against hydrogeological instability and he is a member of the National Observatory for Post-Earthquake Reconstruction Central Italy 2016 (also set up by the Italian Government).

What are currently the main challenges for your association?

In summary, the challenges we face can be summed up in three points:

In this year we have already achieved important goals and many main missions that we have made available to Italian geologists. I briefly remember the presence in important State institutions representing the category of geologists, such as ItaliaSicura (the Mission Structure of the Italian Government against hydrogeological instability) and the National Observatory for post-earthquake reconstruction Central Italy 2016, the contributions for the adoption of rules and regulations in the technical-administrative field, etc… We have also activated and provided all professional geologists with basic professional insurance and implemented services for our peripheral organizational structures (the Regional Orders of Geologists), such as legal advice, support for privacy protection and transparency requirements, a platform for continuous professional updating (mandatory in Italy), the joint collection of geologists’ registration fees, etc… In Italy, the political decision-makers have recently been renewed, so in the coming months we also intend to re-establish relations with the new political representatives.

Are you in contact with decision makers at national level? If yes, in which field?

The Consiglio Nazionale dei Geologi is not an association, but an institution: we are a non-economic public entity that depends on the Ministry of Justice and we interact continuously with all Italian political institutions. For example, we are called to a hearing in Parliament on the draft laws of our interest, in Parliament we make initiatives (meetings, debates, conferences, etc.), we have relations with many ministries and almost always we involve political representatives in our initiatives in society and on the ground.

Can you think of any specific activities you would like to carry out to promote geology towards society?

Certainly. In Italy we do this normally and continuously. I would like to cite, as an example, an initiative that we did last year, and we are also organising for 2018: it is called “At school with the geologist”. Last year we were in about 300 Italian schools, explaining what geology is and the work of geologists, talking about georisks (Italy is a country with a high seismic, hydrogeological and volcanic hazard) and we explained to students the correct behaviour to adopt during an earthquake, a landslide, a flood, etc…

Do you collaborate with other organisations at national level, either in the field of earth sciences or in other sectors?

We have relationships with universities, with the Italian Geological Society and with all the other institutions and associations working in the field of geology. We organize events, conferences and many activities together, in addition to collaborative relationships and mutual support for every need. In Italy, we have also established the “Network of Technical Professions” (RPT), an association to which nine technical professions have adhered, including geologists, architects and engineers, with whom we carry out all actions and activities of mutual interest, including institutional ones.

Do you organise joint activities with EFG member associations in other European countries or similar international organisations?

An interesting experience is that of the “Network of Technical Professions” (RPT), which I suppose does not exist in other European countries, thanks to which we have been able to do many important things. Through the RPT, especially at political and institutional level, we have had great ability to influence decisions. It’s easy to understand that there is a difference between the category of geologist which includes about 13.000 individual members, and the entire category of technical professionals, which represents more than 600.000 members.

How would you define EFG’s role for the profession of geoscientists at a European and a global level?

It is certainly an important point of reference for all European and global professional geologists: the title is also recognized by the American, Australian and South African associations. For this reason, this federation is also important for Italian geologists who wish to work outside their own country with the recognition of their area of expertise. In my opinion, EGF’s role is very important for the profession of geoscientists and many other initiatives could be developed, starting with those relating to greater interaction and comparison with European institutions and political decision-makers.

What does the European Geologist title represent for you?

European Geologist title is a crucial and strategic certificate thanks to which geologists of different nationalities can have their competence and professionalism recognized beyond national borders. In this way, it is a strategic title, essential for anyone who wants to expand their job opportunities by turning, with keen eyes, to the opportunities of the European and world markets.

What are your general hopes for the future of the profession of geologists and how can national and international associations help build that future?

Despite the difficult economic times of many European nations, including Italy, I am optimistic about the profession of geologist. Georisks and geo-resources, the construction field, the environment and the landscape, new market opportunities: these are all themes that today and tomorrow will always be central to the agendas of governments. For this reason, I can hardly imagine a future where geologists do not have an important role in society and at the political-institutional level. Obviously we represent the category of geologists and we must do our part, with communication, in society and institutions, lobbying at political level, to understand the importance of the profession of geologist and to consolidate its role, both at the level of the individual nation and at European level. In this perspective, we are ready for further and greater commitments, including in the context of the EFG.