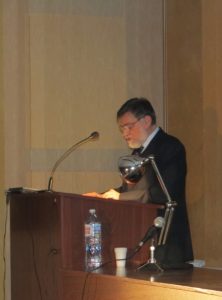 Our dear colleague, a friend and former president of the Serbian Geological Society Prof. Dr. Nenad Banjac passed away after a severe illness on April 23rd, 2019 in Belgrade.

Nenad Banjac, retired full professor at the Faculty of Mining and Geology in Belgrade, started working at the Seismological Institute of the Republic of Serbia after completing his studies at the same faculty. He worked there until 1987 when he moved to the Faculty of Mining and Geology. At the faculty, he built an academic career from a teaching assistant to a full professor, and during that period he was the author and co-author of more than 60 papers published in renowned journals. At the beginning of his career, as an associate with expertise in seismotectonics at the Seismological Institute in Belgrade, he studied the geological structures of the territory of Serbia and its specificities related to the occurrence of earthquakes. Later, he primarily dealt with stratigraphy and biostratigraphy of Mesozoic. In addition, he was the author of one textbook, three chapters in monographs and a participant in several professional and scientific projects. Special attention should be paid to the long-term editing of the edition of the Geological Bibliography of Serbia. In addition to regular work as a university worker, he also performed a number of functions at the home faculty and the University of Belgrade. He retired in 2017 from the position of a full professor and the Head of the Geological Department of the Faculty of Mining and Geology in Belgrade.

His work was marked by a long term engagement in the activities of the Serbian Geological Society. Since 1988, he was directly involved in the activities of the SGS Managing Board, first as a treasurer (1988-1992), then as secretary (1998-2002), only to be elected president in 2008 and to perform this function until 2012. After that, he spent four years (2012-2016) serving as a former president who has an advisory role in the SGS Managing Board.

In the period of the crisis in the Society’s work (1998/1999) he was especially active in reestablishing the legal status of the Society, as well as in its activities.

In his work in the Society, he was also remembered as a top chronicler of the history of geology, both in Serbia and abroad. He utilized this inclination into the activities of the Section for the History of Geology, and his work on the monograph of 125 years of the Serbian Geological Society was especially noticeable. E

Serbian Geological Society greatly enhanced its activity and role in the EFG during Mr Banjac’s presidency. Lately he was an active member in EFG Panel of Experts on Education.

Serbian geologists will remember Nenad Banjac, not only as a good professor, but also as a wonderful colleague, a mild-mannered person striving for compromises, and above all, as a good friend.