The Board of the European Federation of Geologists (EFG) expresses its heartfelt condolences to Harry’s family. Harry made a lasting impression on all those in the EFG who met him during his long and distinguished international career, both through participation in PERC/CRIRSCO meetings in Europe and through Harry’s membership of the advisory panel for the INTRAW project 2014-2016. He was a consummate professional, combining his wealth of expertise and experience with his considerable and unique communication skills – particularly his special gift of listening more and speaking and writing sparingly, only after first giving his response careful consideration. 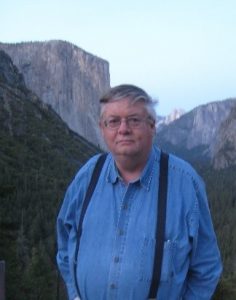 Harry was born in New York on 7 February, 1946.  Harry’s youth was spent in the outdoors while his father worked for the National Park Service as a ranger and naturalist at the Grand Tetons, Crater Lake, and Yosemite National Parks, as well as a stint at the NPS offices in Virginia.  Harry was introduced to geology by his mother, Katharine, who had an AB in Geology from Radcliffe College and a Masters in Religious Education from Union Theological Seminary.  Geology courses for Radcliffe were taught at Harvard, where Katharine had to take notes from the hallway because women were not allowed in the classroom.  She followed with graduate courses in geology at the University of California at Berkeley.  Harry was particularly proud that she later co-founded the Julian’s Anchorage Home for Battered Women in San Diego.

Harry graduated from St Andrews High School, Middletown, Delaware in 1964.  The school is best known for its portrayal in the film “Dead Poet’s Society”.  His first degree was a BSc (honors) geology, from Stanford University, conferred in 1967.  This was followed in 1969 by an AM in Geology, from Harvard.  Harry returned to school at Stanford in the early-1970s, obtaining an MSc in statistics (1974), and a PhD in geology (1975).  His doctoral thesis was the second PhD awarded in geostatistics in the US, and developed the approach of using conditional probability distributions to forecast recoverable resources, an approach which is still in use within today’s mining industry.

From 1965 to 1975, in and around his studies, Harry worked for the Hanna Mining Company, with duties that ranged from grass-roots exploration to reserves estimation to mine geology.  It was this experience which led to his Stanford nickname of ‘Dr.  Bucks’.  In late 1975, he joined Fluor Corporation, where he focused on resource and reserve estimation, audits, due diligence investigations and geostatistical analysis and problem-solving.  He wryly observed “I was given two No. 2 pencils and a writing pad.  The second day I was given a timesheet; I wised up quickly that I was expected to find a job to charge”.  He left Fluor in 1989 to co-found Mineral Resources Development Inc (MRDI), now part of the John Wood Group plc.  MRDI provided Harry with seminal work experiences in the realms of resource estimation, expert witness testimonies, valuations, geostatistical analysis of geometallurgy, reconciliation, and considerations of resource classification.  He developed specialist software for aspects of data verification and resource estimation that were not commercially available at the time.  Harry could never refuse the lure of a new project or investigating how a pet project had advanced, and was actively engaged with projects with Wood at the time of his passing.

Harry published more than 40 technical papers over the course of his career.  His wide-ranging commodity experience included Cu, Co, Au, Mo, U, coal, oil shale, Ni, Fe, Mn, PGE, diamonds, K, Pb, Zn, Ag, Sn, and alumina.  He worked in 17 states within the US, eight Canadian provinces, and 35 countries outside North America.  Harry was proud that he had broken a chair on every continent, except Antarctica, and this was only because “all chairs there were metal”.

He was a member of an impressive number of societies and professional associations, amongst them the Society for Mining, Metallurgy and Exploration (SME), the Australasian Institute of Mining and Metallurgy (AusIMM), the Australian Institute of Geoscientists (AIG), Geological Society of America (GSA), Society of Economic Geologists (SEG), Institute of Materials, Minerals and Mining (IMMM), and the International Association for Mathematical Geology (IAMG).  Harry was registered as a Professional Geologist in California, Arizona, and Minnesota.

Harry served with distinction on the Committee for Mineral Reserves International Reporting Standards (CRIRSCO) from 2007 to 2018, including as Deputy Chairman from 2013, Chairman from 2015–2016, and Past Chairman from 2016–2017.  Harry played a pivotal role in assisting potential member countries to meet the criteria for membership of CRIRSCO, such as Mongolia, Brazil, Kazakhstan, India and Turkey, and continued to assist China with their progress toward membership.

Harry’s contribution to the world of geology and geostatistics was recognized by numerous bodies.  He was awarded the AusIMM’s Institute Medal in 2019, the SME’s President’s Citation in 2017, the SME’s Award for Competence and Ethics in 2012, and the Southwest Mining Foundation’s American Mining Hall of Fame Medal of Merit in 2007.  He was made an Honorary Life Member of the Geostatistical Association of Australia, an Honorary Fellow of the Professional Society of the Independent Subsoil Experts of Kazakhstan, and an Honorary Representative of CRIRSCO.  He was also conferred the Mongolian Best Geologist Award in 2015, and given APCOM Recognition Awards in 2015 and 2017.

Harry, reflecting on his industry time, identified a number of milestone projects, or as he called them, “character-builders”.  In 1978, he pioneered the use of sequential Gaussian conditional simulation in the U.S., using the technique to determine the effect of variable drill spacing on the reliability of uranium reserves.  1981 saw the completion of a due diligence valuation of domestic minerals assets for St Joe Minerals, or “$500 million in five days”.  In the 1990s, he developed unique approaches to estimating mineral resources for Bingham Canyon Cu, Goldstrike Au and Escondida Norte Cu, as well as grade controls for Jerritt Canyon Au.  He led the independent valuation of all mineral assets (mines and prospects) to support the privatization of Brazil’s CVRD, and led the preparation of Technical and Competent Person’s Reports to support privatization of Zambia’s state-owned ZCCM.  He was a key player in the resource estimation methodologies developed for the Antamina mine in Peru during 2000–2009, including developing software to perform rapid exploratory data analysis.  In 2006, he described the F-factor concept, the closest to a standard that the industry currently has for reconciliation.  The second decade of the 21st century saw Harry immersed in the resource estimation for some the largest modern copper discoveries, at Kamoa–Kakula and Oyu Tolgoi.  Harry noted, in late 2019, that “overall, it has been an interesting time.  I have many memories, mostly good, of hard work that resulted in a good quality end result”.

Harry’s quixotic interests, from an airsick bag collection that made the Guinness Book of Records, to trilobites, to food and wine, and Porsches, enlivened many a long day on the job.  His always inquisitive spirit, intense curiosity over the natural world, enquiring mind, constant questioning, insatiable thirst for data, and relentless focus on geology over geostatistics was truly inspirational:  Harry’s catch-phrase “in general, an ounce of geology is worth a pound of geostatistics; this may be disappointing to geostatisticians with no geological background; tough” is still widely referenced.

Harry was always willing to give time to juniors and peers within the profession, and was equally adept at communicating cutting-edge techniques as explaining the basics.  He shared his knowledge and tools willingly.  Harry facilitated and celebrated the successes of others.  He was known for listening much, and speaking only when he had carefully decided what should be said—he could provide unvarnished opinions without offending.  Harry was highly regarded for his knowledge, integrity, hard work, and new ideas, as much as his generosity, kindness, and respect.

It was a privilege to call Harry a mentor, a peer, and a good friend.