The cretaceous clays of Baiso, Emilia-Romagna, Italy: A study for their touristic promotion

The Baiso area of Italy is characterised by extensive badland formations featuring polychrome clays, thus giving rise to outstanding unique landscapes identified as important geological sites. This geological framework has given rise to the industrial specificity of the area, which has become important for the clay supply for the Sassuolo and Casalgrande ceramic district over the past few decades. A recent multidisciplinary study analysed the strengths ​​and weaknesses of this environment, with the aim of identifying an innovative strategy to transform the areas affected by mining activities into an opportunity for environmental regeneration and an in-depth source of information on geology and geoheritage, incorporating tourist trails past various landscape features and abandoned mining operations.

The flysch complexes (Multi-coloured clays, Argille Varicolori del Casale) are found in a portion of the Baiso territory, in the Northern Province of Reggio Emilia, Italy (Figure 1). They date from the Cretaceous period and were formed in a reducing environment of an abyssal plain (Bettelli, 1986; Bettelli et al., 1989; Papani et al., 2002). The tectonic events that led to the development of the Apennines disrupted the original sedimentary structure, at the same time creating the outstanding shape that marks the local landscape (Figure 2). 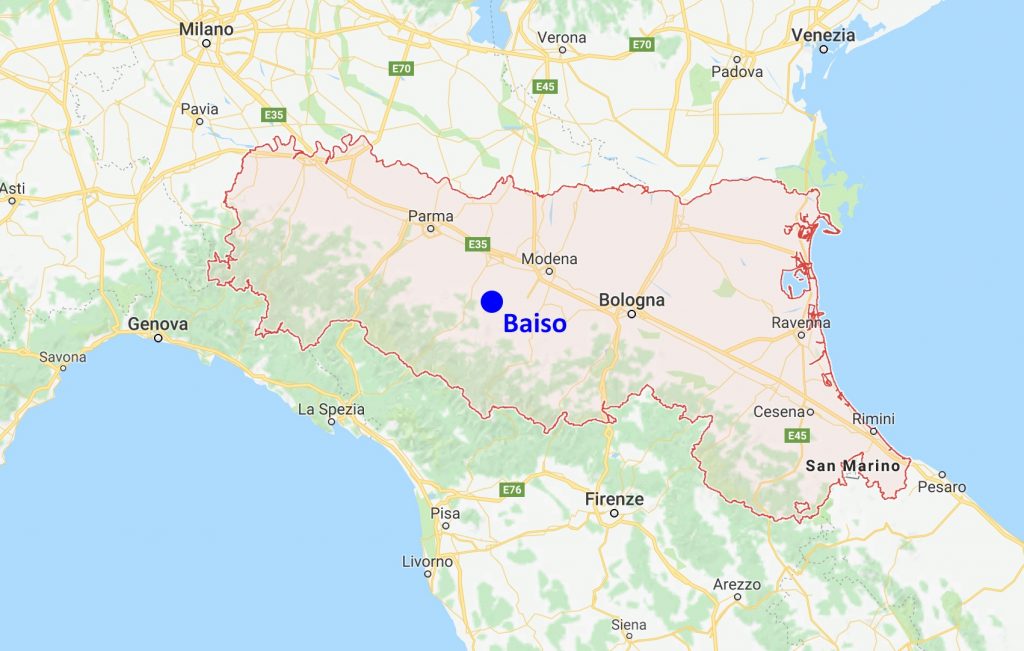 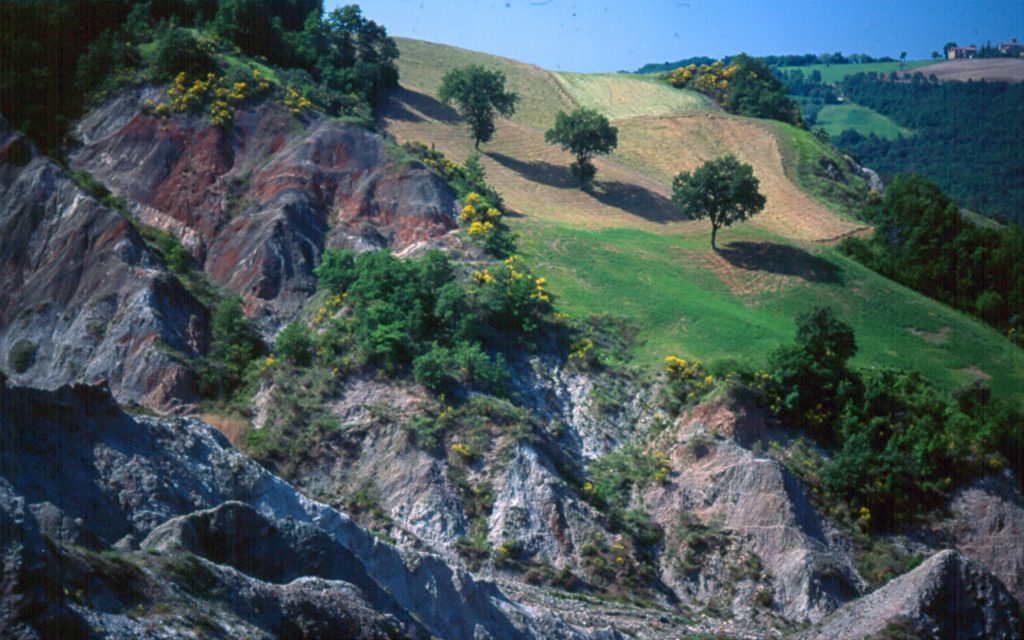 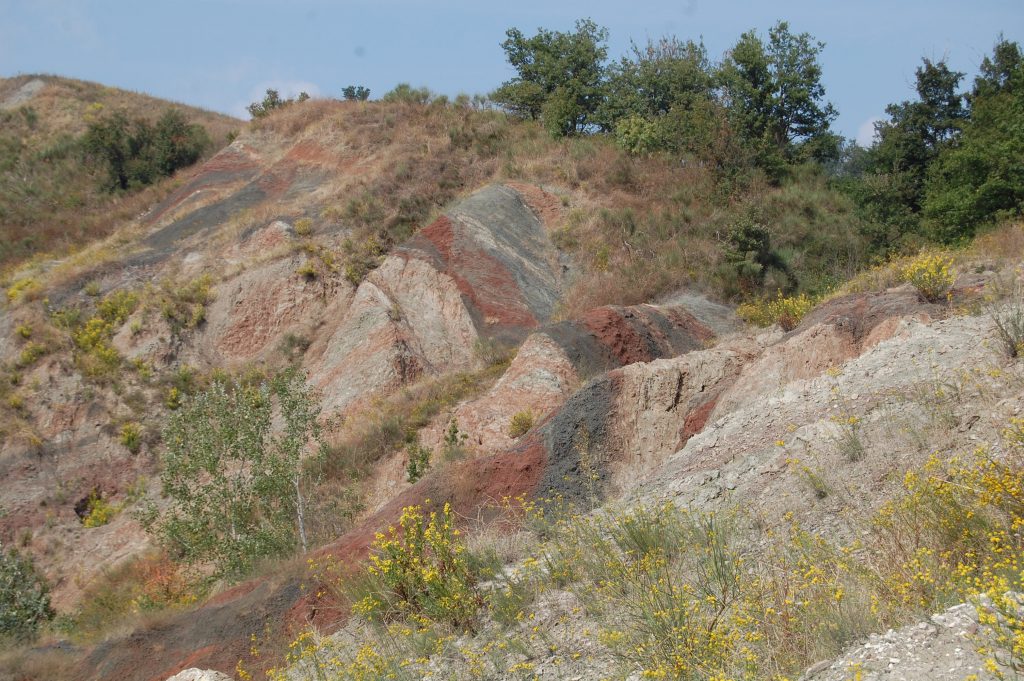 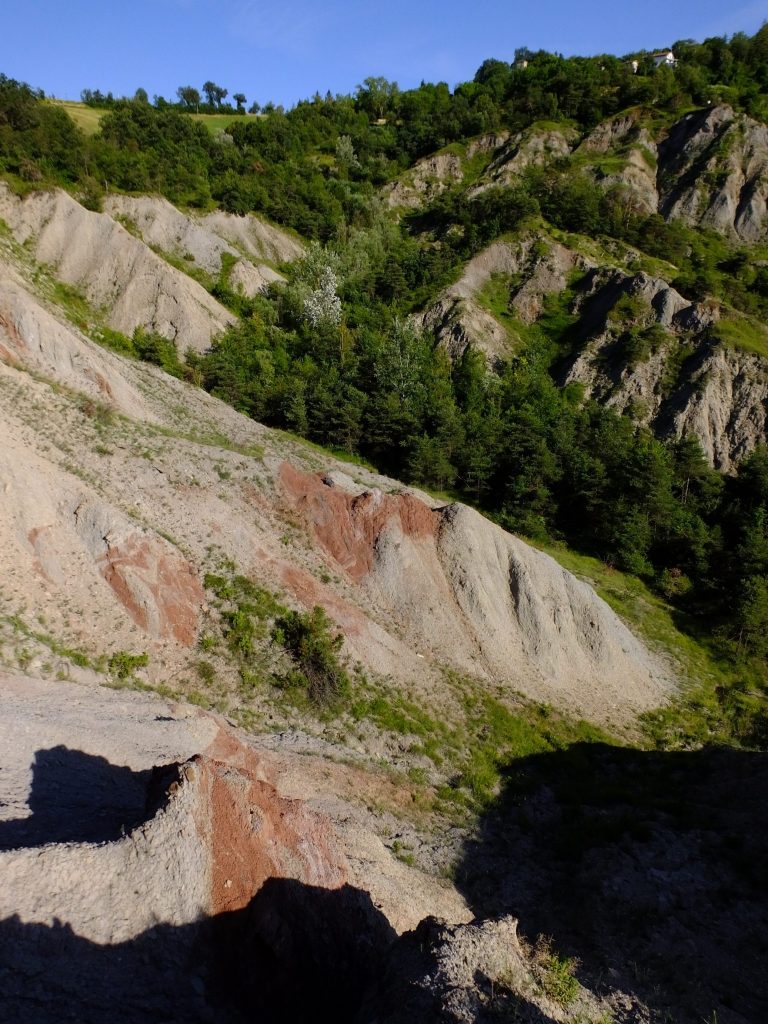 Vast municipal areas are characterised by extensive badland formations featuring polychrome clays, thus giving rise to outstanding unique landscapes with large multi-coloured ravines: some of them have been identified as important geological sites, given their great scientific relevance.

A few remarkable and spectacular gullies located in the Baiso territory have been classified as sites of geological interest by Emilia Romagna: the Casale (Figure 5) and Mélange di Baiso geological sites (named Geosites of the Emilia-Romagna Region, see https://geo.regione.emilia-romagna.it/schede/geositi/ ). 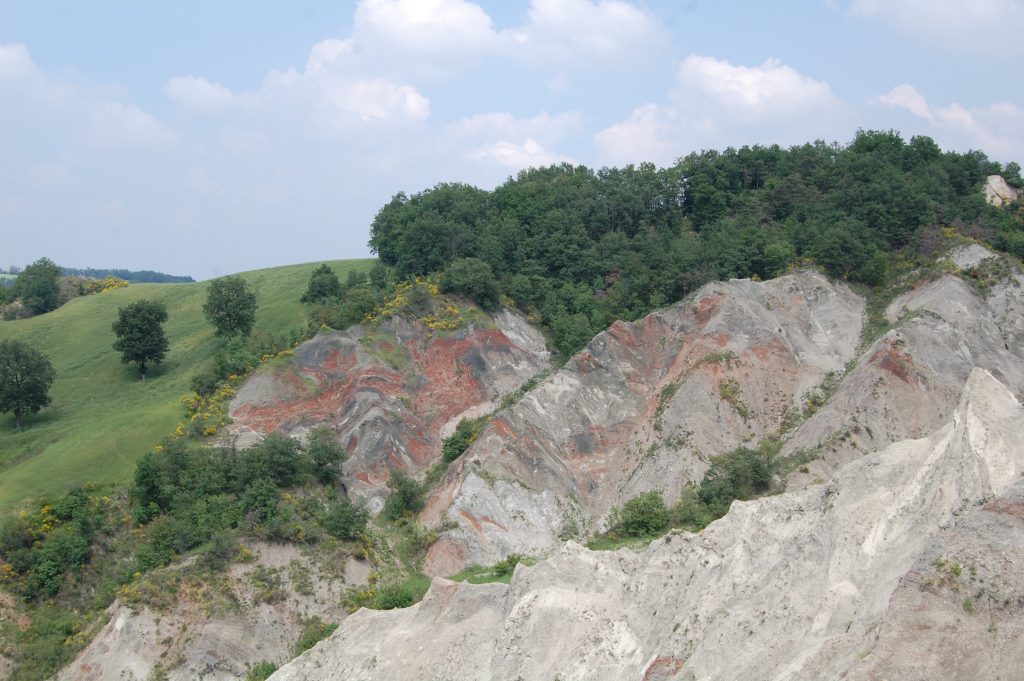 The varicoloured clays are also interesting from the mineralogical point of view: the formation and development of minerals such as pyrite, marcasite, barite, calcite and pyrolusite occurred in very deep basins below the carbonate compensation limit, in a reducing environment featuring the presence of organic material.

The Apennine diagenetic mineral genesis is closely linked to the Apennine orogenesis. Ion-rich fluids, such as iron and barium, were first adsorbed by clays during the diagenetic processes, thus giving rise to gemination nuclei, in a completely buried environment, at the interface between permeable lithologies (sandstones) and waterproof (clays) when the sedimented, not completely lithified material was subjected to severe tectonic stress.

Iron sulphide minerals are found in the Baiso territory, featuring both polymorphic pyrite and marcasite phases, although pyrite formations are more prevalent. Pyrite is often found in aggregates on the surface of lithic fragments of sedimentary nature (such as sandstone or limestone) present in the clay formation. More recent pyrite features more or less clear shades of a bright brass yellow color; much more frequently, pyrite turns reddish, brown or almost black. In the most frequent cases cube-octahedron shaped pyrite formations can be observed, featuring often curved, saddle-shaped faces, with the presence of geminates and aggregates. Marcasite (Figure 6) features a slightly lighter shade of yellow than pyrite; if freshly fractured, it can be found in small-sized pinacoidal prismatic polygeminate aggregates (up to 3–4 mm). Spherical nodules covered with rhombic-pyramidal or cubic and octahedral terminations occur in the Helminthoid flysch (Scachetti et al., 2015). 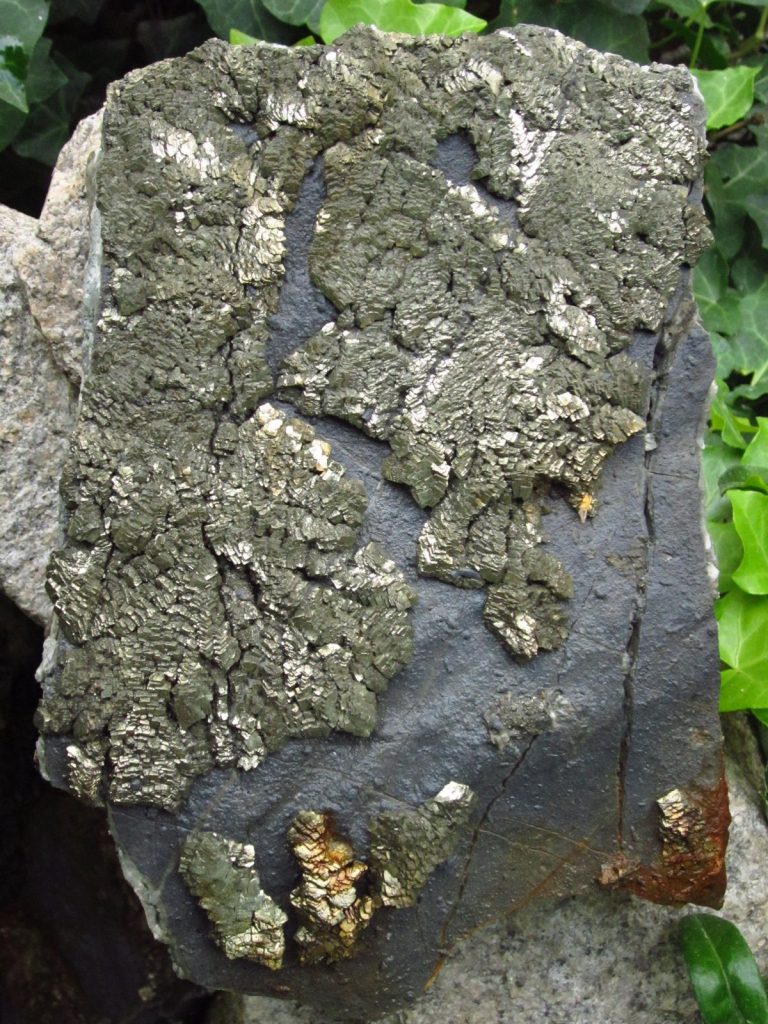 The so-called Liguride and Epiliguride paleontological outcrops can be found in the territory, with a broader and more relevant presence of Liguride outcrops: these are the direct testimony of a vanished ocean during the Cretaceous era (145 to 66 million years ago), spread over an area roughly corresponding to the current Liguria region and the Ligurian Sea.

The paleontological study of these sediments is made difficult by the complex and troubled history of the Apennine orogenesis, as previously described, and by the deposition paleoenvironment, which was presumably buried for a long time at an extreme depth, below the carbonate compensation limit, i.e. the depth beyond which first aragonite and then calcite tend to dissolve. Under these conditions, the preservation capacity of tiny marine organism shells, which are normally used for biostratigraphic dating of rocks (planktonic foraminifera and calcareous nanoplankton) is extremely low: it is in fact almost impossible to find microfossils useful for dating purposes, except in limited cases.

Hence, the discovery of a Pliosaurus tooth (Figure 7) in the Baiso territory should be considered of great scientific relevance, especially if combined with the discovery of calcareous nanofossils, which made it possible to determine with good accuracy the age of the artefact: Turonian (dating from 93.9 to 89.8 Ma), consistent with the finding in the Scabiazza sandstones (Papazzoni CA, 2003).

This geological framework has given rise to the industrial specificity of the area within ​​the Municipality of Baiso, which over the past few decades has become a very important area for the clay supply for the Sassuolo and Casalgrande ceramic district (Reggio Emilia Province mining plan). The importance and evolution over the centuries of the ceramic clay pits within the Reggio Apennines territory led to the economic boom of the district during the 1960s, when raw material for the ceramic tile production began to be sourced locally, mainly within the Carpineti, Baiso and Castellarano municipal areas. The mining industry, which produced locally relevant morphological changes still visible today, also led to the economic and social development of the so-called “Ceramicland”, i.e. a key international benchmark for ceramic tile manufacturing.

A further highlight of the local economy of Baiso that results in an anthropic landscape is tied to mixed-grass fodder meadows surrounded by linear hedges. The localised presence of rural farming settlements, sometimes characterised by buildings of historical and cultural interest, marks the landscape, as in the case of tower houses (Figure 8) found in the hamlets of Colombaia and Fontanella (Cervi, 1982,2009). 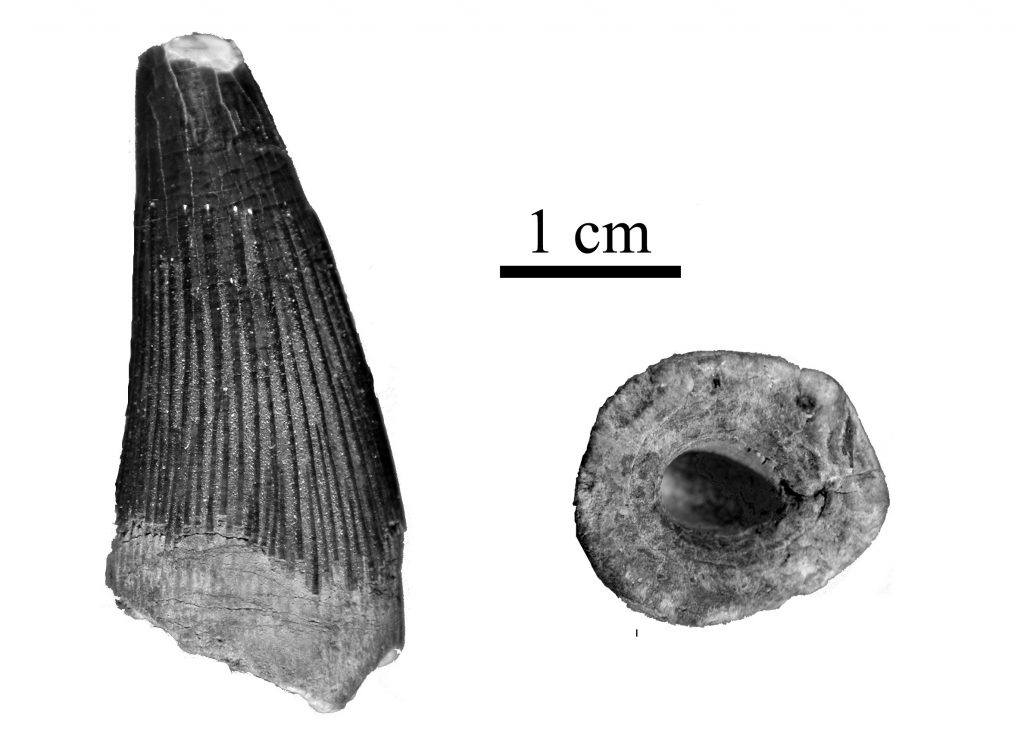 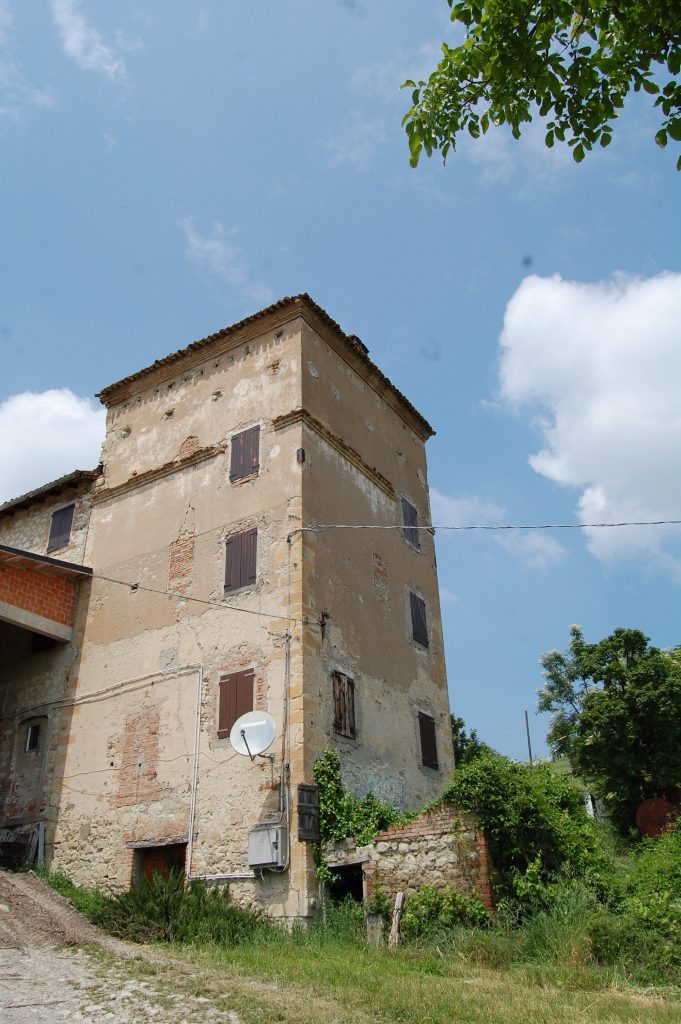 Vegetation of the area

The vegetation structure that characterizes the study area lies within the framework of sub-mountainous oak forests, typical of the median Emilian Apennine belt. The presence of ​​vast clay-rich surfaces belonging to the geological Mesozoic Clays series of the Northern Po Valley Apennine has led to considerable specific grassland variations as opposed to the usual flora characterising sub-mountainous oak forests.

With the exclusion of ravines, which due to their strong dynamics do not allow any grass formation, the other clayey soils have allowed the growth of a suitable layer of topsoil, resulting in the formation of the oak forests, which, according to their edaphic characters and exposure slopes, are characterised as either mesophile or acidophile oak forests. The oak forest formation prevalent in the area is mainly constituted by groupings of downy oak (Quercus pubescens) associated with flowering ash (Fraxinus ornus), juniper, blackthorn, hawthorn and firethorn.

The vegetation of the study area is also locally characterised by the presence of extensive populations of Scots pine (Pinus Sylvestris), which shows good vegetative vigour and tends to concentrate mainly at lower altitudes along the valleys, sometimes giving rise to almost pure Scots pine forests. Scots pines are also present, although to a much lesser extent, in very localised nuclei within sub-mountainous oak forests.

The mining paths of Baiso clays

The multidisciplinary study “The mining paths of Baiso clays” (Cervi et al., 2018) was carried out in this environmental context. It aims to identify an innovative strategy to transform the areas affected by mining activities into an opportunity for environmental regeneration and in-depth geological and geoheritage knowledge. It begins by analysing and describing the strengths ​​and weaknesses of this environment. In fact, the study has shown that on one hand all of the abandoned mining areas can be a weakness of this territory, being considered unattractive by tourists. However, from a landscape point of view, they are often well contextualised and sometimes no longer identifiable: the presence of slopes reshaped by runoff gives rise to the outstanding gullies now typical of the Apennine landscape. 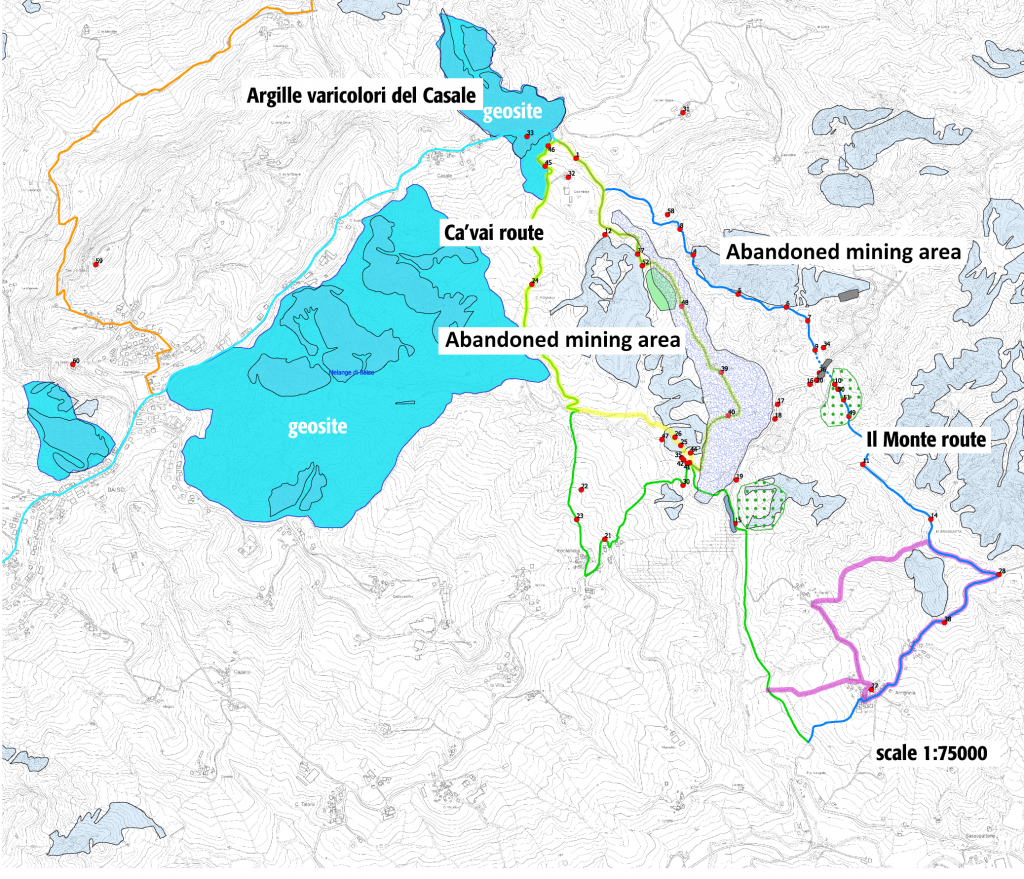 The great natural and scenic interest of this area within the municipality of Baiso were confirmed by the classification of Argille Varicolori del Casale (the Multi-coloured Clays of Casale) and ravines within the sites of geological interest of the Emilia-Romagna region and within the UNESCO MAB (Man and the Biosphere) area. This led to the drafting of a social and environmental enhancement proposal, i.e. a landscape project intended as a tourism-nature-education development project of the territory under question, based on its geological, geomorphological, paleontological, botanical and historical features.

The European network of minor routes (i.e. local paths and existing trails) crossing all the territory under study is the main tool enabling the enhancement of environmental peculiarities related even to derelict mining areas. To this end, six main routes have been identified, easily accessible to everyone, leading to the main geological, geomorphological, landscape and natural highlights, described in special cards providing information on the natural and man-made history of the sites.

The Ca’ Vai Route (Figure 9, yellow) is the most significant path from the geological point of view: it allows visitors to fully appreciate the geological characteristics of the Giorgella River Basin, with reference also to the quarries that were located there. The 4.1 km trail starts from the hamlet of Casale and by following the local northbound path visitors will soon reach the watershed that overlooks the breathtaking scenery of the Baiso geological site of polychrome clays, among the most significant geological sites nationwide. This stretch offers several interesting botanical and geological landscape highlights, including the stunning view of the Giorgella River gully, featuring its characteristic outstanding sequence of erosive forms of grey and polychrome clays. The unmistakable sandstone spire of Mount Valestra, a true landmark, stands out in the background.

The two sites are connected by secondary roads (Figure 9), thus making the various spatial contexts accessible also by means of shuttle buses. These routes are also valuable for local development and tourism purposes. They will be equipped with tourist signs providing a description of the highlights of the places to be visited, characterised by a stunning view, allowing visitors to fully grasp the key aspects of the Baiso mining, cultural and historical landscape.

In conclusion, the study allowed us to describe and map the key landscape, environmental and geological futures of the territory of Baiso, identifying a network of paths enhancing the landmarks of the area. The study thus provides the basis for the creation of a new Mining Park of Baiso clays, which is under consideration for inclusion in the UNESCO MAB area and in Protected Landscape of the hills of Reggio Emilia and the Lands of Matilde di Canossa.