Are the pan-European seas a promising source for critical metals supply? The project GeoERA-MINDeSEA

Covering 15,000,000 km2, the pan-European seas represent a promising new frontier for the exploration of mineral resources and an enormous challenge in terms of research, technological innovation, environmental protection, spatial planning and social acceptance. The GeoERA-MINDeSEA project is an ERA-NET action (Horizon 2020) a transnational cooperative network of 12 geological surveys and marine institutes for investigation and exploration of seafloor mineral deposits in pan-European seas. MINDeSEA is producing cartography, datasets, genetic models and case studies to help the EC, stakeholders and society assess possibilities. These are based on detailed studies and compiled data on geology, geochemistry, mineralogy, and environmental and regulatory issues. Strategic and critical metals are being investigated in several seabed mineral deposits, looking for alternative sources to land-based mined deposits. MINDeSEA’s task is to identify areas for sustainable resourcing and information to support decision-making on management and marine spatial planning in pan-European seas as part of its core activities.

A major element in Europe’s long-term economic strategy is to ensure security of supply for strategic and critical metals as part of the Blue Growth Strategy, developing sectors that have a high potential for the creation of sustainable jobs and growth as seabed mining. Marine aggregates mining (sand and gravel) is one example of a long established activity in Europe (e.g., Germany, the United Kingdom, Belgium and the Netherlands) and represents more than 1900 deposits with 834 licenses for either exploration or extraction (European Commission, 2019a).

Covering more than 70% of the planet, seas and oceans represent a promising new frontier for the exploration and exploitation of mineral resources. Deep-sea deposits span a large diversity of environments and resource types, from hydrothermal deposits to crusts and nodules, and are particularly attractive for their polymetallic nature with high contents of rare and critical metals. Moreover, shallow-water resources such as marine placer deposits represent another source of many industrial materials, critical metals, and gems. The seabed mineral resources host the largest reserves on Earth for some metals like cobalt, tellurium, manganese, and the rare earth elements (Hein et al., 2013), critical for industry  and required for a transition from a carbon-based to green-energy-based world (Sovacool et al., 2020) (Figure 1). The EC’s Blue Growth strategy estimated that “By 2030, 10% of the world’s minerals, including the sources for cobalt, copper and zinc could come from the ocean floor. Global annual turnover of deep sea mining can be expected to grow from virtually nothing to €10 billion by 2030” (page 10, section 5.4, European Commission, 2012). In addition, materials from recycling seabed mining related wastes, like silica coming from ferromanganese deposit exploitation and processing, will contribute to the circular economy. 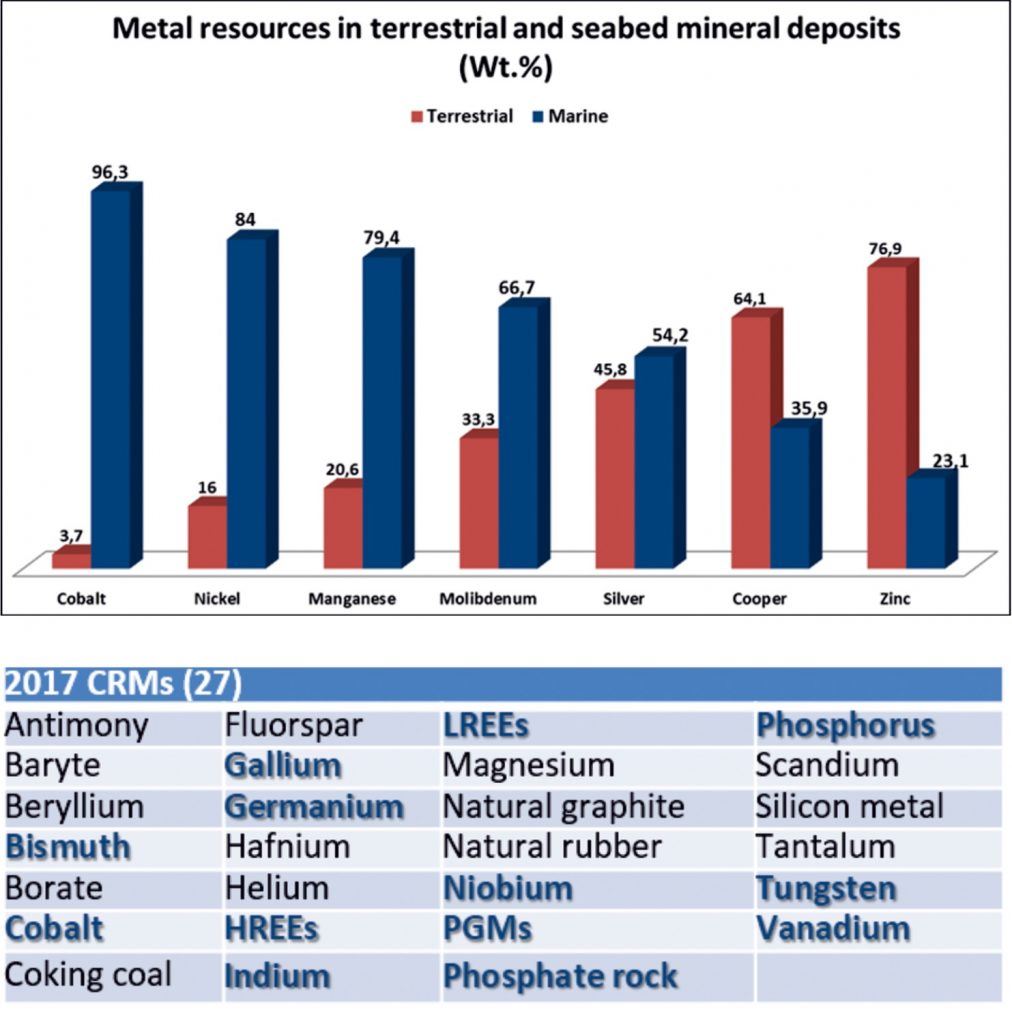 Figure 1: Above: comparison between the terrestrial and marine resources for critical and strategic metals. Below: the European Commission 2017 CRM list with metals enriched in the marine deposits marked in blue.

The global ocean can play a key role in the mitigation of climate change, but also in improving the sustainable use of mineral resources. These issues include judicious consideration among the fisheries and minerals industries, offshore wind production, and the preservation of aquatic environments and ecosystems in line with the UN Sustainable Development Goals (United Nations, 2020). Extracting minerals from the deep sea represents an enormous scientific and technological challenge for humankind, and one of the biggest challenges is to ensure the protection of the marine environment and its ecosystems.

Considerable improvement in our knowledge of the oceans and seas is necessary to develop a sustainable “Blue Economy” and in obtaining social license. But seabed geology and ecosystems are widely unexplored, and new geological and environmental studies are required to address the impacts of potential mining activities. New developments focused on new technologies for deep-sea exploration and mining will be required. In addition, a regulatory framework for minerals extraction and marine spatial planning is needed for the development of the seabed mining sector.

The International Seabed Authority (ISA) is working on exploitation regulations that will permit the extraction of minerals in areas beyond national jurisdictions, the so-called “Area” (Figure 2). Thirty contractors have entered into 15-year contracts with ISA for exploration for polymetallic nodules, polymetallic sulphides, and cobalt-rich ferromanganese crusts on the deep seabed of the Atlantic, Pacific, and Indian Oceans (ISA, 2020). Over the 15 years these exploration areas will be subject of relinquishment and will be smaller by the end of the contract (not more than 2500 km2 in the case of polymetallic sulphides and not more than 1000 km2 in the case of cobalt-rich ferromanganese crusts).

Recently, EU research programmes are funding projects to increase knowledge about seabed minerals in its waters, marine minerals exploration, extraction technologies, and environmental issues. One EU programme, GeoERA (“Establishing the European Geological Surveys Research Area to deliver a Geological Service for Europe”) – an ERA-NET action under Horizon 2020 – funds transnational projects contributing to the best use and management of the subsurface (Gessel et al., 2018). One GeoERA-funded project is MINDeSEA. 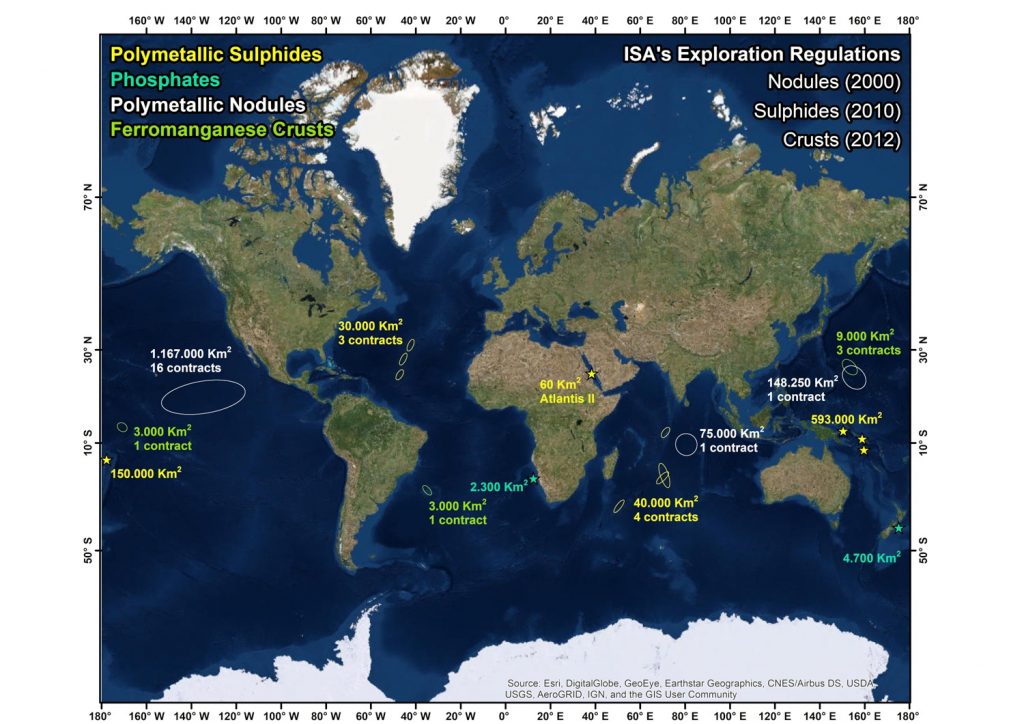 Eight GeoERA partners and four non-funded organisations with a common interest in exploration and investigation on seafloor mineral deposits have collaborated in the project GeoERA-MINDeSEA.  The geological survey organisations of Spain, Germany, Greece, Ireland, Norway, Portugal, Sweden and Ukraine handle coastal, marine geological investigation and mineral resources studies and mapping in their respective countries. The non-funded participants – the Instituto Português do Mar e da Atmosfera; the United States Geological Survey; the All-Russia Scientific Research Institute for Geology and Mineral Resources of the Ocean; and the Geosciences Institute from Spain – maintain important databases and host internationally-known experts on seafloor mineralisation and hydrothermal systems.

The project focuses on an integrative metallogenetic study of the principal types of marine mineral resources (polymetallic sulphides, ferromanganese crusts, phosphorites, marine placers and polymetallic nodules) in the seabed under the jurisdiction of European coastal States (Figure 3). The geographical scope of the project includes all the regional basins around Europe comprising the Atlantic and Arctic Oceans, the Mediterranean Sea, the Baltic Sea and the Black Sea.

The MINDeSEA project is compiling data and genetic models for all of these deposit types based on extensive studies carried out previously, which include geophysical surveys, sampling stations, underwater photography and ROV surveys, and mineralogical, geochemical and isotopic studies. It builds on previously and currently developed pan-European and national databases and expands strategic and CRM knowledge through compiling mineral potential and metallogenic studies of CRW resources in pan-European seas.

Seabed mineral deposits in the pan-European seas: an update

The pan-European seas cover about 15 million km2 in the Arctic and Atlantic oceans and the Mediterranean, Baltic, and Black Seas, from shallow waters up to 6,000 m water depth. The preliminary MINDeSEA results show the potential of the pan-European seas for critical metals according to the criticality list of the European Commission (2017) (Figure 3) and the enormous gaps of information covering vast marine areas. More than 600 mineral occurrences and 1,045 individual analysed samples are reported in the MINDeSEA database. The dataset contains five principal levels of information with multiple attributes for each occurrence: geographical, metallogenic, economic, geochemical and environmental data. A reference database supports the mineral occurrences with more than 200 records, including peer- reviewed papers, oceanographic expedition reports, PhD theses, maps and datasets.

In December 2018 MINDeSEA produced the first pan-European compilation map of “energy-critical elements” based on ferromanganese deposits (González et al., 2018). The map reports occurrences and deposits for cobalt and lithium and can be downloaded at https://geoera.eu/projects/mindesea2/. This map and other MINDeSEA products were included in the 2019 EU Blue Economy Report (European Commission, 2019a) and will be updated with new data in the upcoming 2020 Report (Figure 4). 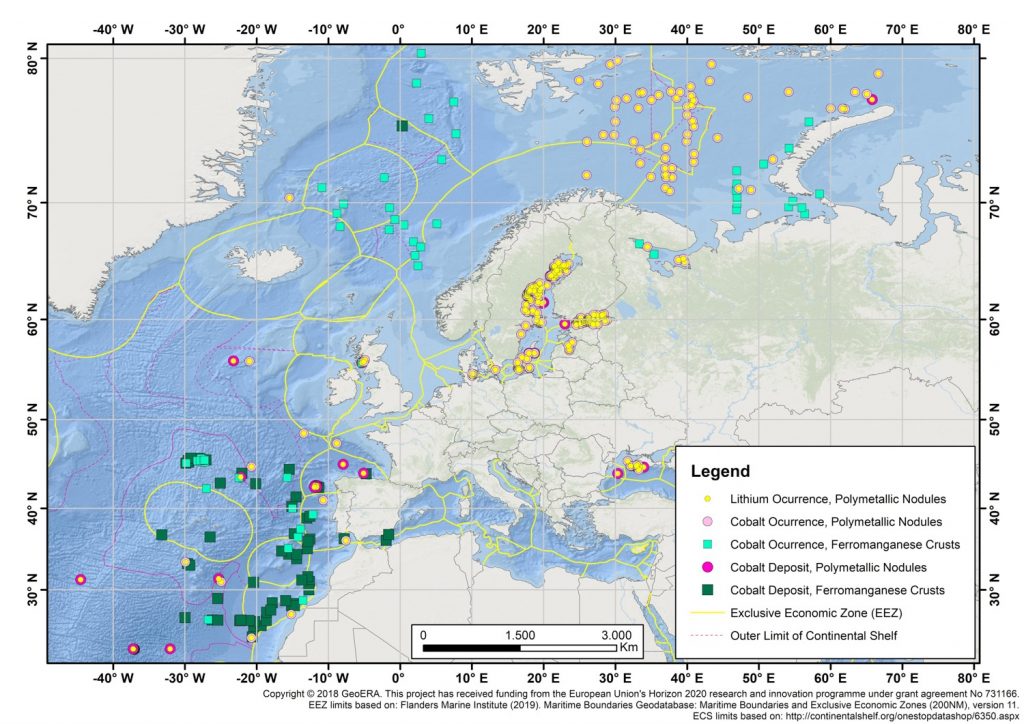 Figure 4: MINDeSEA pan-European map of energy-critical metals cobalt and lithium based on ferromanganese occurrences and deposits of nodules and crusts. Occurrences refer to Li2O average content <660 g/t, potential resources <5,000 Mt, and Co average content <500 g/t. No up-to-date information is given about resource potential.

This work has been supported by the European Union’s Horizon 2020 research and innovation programme, GeoERA (Grant Agreement Nº 731166, project GeoE.171.001). We thank Pedro Madureira, Antje Wittenberg and editors for comments that helped improve this paper.

Read here
We use cookies on our website to give you the most relevant experience by remembering your preferences and repeat visits. By clicking “Accept All”, you consent to the use of ALL the cookies. However, you may visit "Cookie Settings" to provide a controlled consent.
Cookie SettingsAccept All
Manage consent