The well-stratified Oligo-Miocene carbonates along the western coast of Gozo Island include four exceptionally large sinkholes (300 to 400 m diameter), smaller sinkholes and natural arches, clustered within the 1 km-wide Dwejra Depression. The dipping limestone along the rims of the sinkholes, dissected by faults, shows cyclic sedimentation reflecting palaeoclimatic changes. Joints have been eroded to produce natural sea arches, including the iconic Azure Window (which collapsed in 2017). The structural depression and sinkholes are linked to dissolution of subsurface evaporites. The dramatic landscape comprising exceptional carbonate outcrops along cliffs, natural arches and circular pools and coves formed by the flooded sinkholes in western Gozo are a testament to past climatic change and catastrophic events pertaining to the Earth’s geological heritage.

Sinkholes are widely distributed on the Earth’s surface, especially where subsurface voids are prone to develop. Giant sinkholes measuring hundreds of metres in diameter are less common and form enigmatic features. Over 50 sinkholes with a diameter >40 m are recorded in the Maltese Islands in the Central Mediterranean Sea (Figure 1A). An exceptional cluster of large sinkholes are located along Western Gozo Island where they form a spectacular landscape. The area is a Natura 2000 site and is tentatively being considered as a candidate UNESCO World Heritage Site.  Four giant sinkholes dominate the landscape and coastline (sinkhole diameter in brackets): Dwejra (400 m) and Berwin (300 m) sinkholes, which have their base entirely flooded by the sea, Qawra Sinkhole (300 m), infilled with Blue Clay and Quaternary sediments  and partly flooded, and a remnant of the here named, Maxwell Sinkhole (150 m) (Figure 1B). The sinkholes are nested in a larger structural depression, here named the Dwejra Depression. Although the base of the sinkholes is <100 m, which is less than that of deeper sinkholes (>240 m deep) in the European continent, e.g., Hranice Abyss (Czechia), Red Lake (Croatia), and Pozzo del Merro (Italy), their size, and their clustering within about 1 km2, makes the sinkholes in western Gozo exceptional at the European level.

Discontinuities and differential marine erosion of the carbonate stratigraphy produced natural arches in Dwejra and Qawra sinkholes. A stack called Fungus Rock is what remains of collapsed arches. The most recent arch collapse was that of the spectacular Azure Window in March 2017, which was a background to epic fantasy films. 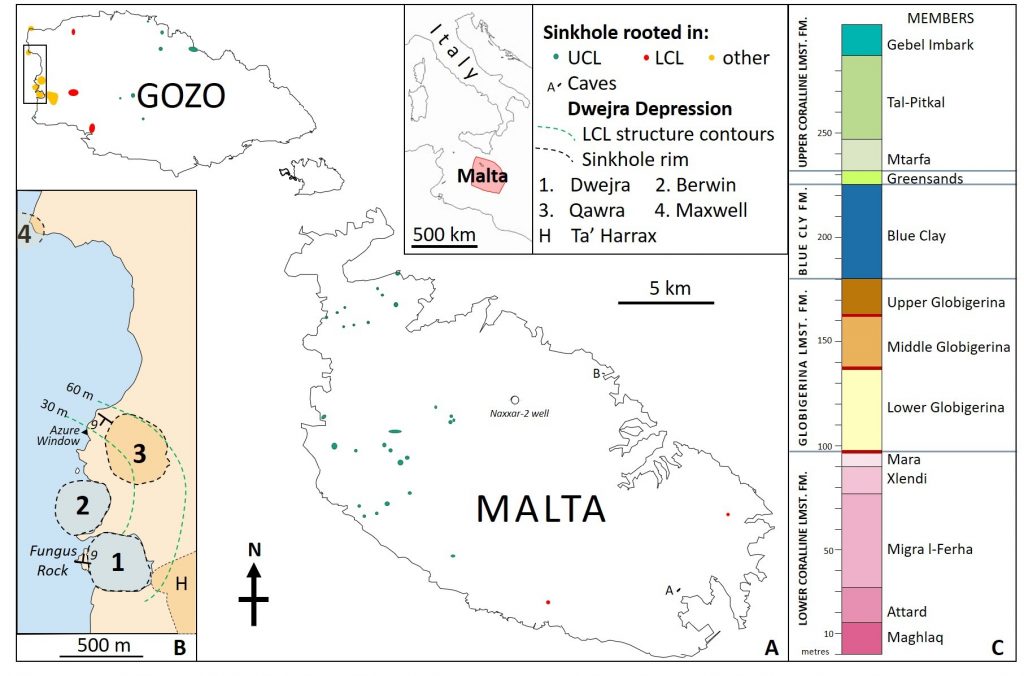 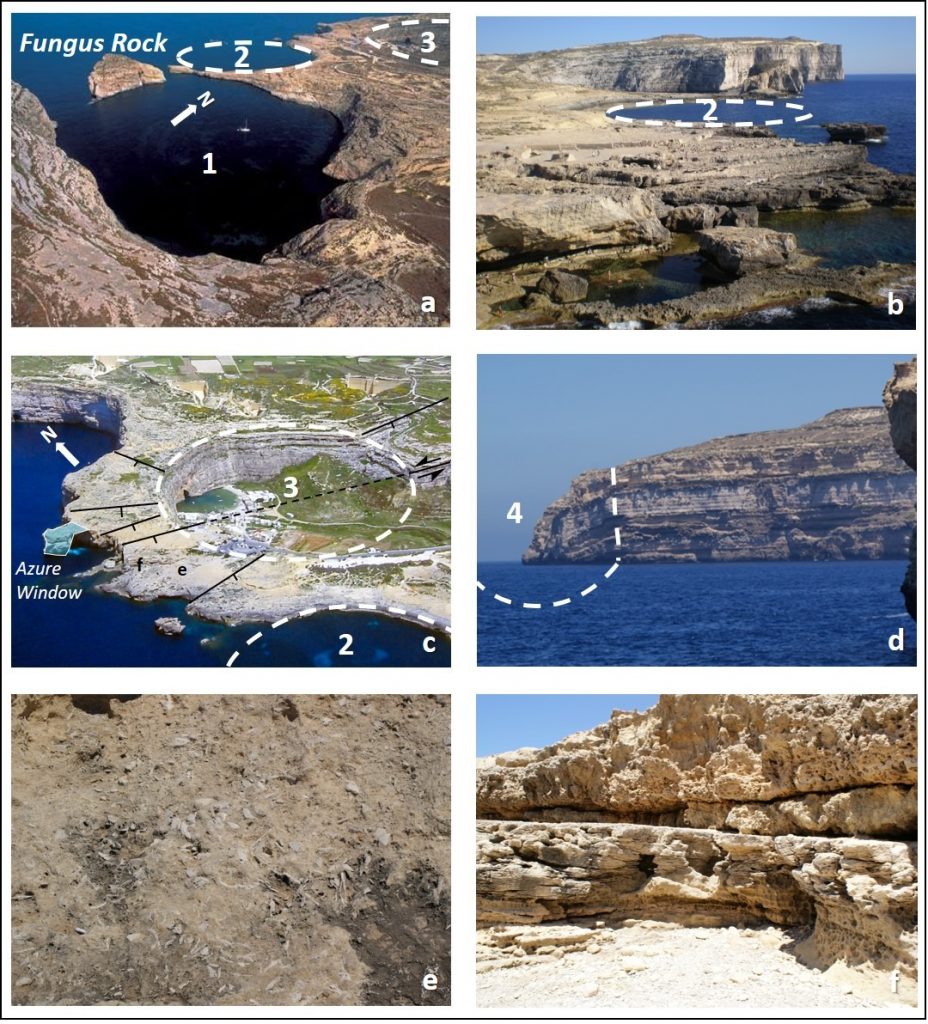 The Maltese Islands are the emergent parts of the >200 km-wide isolated Malta Carbonate Platform (Figure 1A) that aggraded >8 km of mostly carbonates since the early Mesozoic over the subsiding North African passive margin (Gatt & Gluyas, 2012).  The Islands consist of five Oligo-Miocene formations (Figure 1C); the topmost Upper Coralline Limestone Formation (UCL) and the basal Lower Coralline Limestone Formation (LCL) consist of shallow marine carbonate sediments, with the latter extending to below sea-level, reaching a formation thickness that ranges from 200 to <400 m (Gatt, 2012).  The range in thickness reflects the shallowing of the carbonate platform towards western Gozo (Pedley & Bennett, 1985), which is the result of antecedent Eocene bathymetry. 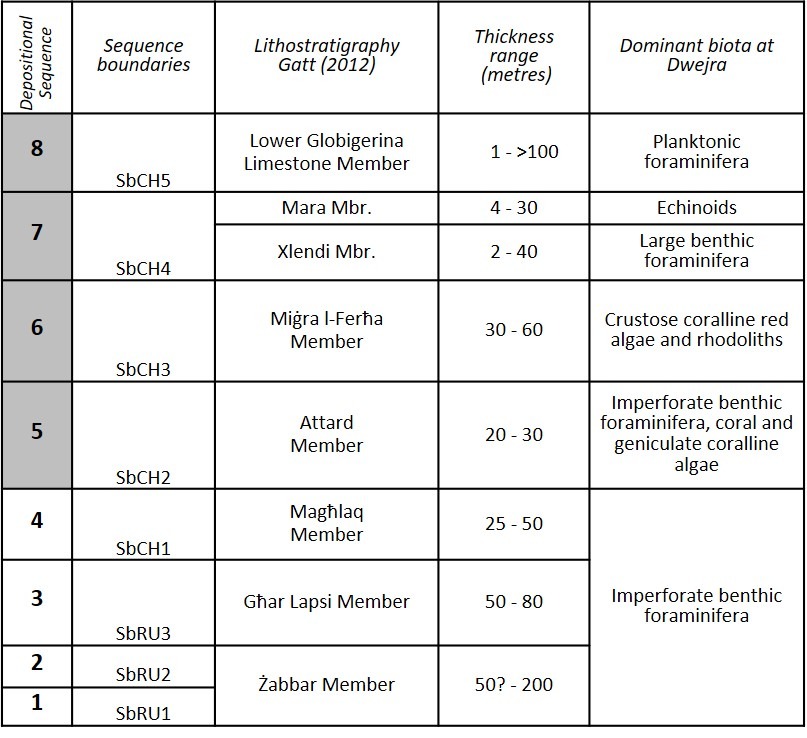 Bedding is generally horizontal along the cliffed coastline of Gozo, except along the rim of the sinkholes in western Gozo.  Structure contours of the top Lower Coralline Limestone confirm that a structural low is centred over Berwin Sinkhole (Figure 1B and 2b). Faults in the structural low are oblique to the regional normal and strike-dip faults which trend east-west. Normal faults along the rim of the Qawra Sinkhole step down into the structural low (Figure 2c), with antithetic faults developing in response to surficial extension (Figure 3c). The bedding dips 9° towards the southwest (Figure 4), whereas the bedding at Fungus Rock, a remnant of the western rim of the Dwejra Sinkhole, dips 9° north.

The structural low, here named the Dwejra Depression, developed by subsidence that produced surface extension.  The depression is 1 km wide, although its axial length is mostly submerged and may extend to Maxwell Sinkhole and to ta’ Harrax, east of Dwejra Sinkhole. The Dwejra Depression suggests the development of a large subsurface chamber with a roof span of hundreds of metres. The gradual subsidence of the cavern roof produced the structural depression with concomitant concentric faulting preserved along the rim of the Qawra Sinkhole (Figure 2c).  At a later stage, large parts of the cavern roof collapsed, producing the large vertical sinkholes that cut into the dipping limestone of the structural depression. The upward void migration produced a considerable volume of breccia. Volume increase by bulking as well as the surface subsidence of tens of metres had to be compensated by the spread of breccia into the intact part of the subsurface cavern.

The faults and vertical joints along the coast were susceptible to differential marine erosion, creating several natural arches in the Dwejra Depression, e.g., Azure Window and arches in Fungus Rock and Qawra Sinkhole. The growth and eventual collapse of these arches became the main process of the erosion of the rim of the sinkholes, sometimes leaving stacks behind, as in the case of Fungus Rock in the Dwejra Sinkhole, or complete collapse, as in the case of the Azure Window.

Figure 4: Dipping beds and faults along the Qawra Sinkhole western rim and natural arch that allowed partial flooding of the sinkhole. Red lines mark sequence boundaries between sequences 6 to 8. Inset shows Azure Window prior to its collapse in March 2017.

Circular collapse structures related to carbonate or evaporite dissolution have been widely reported in the Mediterranean. Most of the sinkholes in the Maltese Islands are karst features created by carbonate dissolution along major joints, rooted in the horizontally-bedded Upper and Lower Coralline Limestone formations. The two limestone formations have enough compressive and tensile strength to support large caverns. The accessible, larger intact cave systems in Malta (Figure 1A) are also found in these two formations and are characterised by narrow (<30 m) and long (<150 m) geometry controlled by jointing. When the caverns reach a critical size between 40 to <250 m-wide as a result of carbonate dissolution, the cavern roof collapses, forming a sinkhole.

Western Gozo was a bathymetric high of the Malta Carbonate Platform during the Miocene, when it was subject to erosion by strong currents (Pedley & Bennett, 1985). During the Palaeogene, the same area experienced episodes of subaerial exposure. The base of the LCL coincides with the Oligocene-Eocene boundary which correlates to evaporites that were widespread in North Africa and produced during regional arid climatic conditions (Gerdes et al., 2010). The Maltese well data supports deposition of extensive evaporites at this level as evidenced by brecciated limestone from collapsed caverns and anhydrite in Naxxar and Aqualta wells. Western Gozo may have experienced sabkha-type of environments during Late Eocene subaerial episodes which could have produced several tens of metres of evaporites.

The density and size of the sinkholes in western Gozo suggest the dissolution of top Eocene evaporites underlying the circa 200 m-thick Lower Coralline Limestone Formation, as the single underlying process for the formation of the Dwejra Depression. Evaporite salt beds are prone to dissolution by infiltration of undersaturated water, especially during prolonged sea-level drawdowns, as happened during the Messinian salinity crisis.

The cavern roof collapses when it reaches a critical thickness (t) and the cavern reaches a critical width (w). Studies on sinkholes found that the stability of caverns generally followed the relationship t = 0.7 w (Waltham et al., 2005). Based on this relationship, the 300-metre-wide Qawra Sinkhole would have collapsed when the cavern roof thickness beneath it diminished to circa <200 m, which is the entire thickness of the Lower Coralline Limestone Formation.

A three-stage development of the Dwejra Depression through time is proposed (Figure 5): 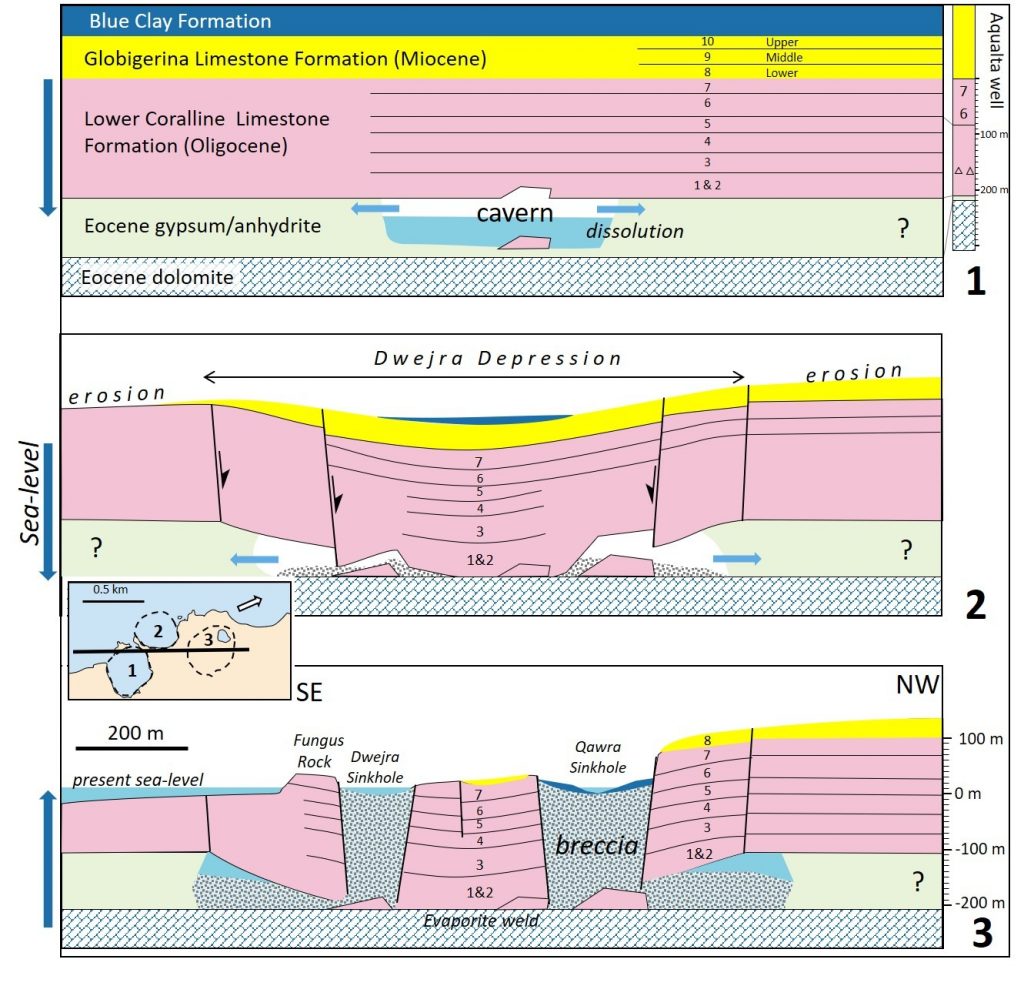 The seven depositional sequences of the Lower Coralline Limestone Formation are interpreted as having formed during third-order sea-level cycles of circa 1.2 Ma duration, controlled by the waning and waxing of the Antarctic ice sheet, when the Earth had a unipolar ice-sheet. The changes in biota and level of micrite up the succession are interpreted as suggesting shallow marine to restricted conditions during depositional sequences 4 and 5, when oligotrophic sea conditions stimulated high carbonate production. Depositional sequence 6 suggests deeper, moderate energy, open marine and mesotrophic conditions. The sequence abruptly changes along SbCH4 to shallow, high energy, open marine deposits in the lower part of depositional sequence 7. Further up, sea-level deepened. The lithological changes are interpreted as resulting from meridional climatic shifts in North Africa which was relatively dry during depositional sequences 4, 5 and 7, but became more humid during the depositional sequences 6 and 8, resulting in greater continental fluvial discharge of nutrients into the Neotethys, creating a mesotrophic sea where coralline red algae (Migra l-Ferha Member) could thrive (Gatt & Gluyas, 2012). Eventually, the carbonate platform was drowned during eutrophic marine conditions that deposited sporadic phosphates, and later draped with pelagic sediment of the Globigerina Limestone Formation (Gatt et al., 2009).