The study area is located in the western part of the continental rift zone of the Gediz within the Menderes Massif in western Anatolia and consists of Paleozoic schists, intercalation of carbonate schists, mica schists and phyllites and marbles, Mesozoic carbonate rocks and ophiolites, and Cenozoic sediments such as travertine and alluvium. The impermeable mica schists form the basement rocks in the area hydrogeologically. The Paleozoic marbles form a reservoir for geothermal waters and aquifer for groundwaters especially. The Pliocene to recent rocks play an important role as impermeable cap rocks for the formation of geothermal waters. The geothermal waters in Urganlı, with surface temperatures of 75 °C and reservoir temperatures of 180 °C, can be considered as Na-HCO3 type geothermal waters rather than Ca-Mg-HCO3 type groundwaters. In the area, the geothermal waters were modelled hydrogeologically. The Kula volcano located in the rift zone of Gediz within the Menderes Massif, with a last eruption age up to 18,000 years, might be considered as a heat source for the formation of geothermal waters in the study area.

Between the Eurasian and African plates, the tectonic position of the eastern Mediterranean area is controlled by the situation of the Anatolian and Aegean microplates. This plate tectonic development results in the lifting of the Menderes Massif due to compressional tectonic features. From the Tortonian to Pleistocene, the continental rift zones of the Büyük Menderes, the Küçük Menderes and the Gediz in the Menderes Massif were formed because of the extensional tectonic features, which are represented by a great number of geothermal waters (Figure 1). We have selected the geothermal field of Urganlı, located in the western part of the continental rift zone of the Gediz in the northern part of the Menderes Massif (Figure 1). The aim of this paper is (i) to update geological map of geothermal fields of Urganlı and environs, (ii) to describe water-rock interaction by using mineralogical, petrographical and geochemical methods, (iii) to expose genesis and development of the geothermal waters by hydrogeological, hydrogeochemical and isotope geochemical methods and (iv) to hydrogeologically model geothermal waters in combination of water-rock interaction. 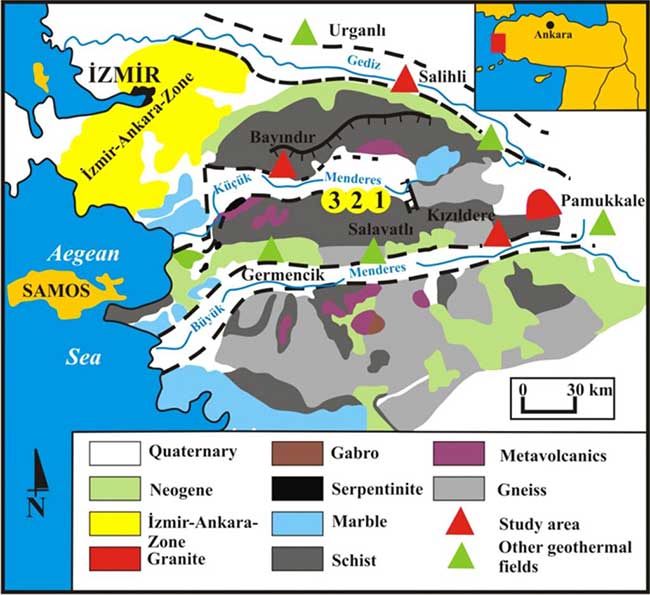 Figure 1: Geological map of the Menderes Massif and  the location of the study area of Urganlı. 1: Mercury deposit of Haliköy, 2: Antimony deposit of Emirli, 3: Arsenopyrite and gold deposit of Küre (Özgür, 1998).

In Urganlı and environs, the Paleozoic metamorphic rocks form the basement consisting of calcschists, micaschists, quartzschists, quartz-muskovite schsits and quartz-muskovite-biotite schicts (Figures 2 and 3). In the study area, beige and brown coloured intercalations of marbles occur in the eastern part of Sarnıç Tepe. In the N and E of the study area, Paleozoic marbles overlie the metamorphic rocks. Marbles are dolomitic in some cases; and they show a dark grey colour at the bottom and are light grey and moderate to bulky crystallised at the top (Vural, 2009; Büyükşahin, 2017). The Paleozoic metamorphic rocks are overlain by Mesozoic limestones, dolomitic limestones and allochthonous ophiolites located in the NW part of the study area (Figure 4). The limestones are more dolomitic in composition at the bottom. Dolomites contain secondary calcite fillings and do not show distinct layering. The Paleozoic and Mesozoic rocks in the area are overlain by Pliocene sediments and Quaternary travertine, alluvium and talus deposits discordantly. At the bottom of Pliocene deposits, there are conglomerates, sandstones, siltstones and claystones overlain by clayey limestones and claystones concordantly. Detritic sediments such as conglomerates, sandstones, siltstones and claystones are widespread in the study area. In general, conglomerates rounded from moderate to coarse are adhered by carbonates and clay cements loosely. Sandstones in grey and greenish grey colours are intercalated with fine layered claystones and siltstones here and there. In the study area, the Quaternary travertine deposits and alluvium form the youngest rock formations. 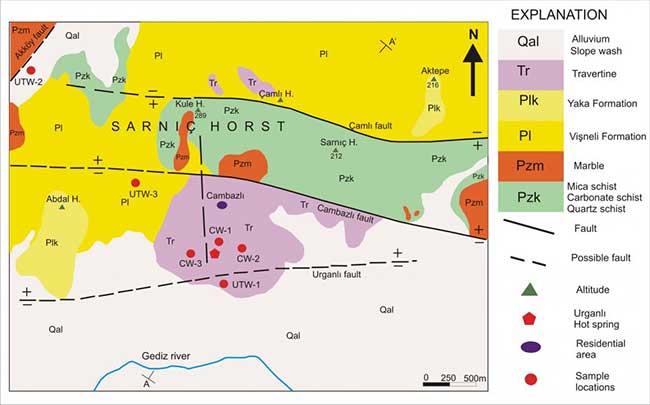 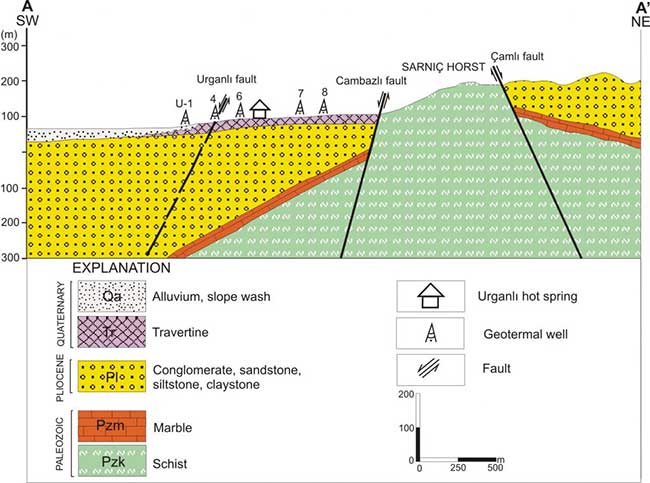 Figure 3: Geological cross-section of the study area of Urganlı (modified from Büyükşahin, 2016). 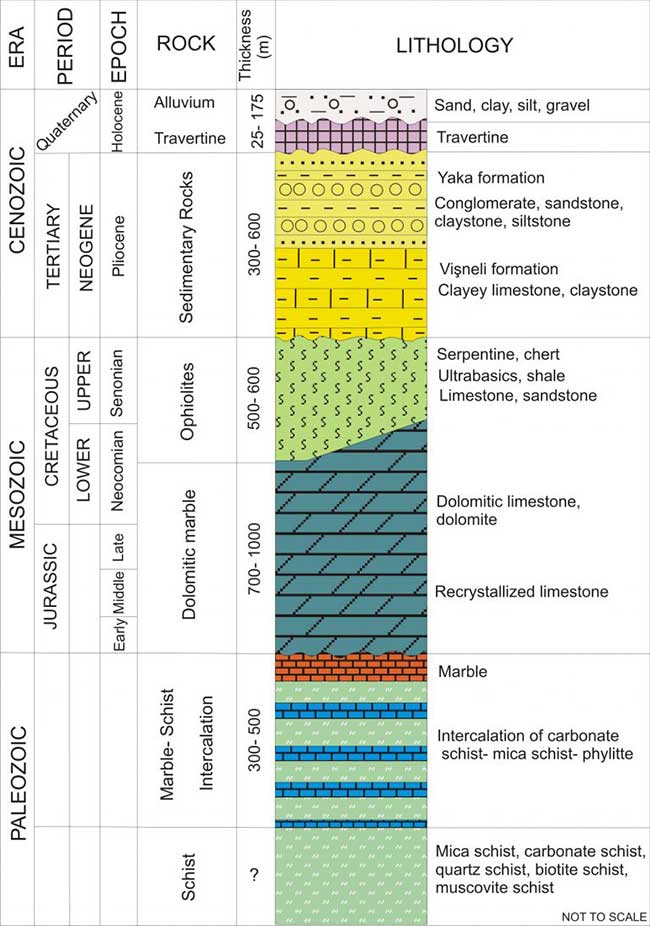 Figure 4: Stratigraphic column of the study area and environs (modified from Vural, 2009;Büyükşehin, 2016).

The field works for investigations of geothermal waters in Urganlı and environs were realised from 1994 to 2014. In this study, in-situ measurements such as temperatures, pH, Eh (mV), electrical conductivity (µS/cm) and alkalinity as well as sampling of geothermal waters in locations of hot springs and different production wells for the analyses of anions, cations and stable isotopes such as d18O, d2H and 3H have been carried out (Table 1). In total, we collected 7 samples of geothermal waters. In the field, the pH values of the water samples were adjusted in an interval between 2 and 3 by dropping of pure HNO3 for cation analyses. The major ion analyses of the samples were carried out in the Laboratories of the Freie Universität Berlin, GSF-Institute for Hydrology, Neuherberg, Germany and UFZ, Leipzig/Halle, Germany, for stable isotope analyses of (18O and 2H) and tritium (3H).

Table 1: In-situ parameters and hydrogeochemical analyses of the geothermal waters of Urganlı and environs. For further data see Özgür (1998).

In the study area, the Paleozoic metamorphic rocks, which consist of various types of cover schists including carbonate schists, form the impermeable basement rocks and play an important role in the formation of geothermal reservoir. Marbles in Paleozoic metamorphic rocks in terms of intercalations are suitable for the formation of reservoir rocks of the geothermal reservoir in the study area, due to the intense fragments and karst formation. The Paleozoic aged marbles as reservoir rocks are overlain by Pliocene Vişneli formation consisting of clayey limestone and claystone as a cap rock discordantly. The Vişneli formation is overlain by impermeable Yaka formation from the Pliocene as a second cap rock consisting of conglomerate, sandstone, siltstone and claystone concordantly. The last two formations are overlain by recent travertine deposits and alluvium discordantly, which are widespread in the area and can be considered as cap rocks.

The geothermal waters of Urganlı and environs were determined to be Na-HCO3 and Ca-Mg-HCO3 type waters in the Piper diagram using AquaChem software program version 3.7 (Figure 5; Calmbach, 1999). Hydrogeochemically, the geothermal waters in the study area display the dominant cations Na+K>Ca>Mg and dominant anions HCO3>SO4>Cl. Accordingly, the geothermal waters have high sulphate contents, which might be attributed to gypsum and pyrite mineral phases in impermeable cap rocks. The geothermal waters in Urganlı and environs are immature waters according to the ternary diagram of Na/100-K/100-SQR (MG) (Figure 6; Giggenbach, 1988). Moreover, geochemical thermometers of Na-K and Na-K-Ca show calculated reservoir temperatures ranging from 130 to 210 °C in the study area, which corresponds to measured temperatures in production wells (Büyükşahin, 2016). 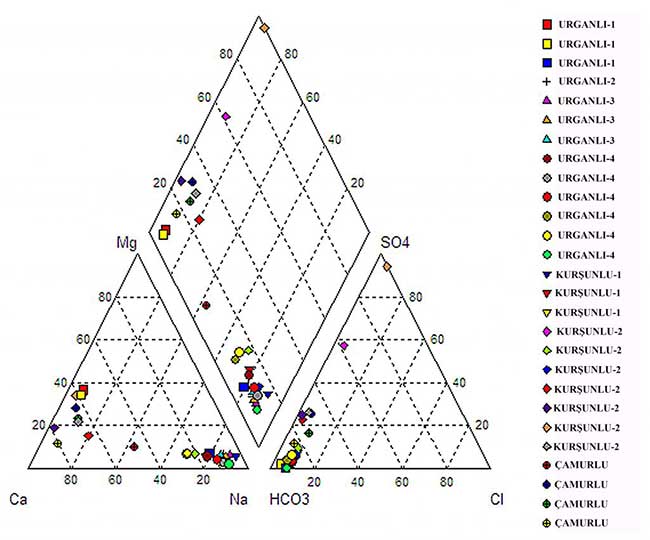 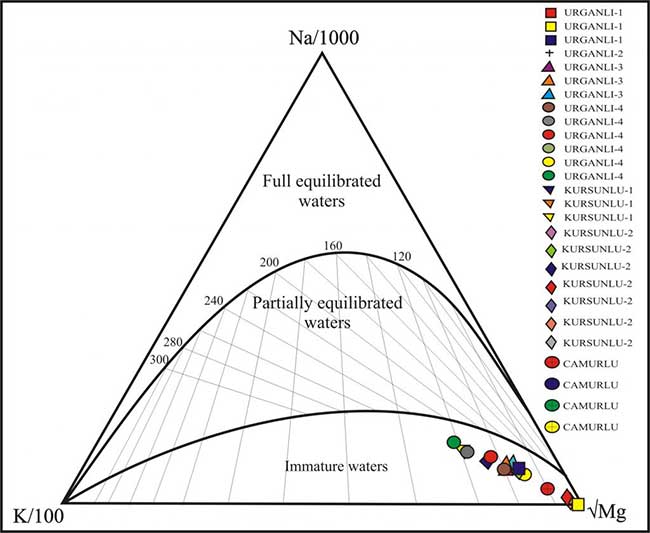 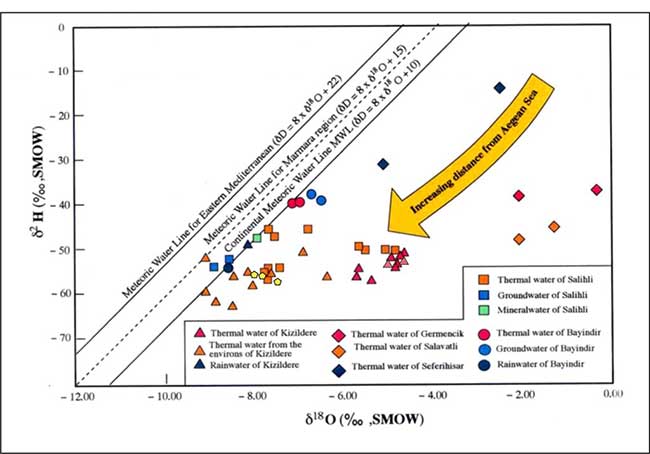 In the study area of Urganlı and environs, the Paleozoic various schists and marble form the basement rocks overlain by Cenozoic sedimentary rocks discordantly (Figures 2 and 3). The E-W trending Cambazlı fault in the area is an important tectonic lineament l (Figure 4). The thickness of the Neogene rocks increases from the Cambazlı fault in the south; in the southern part, there is a step fault system (Vural, 2009). From the Sarnıç horst, the normal fault system was generated to the N and S depending upon tectonic activities in the study area. The Cambazlı fault is very important in the geothermal field of Urganlı and ensures the formation of the geothermal waters.

The northern arisen block of the Cambazlı fault ensures outcrops of Paleozoic schists and marbles. The Cambazlı fault causes uplift of basement rocks, which form an E-W trending horst. The E-W or W-NW/E-SE trending tectonic lineament restricts the same uplift in the N. The schists and marbles along the Sarnıç horst in the study area are separated from the Neogene sedimentary rocks by a fault. In micaschists of the high elevation areas in the drainage area secondary fragments and fissures were generated, which are of immeasurable significance for the formation of geothermal waters as reservoir rocks. In the same way, the observed intercalations of carbonate schists in micaschists can be considered as reservoir rocks. Still, the observed intercalations of quartz schists in micaschists contain fragments and fissures due to their fragile structures. The quartz schists can contain groundwater due to their secondary porosity and permeability. In the study area, the marbles, which are generated in micaschists as intercalations, form the most important reservoir rocks due to their features of fragments and karst formations. 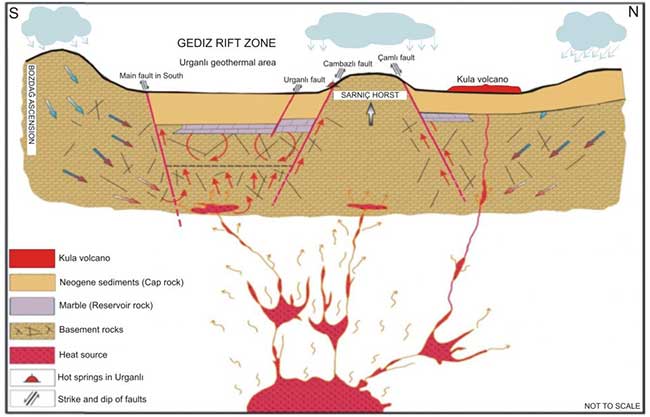 Figure 8: Hydrogeological modeling of the geothermal waters of Urganlı and environs (modified from Vural, 2009; Büyükşahin, 2016).

This study was funded by the Scientific Research Coordination Office of the Suleyman Demirel University, under contract numbers 4140-YL1-14 and 4730-YL1-16. We thank Mr Ümit Memiş and Mr. Mehmet Arıcı, Süleyman Demirel Üniversitesi, Isparta, Turkey, for completion of figures of this work. Moreover, we thank an anonymous reviewer for the examination and correction of the manuscript.