By Máté Osvald a*, János Szanyi b, Tamás Medgyes b, Balázs Kóbor a, Attila Csanádib


a Department of Mineralogy, Geochemistry and Petrology, University of Szeged
b InnoGeo Research and Service Ltd.
*osimate@gmail.com

The District Heating Company of Szeged supplies heat and domestic hot water to 27,000 households and 500 public buildings in Szeged. In 2015, the company decided to introduce geothermal sources into 4 of its 23 heating circuits and started the preparation activities of the development. Preliminary investigations revealed that injection into the sandstone reservoir and the hydraulic connection with already existing wells pose the greatest hydrogeological risks, while placement and operation of wells in a densely-populated area are the most significant above-the-ground obstacles. In the present study, the first project planned for the “Odessza” housing estate is summarised, and an analysis of integrating geothermal into district heating is offered.

Szeged is a municipality with 170,000 inhabitants located in the Southern Great Plain of Hungary. The municipal district heating system has 23 heating centres and supplies heat and domestic hot water to 27,000 households and 500 public users with a total energy output of 224 MW (Figure 1). 100% of this energy is produced by fossil-fueled furnaces. However, as the city is located on a sedimentary basin with great geothermal potential, and there is a growing need for sustainable energy utilisation systems with low emissions, introduction of geothermal energy into the system has been proposed. In our study, we give an overview of the supply and demand sides and suggest possible solutions for system integration. 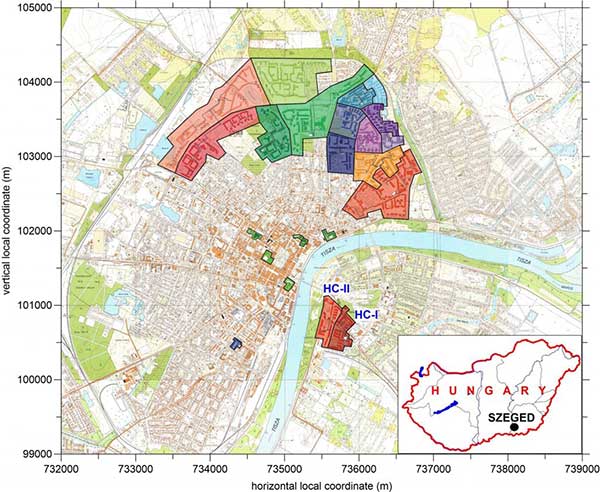 The Pannonian Basin is a sedimentary basin located in East-Central Europe, the basement of which consists of variously subsided basins and horst-like blocks. Apart from the main mass of the basement, which is made up of metamorphic Paleozoic rocks, the Mesozoic carbonate formations, which can be good aquifers, are found in some areas (Horváth et al., 2015). The Makó Depression and Békés Basin, divided by the Battonya Ridge, are the two main depressions of the Southern Great Plain (Figure 2). A thick layer of porous sediments covers this subsiding basement, which was deposited in the Pannonian period (Juhász, 1991). 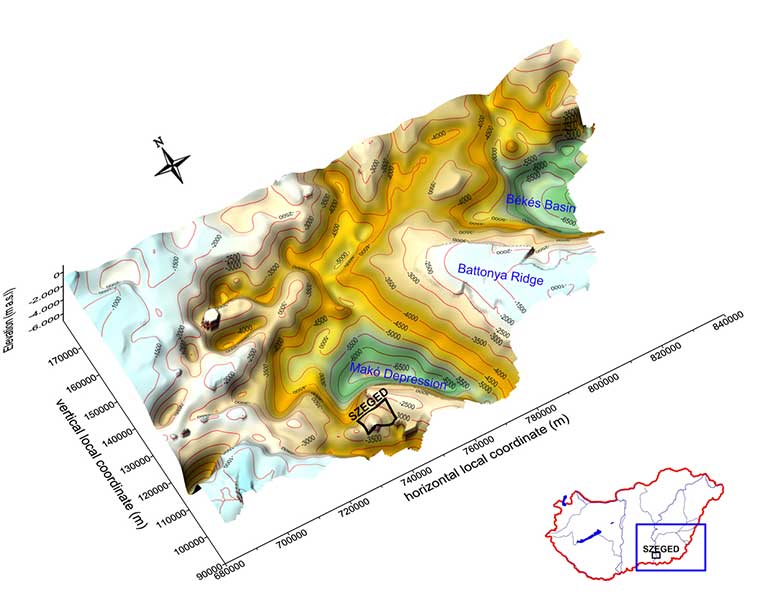 Figure 2: Structural geology of the region.

At the beginning of the Lower Pannonian period the Endrőd Marl Formation was formed, consisting of calcareous marl and clay marl. The latter is covered by the fine sand turbidite set of the Szolnok Formation, reaching a thickness of several hundreds of metres at some points. Above the turbidites, in the shallower basin areas, the hemipelagic marls are covered by the thick clayey-silty layers of the Algyő Formation with a prodelta facies (Figure 3) (Haas et al., 2012). The main feature of the set is the extremely high overpressure below and everywhere within the set. The sand content of the Algyő Formation is higher in areas with a shallower basement, thus the upper part of the formation can be regarded as water-bearing at some points. Generally, the Lower Pannonian formations are characterised by poor water-bearing features. 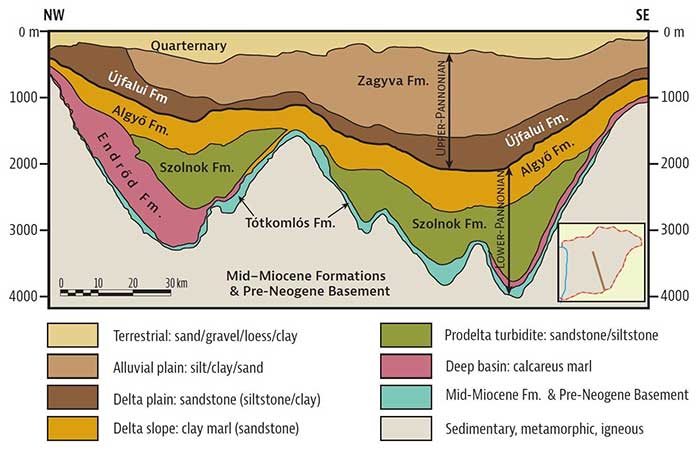 Figure 3: Sedimentological and stratigraphical geological cross-section of the Great Plain, Hungary (based on Juhász, 1991; Tóth and Almási, 2001; Szanyi et al., 2015).

The Lower Pannonian layers are covered by the Újfalu Formation and the Zagyva Formation. The Újfalu Formation has delta front and delta plain facies, and it is the most important Upper Pannonian sediment from a hydrogeological point of view. The sediment layers of the Zagyva Formation have deltaic background and alluvial plain facies. The dominant sediments are bed-filling and bay-mouth bar sediments that have good water-bearing features and limited horizontal dimensions, but they are hydrodynamically connected to multiple linear erosions and overlapping (Juhász, 1991). The bottom of the Upper Pannonian sequences is 2,500 m from the ground surface at the SW part of the study area and 2,000 m at the NE wing. The thickness of Upper Pannonian sediments in the Southern Great Plain reaches 1,800 m in the Makó-Hódmezővásárhely Depression, and exceeds 2,000 m in the Békés Basin.

The effective porosity of Upper Pannonian sandstone reaches 22–25%. The permeability of the Upper Pannonian reservoir, which consists of highly permeable sand layers, reaches 2000 mD (1.97 × 10-12 m2); this corresponds to a hydraulic conductivity of 5–10 m/day. Depending on the cementation degree of the sandstone grains (usually by quartz overgrowth, calcite or kaolin), the sandstone can be consolidated or unconsolidated. The cementing status of the sandstone plays a key role in porosity and stability, especially during production and injection. The sandstone induration increases with depth, as the cementitious material precipitates into the pores from the fluid extracted during compaction. The sand bodies are divided by thinner fine-grained sediments (Korim, 1991; Bálint and Szanyi, 2015; Szanyi et al., 2015). The presence of the permeable reservoir and the outstanding geothermal conditions make the Pannonian basin suitable for geothermal energy utilisation (Szanyi et al., 2009).

Due to the position of district heating circuits and the number of already existing geothermal and hydrocarbon production wells in the city of Szeged, there is space for no more than 6–8 new geothermal heating systems (Figure 4). The first of these, to be set up on the left bank of the Tisza River in the “Odessza” housing project, is designed to operate with one production and two reinjection wells, and will provide more than 60 TJ energy. This article discusses the feasibility of such a system.

According to the plans, a 2,000 m deep production well will be completed and screened between 1,800 m and 1,900 m. The structure of the well is telescopic, the diameter of casings ranges from 13 3/8” (340 mm) to 5 1/2” (140 mm), and the operational lifetime is planned to be a minimum of 50 years. A submersible pump provides maximum 80 m3/h flow rate to the 90 °C thermal water from the production well. The flow pressure is at 2 bar in the whole cascade system, which is air-tight and pressurised until the buffer tank of the injection well. This implies that there is no degassing at the production well. There are 2 reinjection wells designed, both with 2,000 m depths and a 40 m3/h flow rate. The perforation is between 1,800 m and 1,900 m. The structure of the wells is telescopic, the diameter of casings starts at 13 3/8” (340 mm) and ends at 7” (178 mm). There is a 50 m3 buffer tank before the injection wells. The filter system has a pore size of 50 µm and is fully automated with pressure meters to indicate clogging and to control the automatic washing.

The heat is utilised through a main titanium heat exchanger with 3.5 MW performance. The primary circuit fluid is 90°C in temperature and has a flow rate of 70 m3/h and the secondary circuit fluid has an 88/50°C heat step and a flow rate of 80 m3/h. This central heat exchanger provides heat to two heat centres, and it is there that the geothermal system is integrated with the already existing district heating system. The current “Odessza” system is 100% natural-gas-based and utilises three heat circuits, each has 90/65 C, 80/60 C and 60/40 C heat steps with the following performance:

Approximately one fifth (18%) of the 1144 residences in HC-I recently had fenestration renovation and 46% had external insulation installed. These ratios are slightly better in the case of HC-II, where 65% of the 1163 residences had window renovation and 59% had external insulation. Large scale energetic modernisation would significantly lower the energy need for heating in both circuits and would make a higher utilisation rate of geothermal energy possible with a lower heat step of 60/40°C. This would remarkably increase the ratio of geothermal energy use (up to 90%). The total estimated savings in natural gas is detailed in Table 2.

The natural gas saving also contributes to lower environmental impact through lower greenhouse gas emissions in the system. The emission of carbon dioxide is decreased by 2,957 t, sulphur dioxide by 343 kg and nitrogen oxide by 2,992 kg annually. The greenhouse gas emission prognosis is less than 90,000 t CO2 equivalent for 30 years’ lifetime.

The interaction between the new wells and with the already existing wells was modelled and is shown in Figure 4. The model resulted in a minimal (almost zero metre) change in the hydraulic head due to the effect of simultaneous injection. This means that, with responsible operation and with proper reinjection, the pressure of the reservoir can be maintained and the geothermal resource can be harnessed in a sustainable way. 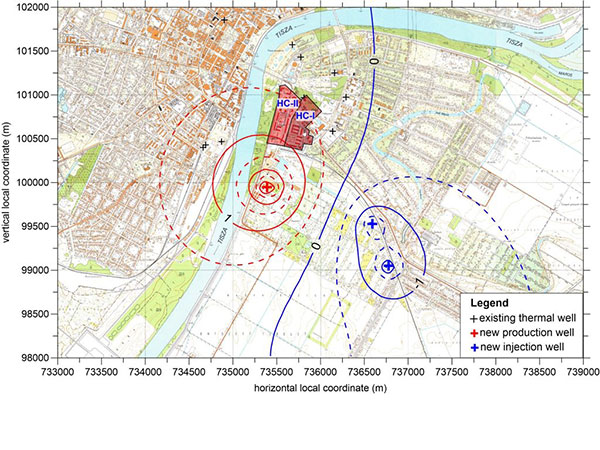 Approximately 52 TJ of geothermal energy will be utilised by the project with these settings. The total capital cost of the project is approximately EUR 420,000 net, which includes well construction, pipeline installation and other related works. With governmental and European Union funding the return rate is calculated to be less than 10 years.  The maintenance cost is calculated at net 2.18 EUR/GJ (at 51,825 GJ/year).

The heating system discussed in this study can supply more than 50 TJ of geothermal heat in a sustainable way. The project is designed to satisfy 70% of the total heat demand in the area by geothermal energy; however, with further insulation and other energy saving refurbishments on the end-user side this rate could reach 90%. Later on, consumers with lower temperature demand can be attached to the system, increasing pay-off. As is shown by the calculations, a remarkable decrease in greenhouse gas emissions will be achieved, which makes the project eco-friendly. The sustainability of the geothermal system’s operation is ensured by the reinjection of the heat depleted thermal fluid in order to maintain the pressure of the reservoir.

The DARLINGe project is co-funded by the European Union (ERDF and IPA) under Grant Agreement No.DTP1-099-3.2.