Earth Learning Idea is a web-based, global teaching resource. It provides freely-downloadable activities for teachers of science, geography and related subjects. All are written in the same format, with the activity described first, followed by full teacher back-up, including context, pupil learning outcomes, underlying principles and thinking skills. The activity described here models geothermal power sources and challenges pupils to say whether they are renewable or not. The apparatus, involving a density can and gravel, is simple to assemble and can be used to simulate ‘hot dry rocks’, ‘hot wet rocks’ and hydrothermal power. Ground source heat pumps are also discussed. The statement, found in many science textbooks, that ‘geothermal energy is renewable’ is debated.

Earth Learning Idea, accessible at http://www.earthlearningidea.com/, was set up in May 2007, for the International Year of Planet Earth, with the intention of reaching as many children throughout the world as possible, particularly those who suffer from lack of resources and from lack of thought-provoking teaching. The aim is to foster a better knowledge of the natural world and how it works, encouraging the joy of knowledge about the Earth in those who may not otherwise have the opportunity to receive it.

Earth Learning Idea publishes a new Earth science teaching activity every two weeks. By the end of 2016, 251 activities had been published in English and another 20 activities were in preparation. All are written in the same format, with the activity described first, followed by comprehensive teaching notes, including context, pupil learning outcomes, underlying principles and thinking skills. All activities are made available as free-to-download pdf files with a download rate of more than 40,000 per month and the total number of downloads approaching 3 million (King, 2017; King et al, 2007, 2010, 2013, 2014). The website carries, or links to, more than 820 translations of activities, facilitated through a voluntary collaborative global network. The translations are chiefly in Spanish, Catalan, Portuguese, Norwegian, Italian, Japanese and German, but also in Polish, Slovakian and South Korean. We are hugely grateful for the efforts of our colleagues around the world in translating all these Earth Learning Ideas.

The activity below describes an edited version of just one of the 250+ Earth Learning Idea activities – focussed, in this case, on geothermal power.

Add water to a heated gravel-filled density can, to model three types of geothermal power source, like this:

Fill the density can with coarse permeable gravel and carefully insert a vertical PyrexTM tube until it nearly reaches the bottom, as shown in the diagram, Figure 1. 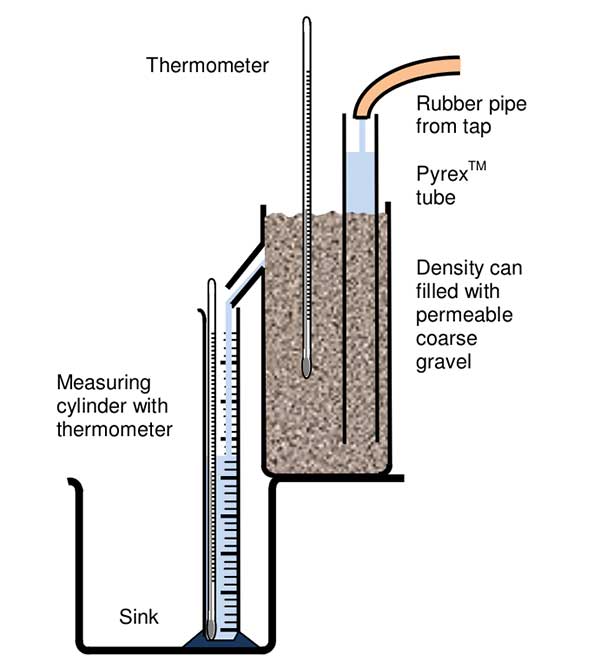 Then heat the apparatus up in an oven or on a hot plate (e.g. to 100 oC); be aware of the safety risk from the hot can. Once hot, add a thermometer or temperature probe to the top of the gravel, and get a container ready with a thermometer to catch overflowing water and measure its temperature.

Then use this apparatus to model the following forms of geothermal power source, Figure 2: 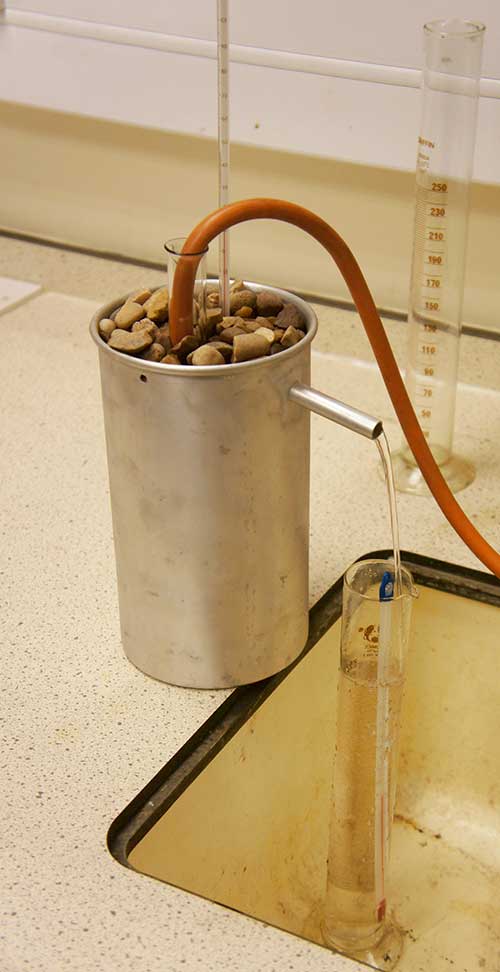 Model this by adding water steadily to the PyrexTM tube and catching the overflow, whilst monitoring the temperature of the gravel and overflow water. ‘Hot dry rocks’ are rocks like granite that have become warm over millions of years of decay of the radioactive minerals they contain. The heat can be extracted by drilling two boreholes into the granite, ensuring these are connected by cracks, then pumping water around the system.

Simulate this as described above, but first, fill the hot can with water until it just overflows, then leave it for some time (e.g. 5 minutes). This models how water trapped in deep permeable rocks (aquifers) that are insulated by thick sequences of overlying rocks, can accumulate geothermal heat. ‘Extract’ the heat by adding water to the PyrexTM tube, as above, monitoring the gravel and overflow water temperatures.

To model this, stand the density can on a hot plate and repeat the activity. Hydrothermal power is extracted where there is a source of geothermal heat near the Earth’s surface, as found in places like Iceland, Italy, Japan, New Zealand and the Yellowstone area of the USA. ‘Extract’ the heat from the model by adding water down the PyrexTMtube, as above.

Alternatively, run just one of these models, and use the findings to discuss how the other two might work.

Now ask the pupils to use what has been found from these simulations to discuss which, if any of these geothermal power sources is renewable.

Finally, discuss the proposition, found in many science textbooks, that ‘geothermal energy is renewable’.

Topic: Using a density can filled with gravel to model different forms of geothermal power source.

These simulations clearly show that:

Note: You can do the first demonstration just by pretending the density can has been heated, by touching it and pretending to burn your fingers – whole classes have been convinced by this!

A fourth source of power, which is sometimes described as ‘geothermal’, is ‘ground source heat pumps’ where water from an underground or surface source has its heat extracted for warming buildings and is recycled. However, since some 98% of the power in these systems comes from solar heating of the Earth’s surface, and only around 2% is true geothermal power from the Earth, this is not geothermal power in the sense described above. Air-source heat pumps are also available, where heat is extracted from the air, rather than from the ground.

Following up the activity:

Ask pupils to research how ‘ground source heat pumps’ work, and whether or not this power source can be described as ‘renewable’. It can, since heat can only be extracted at the same rate as it accumulates.

If one run of the activity is carried out, and pupils are asked to use this to discuss how the set-up might behave in the two other circumstances, they will use the mental ‘construction’ of one model and apply it to the two other models. This will provoke pupils into considering and re-working their pre-conceived ideas of how geothermal power is generated. Discussions around the models, and their links with reality, involve more powerful knowledge of the principles and processes. Linking each model with its ‘real world’ operation develops a greater awareness of how geothermal power works in different geological contexts.

Earthlearningidea: ‘Power through the window:  which power source might be built in the view you can see from your window?’

The model was described by Adrian Cook in the Earth Science Teachers’ Association’s ‘Science of the Earth’, ‘Rock power! – geothermal energy resources’ unit (1991), published by Geo Supplies, Sheffield. It was based on an activity originally described in ‘Introducing Earth Science’ by James Bradbury (1986) published by Blackwell, who gave permission for its use.