EurGeol of the month: Remi Bosc

“European Geologist of the month” is a new category of EFG’s monthly newsletter GeoNews. Each month we ask one of the European Geologist title holders to tell us about his professional experiences and which role the title has played for his career. This month we interview Remi Bosc, member of the Geological Society of France. 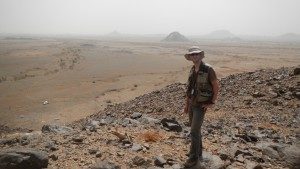 In which country do you currently work? – Our consultancy office, Arethuse Geology, is based in France, but we spend a lot of time on exploration grounds in Africa and Middle East, mostly Sudan and Ivory Coast where we have offices, but as well Mali, Guinee, North Africa, etc.

In which field of geology do you work? – Exploration and mining geology, mostly on precious and base metals, but as well phosphate, bauxite, and industrial minerals.

Could you give us your opinion on the advisability of being member of a professional association? – Most of our counterparts in Australia and Canada have included the membership of a professional organisation as part of their normal professional practices. It helps to federate and homogenise practices, recognition in and outside our borders, and interact with our colleagues from other continents. This level of professional association is as well a good opportunity for bringing our profession another level of practices and recognition outside of the field of geology. It implies as well giving time for the community.

Do you consider that these titles represent an added value for finding a job? – It’s a recognition that a geoscientist has made a move for formally validating its professional practices. As member of EFG or equivalent titles on other continents, there is as well a commitment for a sustain level of professional practices and ethics standards. It may become useful for job posting at a certain level of management.

What does this title allow you to do? – In the minerals industry, regulation instruments for mineral resources and ore reserves, such as the Australian JORC, and the Canadian NI43-101, consider that being part of a recognised professional organisation, like EFG, is a pre-requisite. Consequently, it implies that signing off technical work for a number of regulatory agency, investors, financial institutions, and a number of private actors, requires to hold a European Geologist title or equivalent, along years of experience in a specific field. It implies of-course endorsing the works done by yourself, and often by a larger team of geoscientists, and a higher level of responsibility. Exploration and mining companies will eventually seek such a professional to endorse its results and thus valorise its mineral assets.

Currently a demand of geologists exists abroad. Would you advise unemployed geologists to look for a job outside your country? – The key word is to get as much exposure as possible. To different rocks, to different organisational cultures, to different approaches and people. Traveling and hands-on field work certainly helps.

Did you already work abroad? If yes, could you tell us more about your international experiences? –Finding new places, thinking around the corner and preferentially going to places where you’re not supposed to go: travelling is part of the DNA of mining exploration. Currently based in France, I had the opportunity to work in a number of countries on several continents: Africa, SE Asia, and of course Europe. Most of the geologists we meet are seasoned opened mind travellers which makes it always an entertaining time. Mineral exploration is a strange mix of exploration, expeditions, academic knowledge on the earth history, and frontier human organisation, which makes it especially attractive and of course challenging.