The changes in the exploitation of natural stones emphasise the continuous changes of cultural landscapes. The widespread Miocene rhyolite tuffs of the Tokaj Mountains usually became intensively silicified, increasing the hardness of the material. The grinding of cereals and ores required high quality, long lasting millstones from the mining industry. The hardest, silicified varieties were carved from the 15th century until the 1970s. The quarries are scattered throughout the mountains; amongst them three sites were selected for detailed assessment. The geoconservation value of the historical quarries is well illustrated by the exposed special geological features and remnants of historical stones. The silicified tuffs demonstrate that anthropogenic landforms could have significant geoconservation roles, and these geodiversity elements might enhance geotourism activities.

Geoheritage is a generic but descriptive term applied to sites or areas of geological features with significant scientific, educational, cultural, or aesthetic value (Brilha, 2016). The anthropogenic landforms of mining (including quarries, underground adits, open pits, etc.) have fundamental importance in geoheritage studies (e.g Kubaliková, 2017; Prosser 2019) providing valuable resources for recreation and geotourism. The Tokaj Mountains are made of Miocene intermediate (andesite) and silicic (dacite, rhyolite) volcaniclastics and volcanic rocks, providing exceptional geodiversity which has attracted earth scientists from the 18th century. The volcanism is associated with continuous circulation of hydrothermal fluids, causing physicochemical changes in volcanic rocks and resulting in different types of alteration (silicification, potassic or argillic alteration, etc.) (Pécskay & Molnár, 2002). The exploitation of primary and altered rocks covers thousands of years of human history. At different levels of social and technical development more and more raw materials became of interest, starting from the early Neolithic obsidians.

The silicified zones of volcaniclastics and subordinate sedimentary deposits were suitable for high quality millstones. After the first mention from the 15th century, the silicified materials were the most popular and important products of this area for more than six centuries (Hála, 2003). Technological and market changes indicated development and evolution in quality and quarrying techniques, from handmills to the grindstones used for precious metal bearing ore grinding at Telkibánya. The silicified deposits are usually associated with clay minerals supporting a famous ceramic industry, which had its golden age in the 1800s. Data on ancient quarries were registered in the early national geological mining inventory of Hungary (1904) and also in recent databases (Atlas of European Millstone Quarries, Historic Quarries) highlighting the continuous national and international interest in this special industry of the cultural landscape. These emphasise that abandoned quarries are important elements of geodiversity, but there has been no comprehensive research on their current condition. The present paper describes three quarry sites, in terms of their geological conditions and geography of the cultural landscapes, involving their additional natural and anthropogenic values, which are important from geoconservation and geoeducation points of view.

The inventory and assessment of geodiversity is essential for the preservation of geoheritage. The study of these specific mining landforms follows the steps discussed in various papers (e.g. Kubaliková, 2017; Szepesi et al., 2017). First, the review of the literature includes an  overview of geology, mineralogy, historical geography and industrial history papers. After compiling a preliminary inventory (Fig 1), three quarry sites were chosen for detailed study with collection of available data and field descriptions. 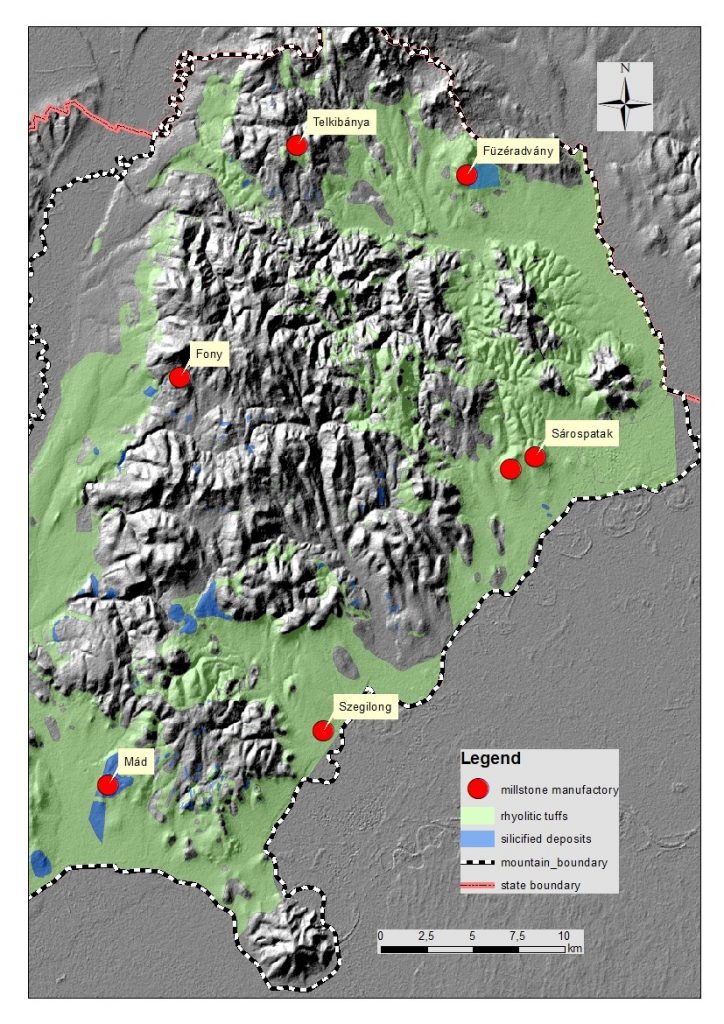 Figure 1: Miocene rhyolitic tuffs in the Tokaj Mountains and inventory of the millstone manufactories. The selected sites are underlined.

The selected sites are situated in the northern and the eastern parts of the mountains and represent current use in geotourism. Megyer Hill, with a lake in the quarry, is the most spectacular anthropogenic object in the mountains. Füzérradvány was the most important site for illite mining. Telkibánya was famous for gold mining for centuries. Due to the mineral stock, there is a history of scientific research at all three locations. Beside the detailed geological and mineralogical studies (e.g. Széky-Fux, 1970; Pécskay & Molnár, 2002; Szepesi & Ésik, 2015) mining and industrial history were also published (Hála, 2003; Benke, 2009). Detailed description of the sites includes general information with maps and photographs, a brief summary of geological settings, and additional natural and anthropogenic values. The final assessment presents suggestions for site management regarding geoconservation and geotourism development.

The areal distribution of rhyolitic tuff and hydrothermal materials in the Tokaj Mountains demonstrates the role of explosive volcanism and post-volcanic alterations (Fig. 1). Variable silicified deposits have been utilised as quality millstone resources for several centuries, as demonstrated by the large number of abandoned quarries (Fig. 1). The inventory and description of the three quarries are compiled in Tables 1–3.

The three quarry sites (Fig. 2a-d) are important geoheritage elements that have achieved a very high scientific, historical and cultural value in the region. They represent very similar geological settings: the silicified zones are easily recognised as resistant outcrops at higher elevation, which are surrounded by argillic rocks. The quarries excavated silicified rhyolitic lapilli tuffs. The additional sandstone, conglomerates and rhyolites were also altered in Telkibánya. Depending on hydrothermal zonation, the clays were also mined as raw material (Table 1). The largest stocks developed in the Füzérradvány area and were extracted almost to the present day, but important excavation occurred at the other two locations, too. Telkibánya was the predecessor of the famous Hollóháza porcelain factory.

The millstone manufactories were founded in the Middle Ages and the last one was worked until the 1970s. Based on the geological characteristics and quarrying techniques, different styles of stones can be identified. The manufactory started with monolithic stones. The size depended on the type of utilisation (hand or water mills). These one-piece stones could be found recently in the quarry yard of Megyer Hill (Fig. 3a) and Füzérradvány (Fig. 3b). Unfinished or broken ones are observable at all three sites (e.g. Fig. 3c, Telkibánya). Ore processing required different, mortar-like stones from the harder quartzite exhibited in the courtyard of Telkibánya Museum as ex-situ geoheritage (Fig. 3d). During the 19th century the milling technique was changed to one with faster rotation (power mills), and long-lasting stones from harder rock were required. The “French-style” millstones were made from cemented pieces (12-16 tiles). Production has become easier and more productive and replaced the monolithic types. The famous Sárospatak millstone won the First-Order Medal of the 1862 World Expo in London, and due to production of this millstone prices were reduced by half compared to the original French market (e.g. La Ferté sous Jouarre Quarry, Atlas of Millstone Quarries). The expansion of steel rolling mills heavily influenced manufacturing in the 20th century. After a continuous decrease in productivity Megyer Hill ceased to operate in 1906. Stones from Király Hill were ordered and delivered even during World War II (Hála, 2003). The last millstone was taken in 1979, when excavation in the Király Hill quarry terminated. 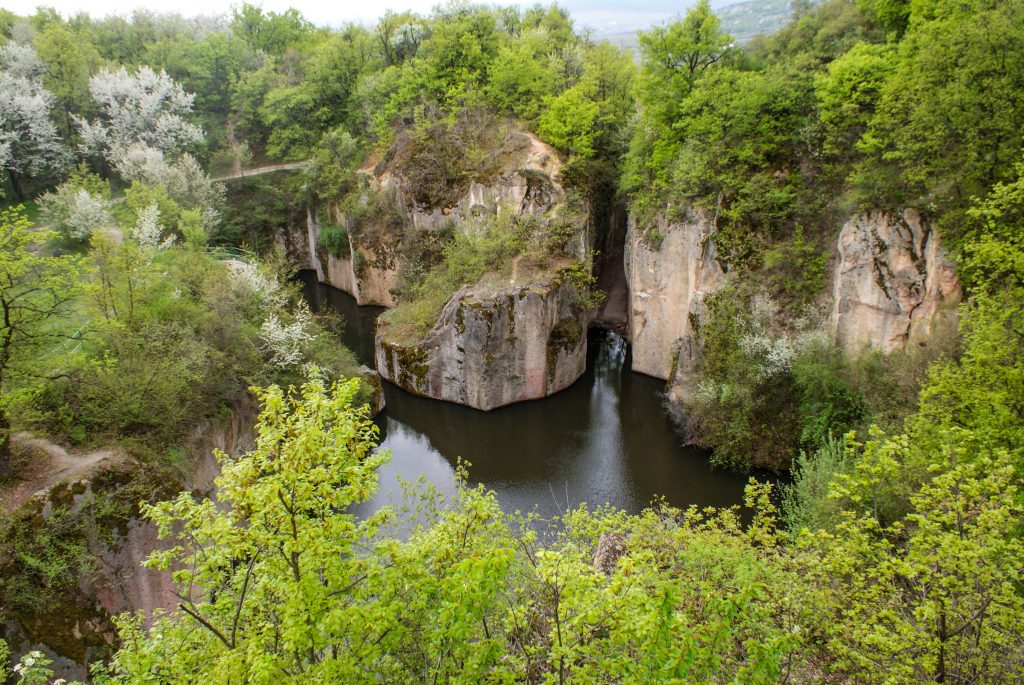 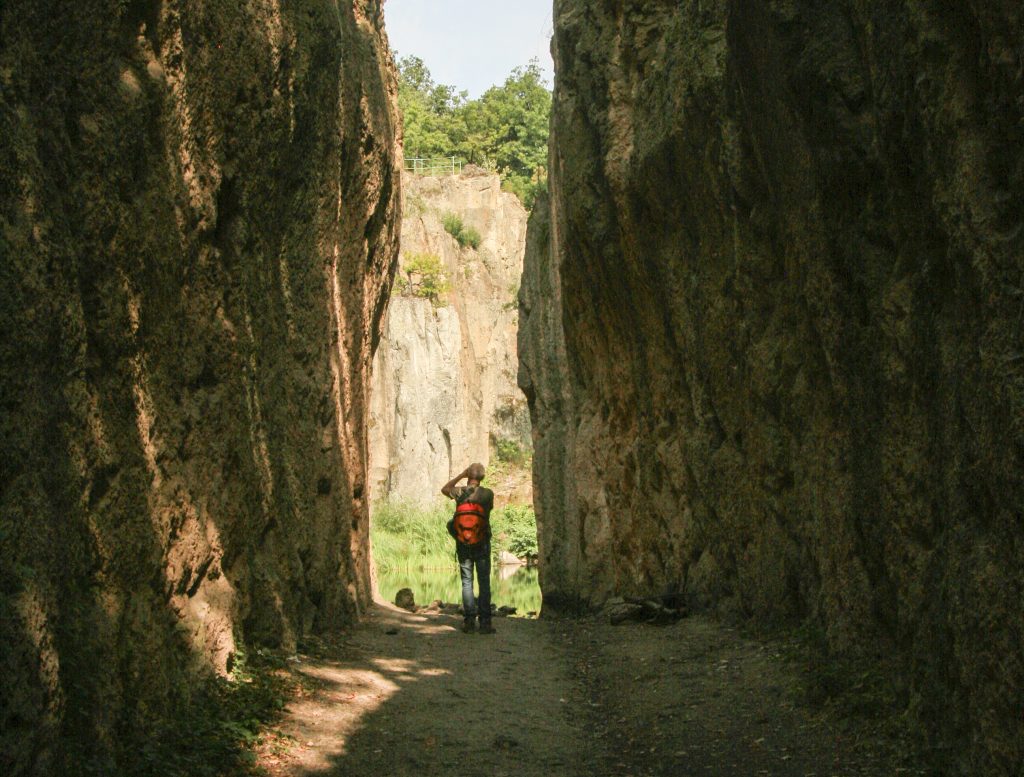 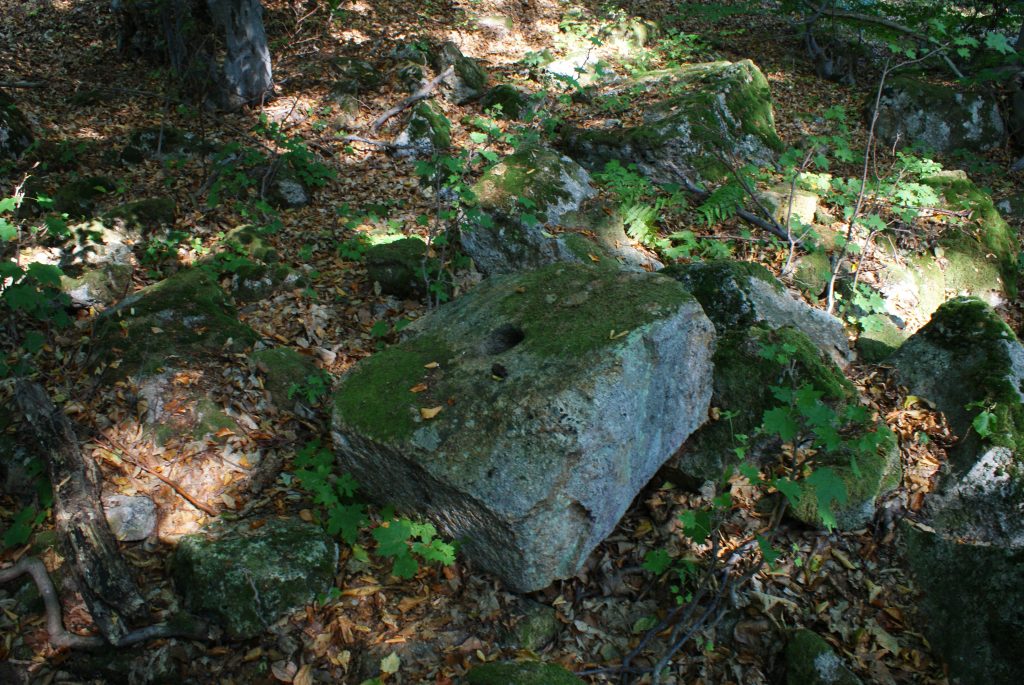 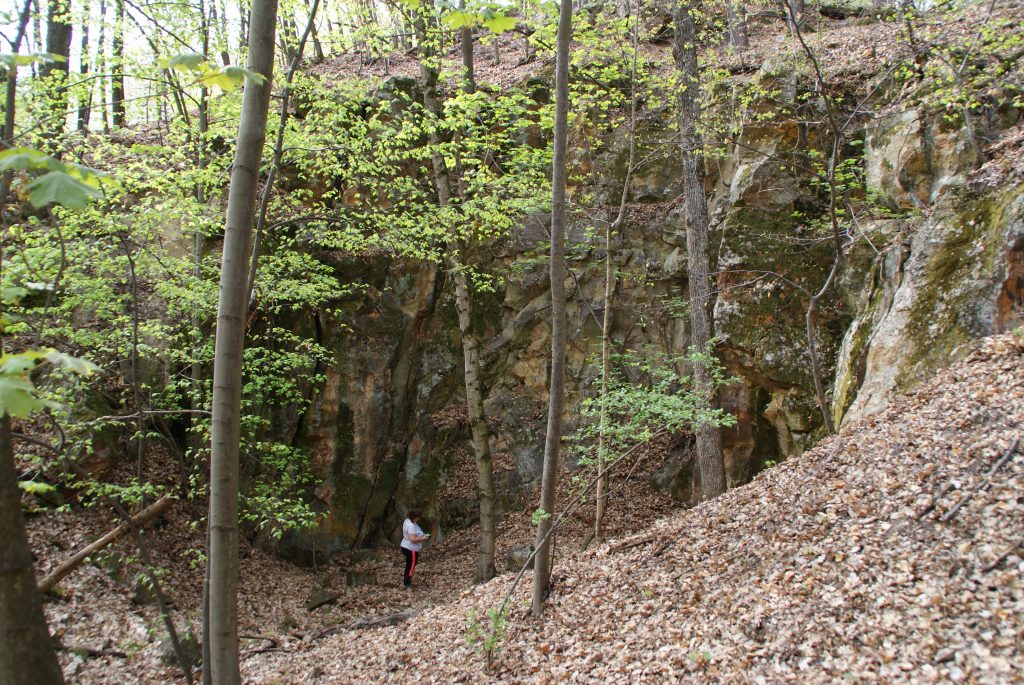 Figure 2: The three millstone quarry sites: a) Megyer Hill; the first level is under water; b) the canyon-like road cut carved for lake drainage and transportation; c) an unfinished millstone with central hole as first phase of shaping; Telkibánya, Kánya Hill; d) vertical walls of Korom Hill Quarry; the underground hole from where illite was excavated (at the right side of the photo) today is a protected bat habitat. 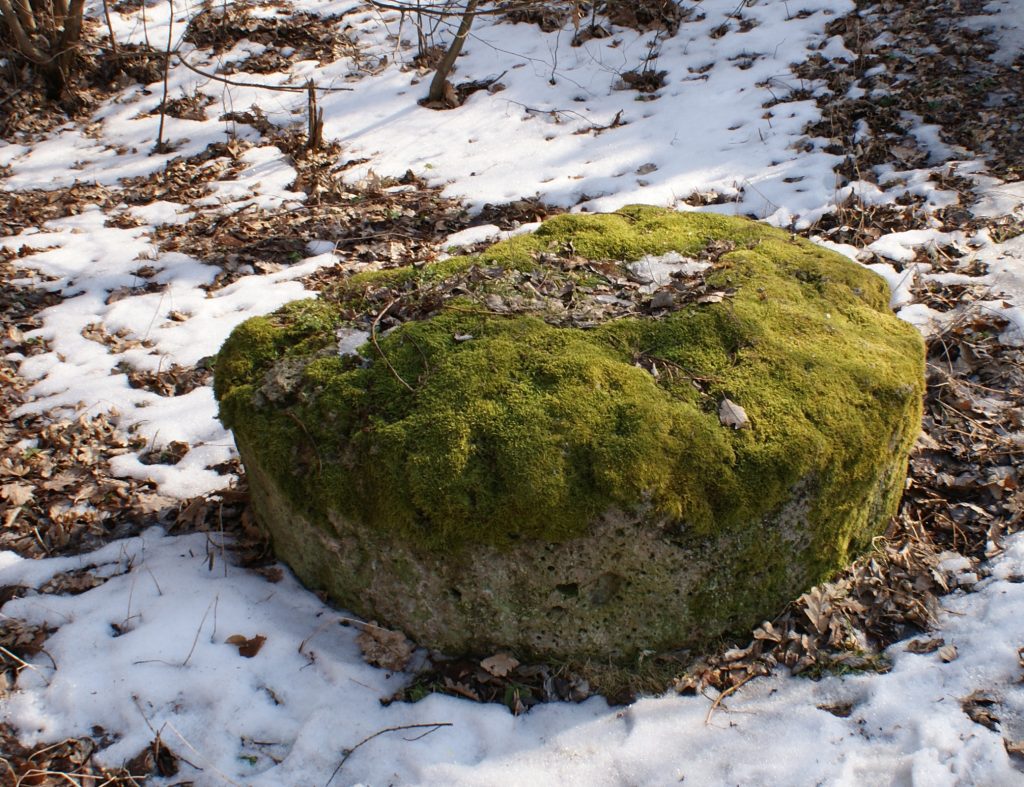 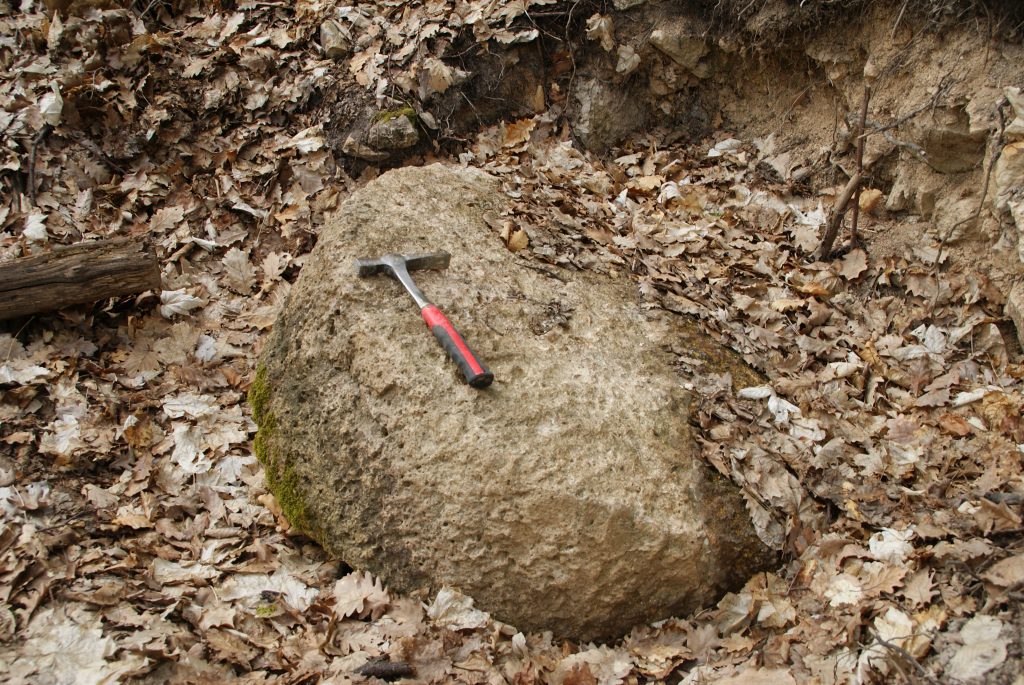 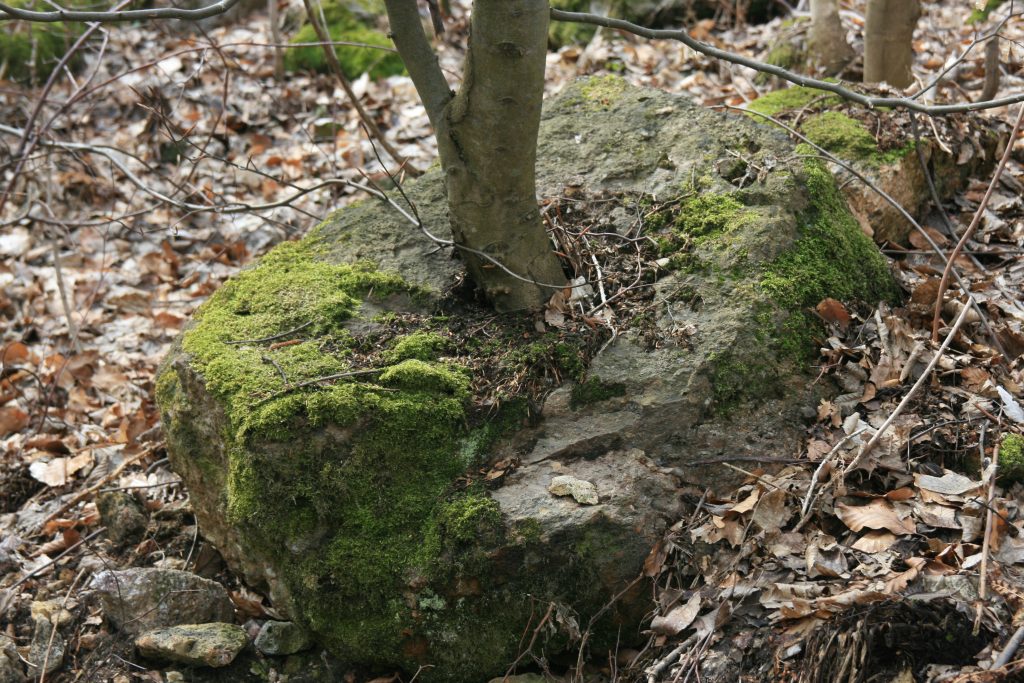 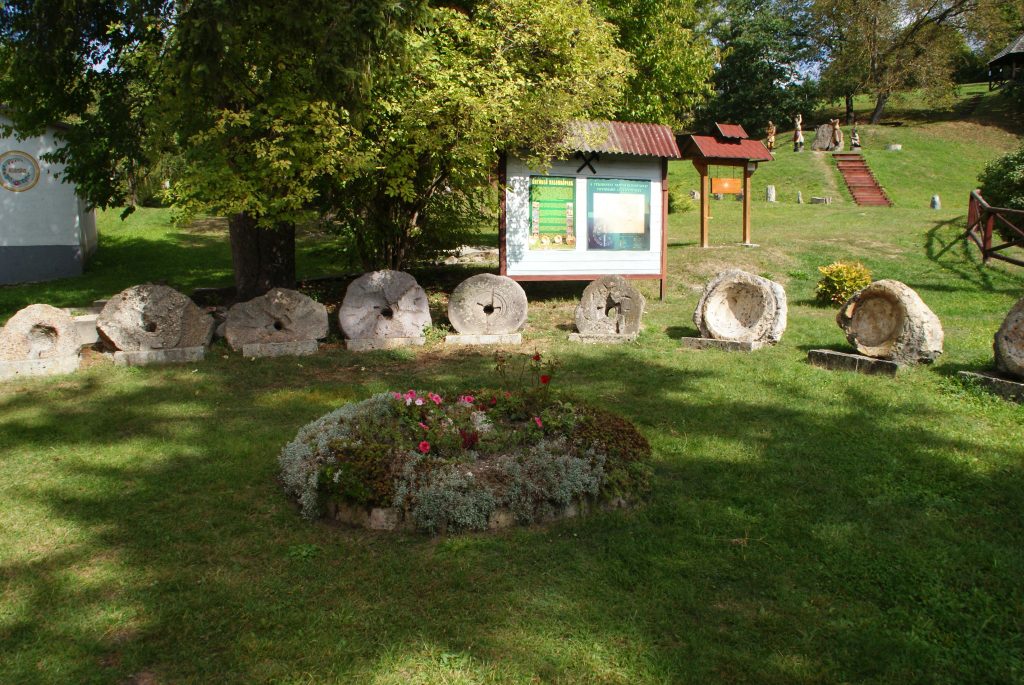 Anthropogenic landforms are attractive landscape features and usually included in natural and cultural heritage (Kubalíková 2017, Prosser 2019). Geoconservation aspects are summarised in Table 2. Megyer Hill is a well-known nature conservation area in Hungary, where the geological, landscape, cultural, and ecological values defined a complex geosite. The amazing 1.1 ha quarry yard with the area of Megyer Hill was listed as a natural reserve in 1977 and became a nature conservation area of national interest in 1997. The quarry is an important cultural landscape element and also part of a UNESCO World Heritage Site (Tokaj Wine Region Historic Cultural Landscape) (Szepesi et al. 2017). The other sites are unprotected, but they were surveyed for further geoconservation action in 2018-2019 to establish new natural monuments. The degradation risk of the sites depends on the extent of tourism. Megyer Hill is one of the most visited sites in the Tokaj Mountains, which has caused trail degradation and  serious problems with communal waste. The Telkibánya area is famous for mineral collecting activities. The area surrounding the mining site is listed in a national collectors’ database as a location of quartz variants and sulfide minerals.

The preliminary assessment of the regional geodiversity summarises the current state of geotourism in the Tokaj Mountains (Szepesi et al., 2017). The importance of geoheritage is recognized by the establishment of geo-educational trails. The first self-guided path (Fig. 4a) was created in Füzérradvány (Kiss et al., 1999) but trail facilities are currently degraded and need renewal. The “Millstone” Nature Trail was established in 2001 by a civil initiative to demonstrate the most important natural and cultural-historical features. The trail was partially renewed in the quarry (2015). The improved information panels (Fig. 4b) focused on quarrying and mining history. The city of Sárospatak received additional funds for further development of the lake environment in the Megyer Hill area. The via ferrata route around the wall was completed (2019, Fig 4c.). The development will be supplemented in the near future with a museum, a lookout tower and a suspension bridge. The development of the Telkibánya area was a complex PHARE cross border activity including Hungarian and Slovakian partners (University of Miskolc, Local Authority of Telkibánya, and Technical University of Košice). A new educational trail (“Gold miners’ walk”, established in 2011, Fig 4b.) connects the mining heritage objects (underground adits, open pit field, buildings, etc.). The establishment of an educational centre was another important area of development supporting field trips for university and high school education. 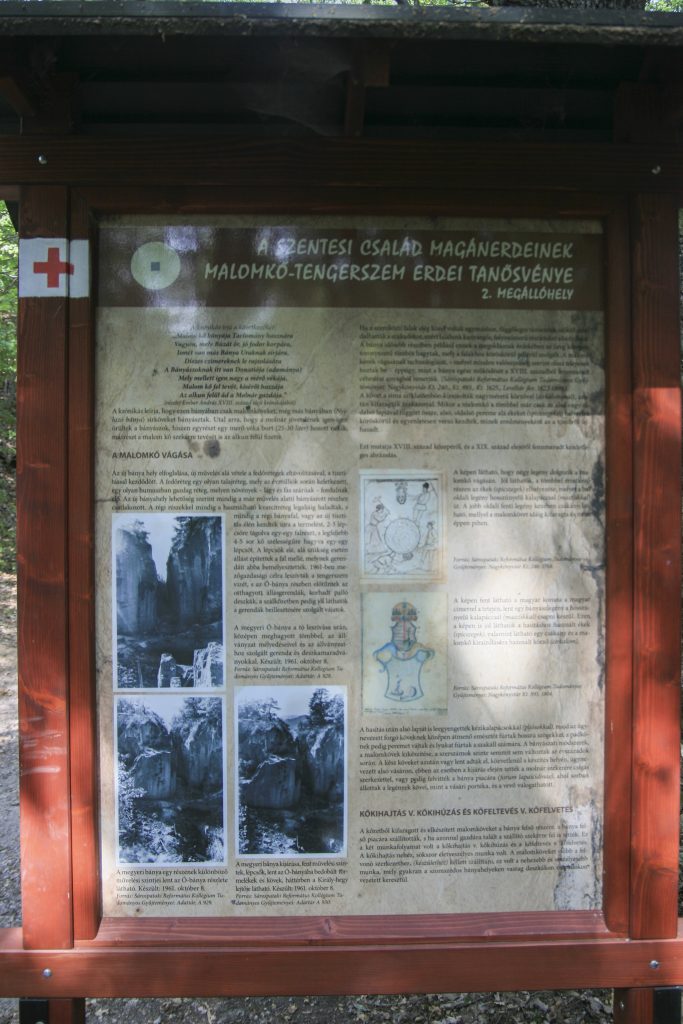 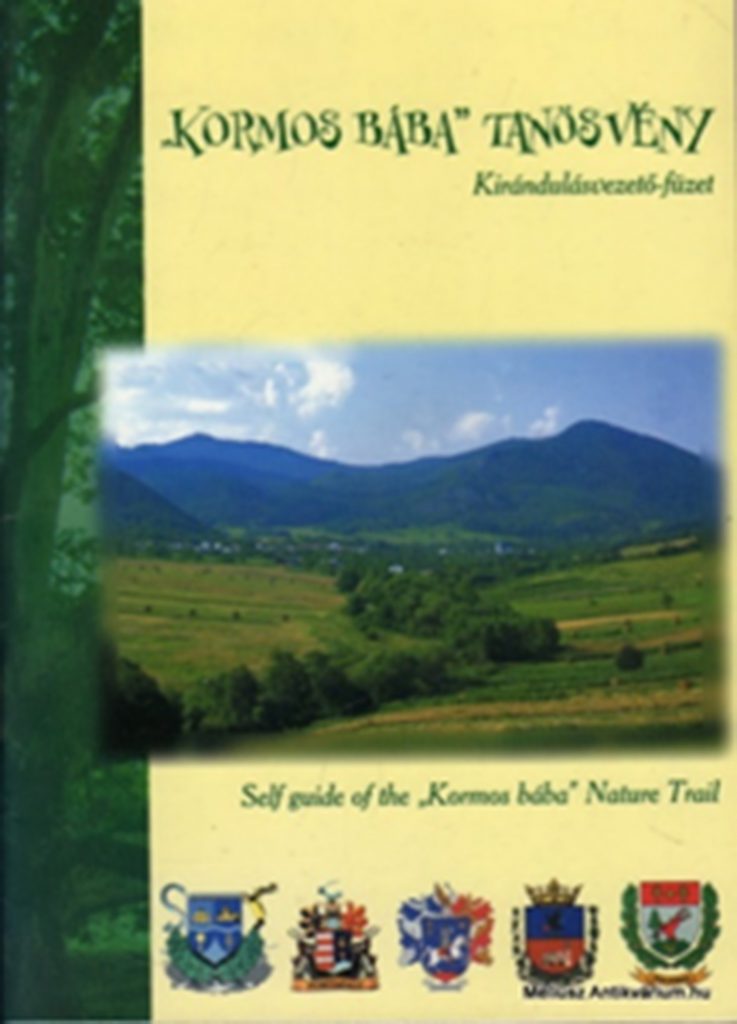 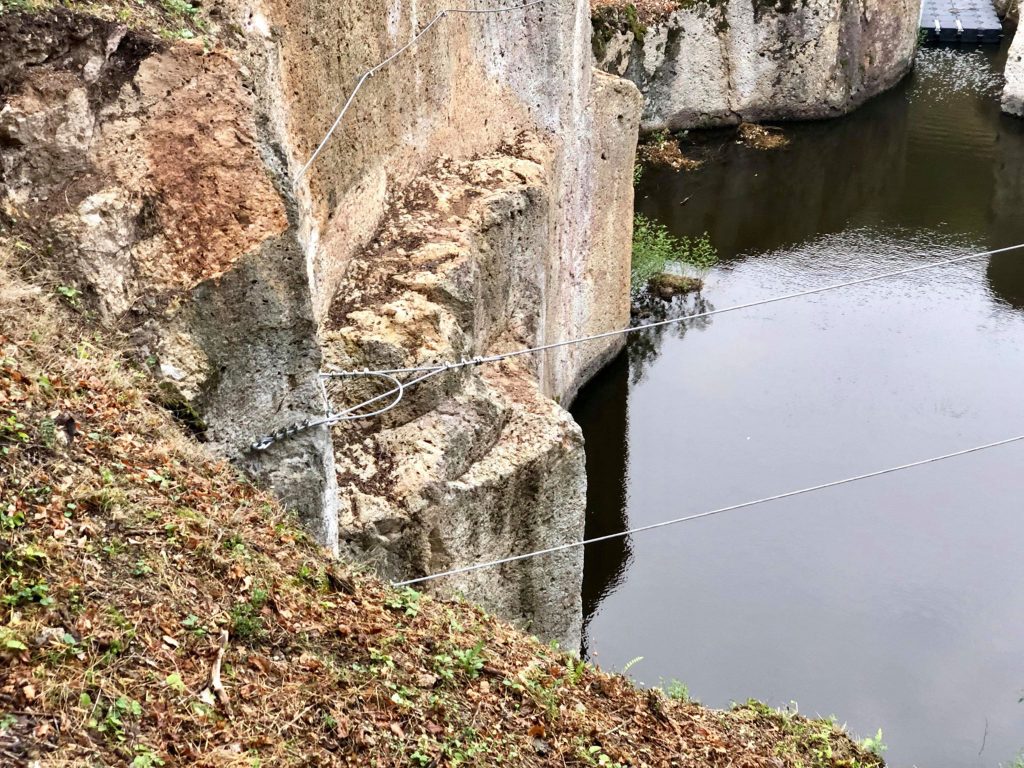 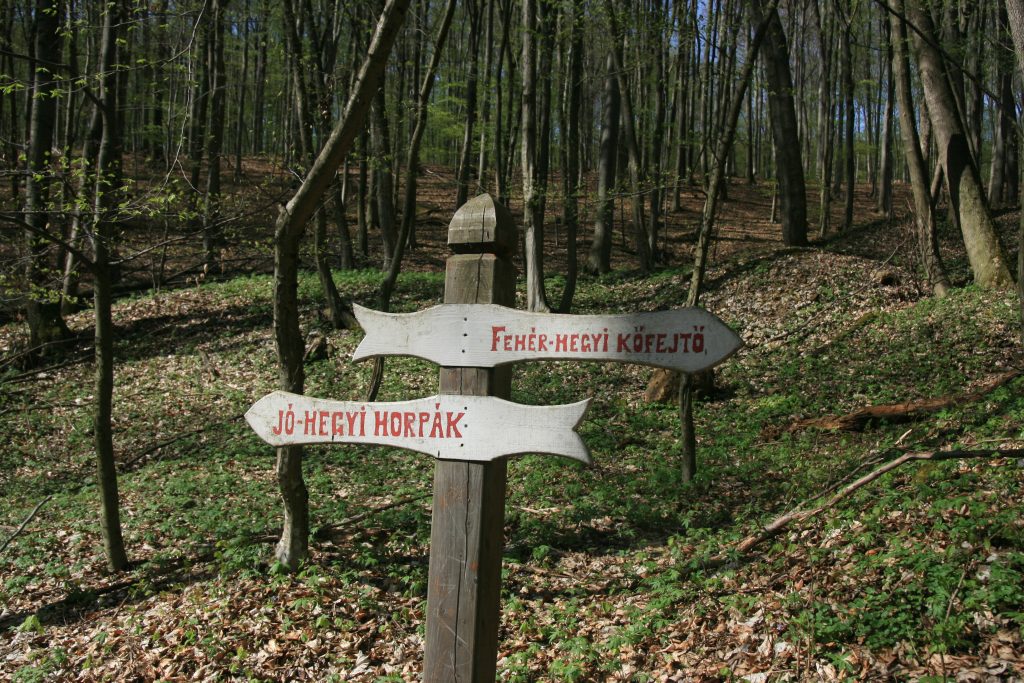 The manufacturing of natural stones is one good representation of the impact of geology on society and illustrates clearly how culture may influence geoheritage perception and use through the centuries. All quarry sites represent significant scientific, educational, cultural and/or aesthetic values. These criteria determine the perception and exact value of geoheritage and define geosites. Megyer Hill has the widest reputation and is a nationally well-known geosite. The picturesque lake in the abandoned quarry was selected as Hungary’s most beautiful natural attraction in 2011. The other sites have regional tourism relevance with moderate tourism flow. Further improvement in site management includes geoconservation and geotourism activities. After the geoconservation survey of Füzérradvány and Telkibánya sites, a declaration of protection would ensure the preservation of the geoheritage. It would be important for organised control over mineral collecting activities. The quarry walls need continuous vegetation removal for better visibility. The new tourism development (Sárospatak) and further involvement of universities can provide seasonal geo-guided walks of public interest. These activities can contribute to maintaining a better image of the sites and more efficient use of their geotouristic and geoeducational potential in a sustainable way.