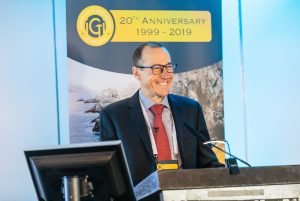 At the occasion of the 20th Anniversary Conference of the Institute of Geologists of Ireland (IGI), EFG President Marko Komac recently delivered a keynote speech on “Geology and the Energy Transition”, a topic addressed earlier this year in a position paper issued by the Federation, where geothermal energy (both shallow and deep geothermal), CO2 capture, and mineral extraction are identified as part of the answer to the challenges set out by the climate crisis.

The anniversary event offered the opportunity to review the origins and evolution of the IGI including the future IGI’s strategy. Other key topics were climate emergency and the role of geoscientists in this emergency, and community relations and how geoscientists have a key part to play in sustainable development going forward.

IGI President Mairead Glennon stressed the importance of the event for the IGI:

“On 11th October in the Sheraton Hotel Athlone, the Board of the IGI were delighted to be joined by over 100 delegates and 14 sponsors over the course of a day where we celebrated the founding and the last 20 years of the IGI, looked into the future with the launch of the new strategy and heard from a range of speakers on the topics of the climate emergency and community engagement. We had around 50 people take part in ‘speed networking’ which saw delegates from all career stages and disciplines get to know one another in an out-of-the-ordinary networking event. The day was finished off by the celebration Gala dinner and music from ‘Boxty’.”

The presentations delivered during the conference will shortly be available on the IGI website.