Press release I Brussels I 28 September 2018

On 26 September 2018, the European Geosciences Union (EGU) and the European Federation of Geologists (EFG)  have jointly convened the Horizon Geoscience: overcoming societal challenges, creating change dinner debate. Held at the Royal Academy of Belgium, the event has gathered nearly 80 policymakers from European institutions, media representatives, and geoscience professionals from different sectors and fields of expertise.

“Geoscientists don’t sing the message [of how important their science is to society] too loud,” said Iain Stewart, Professor of Geoscience Communication at the University of Plymouth and science broadcaster at BBC, in his opening speech. He also highlighted the need for society to better understand what it wants from geoscientists because “if we are looking for a sustainable future, it seems to me you are going to need geoscience.” 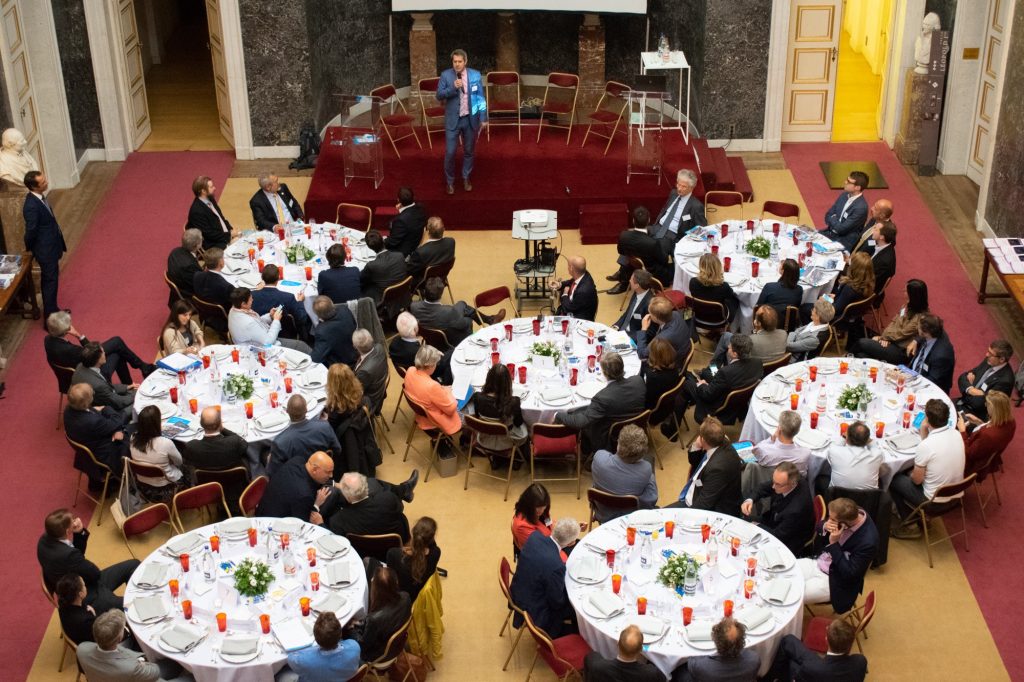 The dinner debate allowed researchers, policymakers and industry leaders to assess together how greater collaboration between these groups can help Europe overcome some of its biggest societal challenges. Encompassing a large number of scientific disciplines, the geosciences play a vital role in many policy decisions, including for instance climate change, natural hazards, energy, mineral raw materials supply, space exploration, agriculture and ocean health.

Lieve Wierinck, Belgian Member of the European Parliament, agreed that geoscientists are a critical element in finding solutions to overcome the challenges our planet is confronted with today: “You are a small group, but I think you are a very important one.” She also highlighted the need for geoscientists to broaden their scope and collaboration with others to solve these issues, stressing that the problems we are facing are so substantial and it’s not only up to one part of the community to solve them.

On the geosciences side, John Ludden, British Geological Survey Chief Executive, expressed his concern that geoscientists are funded mostly to get their research into major journals such as Nature or Science, and are less rewarded for thinking about how their research could improve society.

Jean-Eric Paquet, Director-General at the European Commission’s DG for Research & Innovation concurred with the other panelists that geoscience is central for public policy making and stressed the need for international collaboration, especially in the field of climate change and oceans.

The increase of international collaboration, as well as of multidisciplinary and cross-sectoral cooperation have been highlighted by the geoscience community as the most positive outcomes of the European Union’s Horizon 2020 Programme that is allocating almost 80 billion euros to research and innovation over 7 years. In spring 2018, EGU and EFG jointly conducted a survey among geoscientists from across Europe, but also from abroad, to evaluate the perceived success of Horizon 2020. The Horizon Geoscience dinner debate offered the opportunity to launch a report outlining the survey’s key findings and suggesting improvements for the forthcoming Horizon Europe framework programme. Although the participants were overall positive about the impact of Horizon 2020, the report also emphasised areas that survey respondents thought could be improved, such as the number of projects that focused on fundamental rather than applied research. Furthermore, the survey gave participants the opportunity to list areas they felt were underrepresented in Horizon 2020 projects. The areas most frequently listed were natural hazard management, hydrology and water resources, and raw materials and resources.

Jean-Eric Paquet then provided insights into the preparation of Horizon Europe, the ambitious €100 billion research and innovation programme that will succeed Horizon 2020 in January 2021 and is currently under negotiation between the European Parliament and the Council. He emphasised especially the future support to mission-oriented funding which will address the often-highlighted lack of continuity once projects officially end. Mr. Paquet also presented two key features of the forthcoming Horizon Europe programme: the European Innovation Council, which will enhance the commercialisation of innovative technologies developed by EU-funded projects, along with a multiannual strategic planning approach which will rely on initial consultations among the European institutions and a strong engagement with citizens and civil society organisations at all stages. He finally underlined the importance of the budget foreseen for Horizon Europe and expressed his pleasure about the European Parliament’s supportive attitude which has voted, by coincidence on 26 September 2018 as well, for an increase of the 2019 budget for research and innovation. 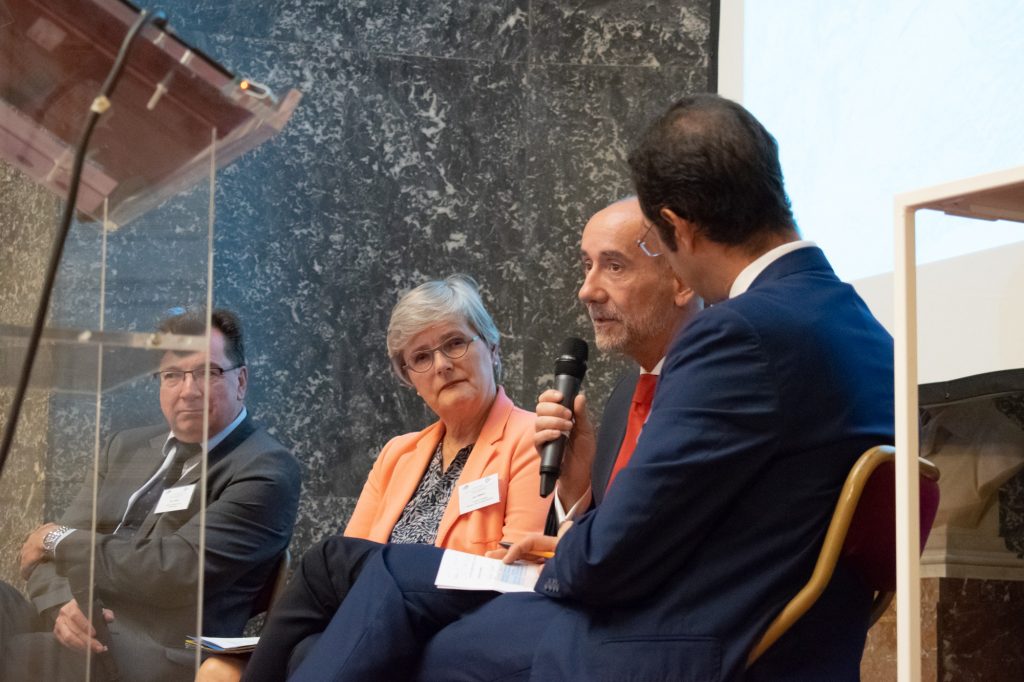 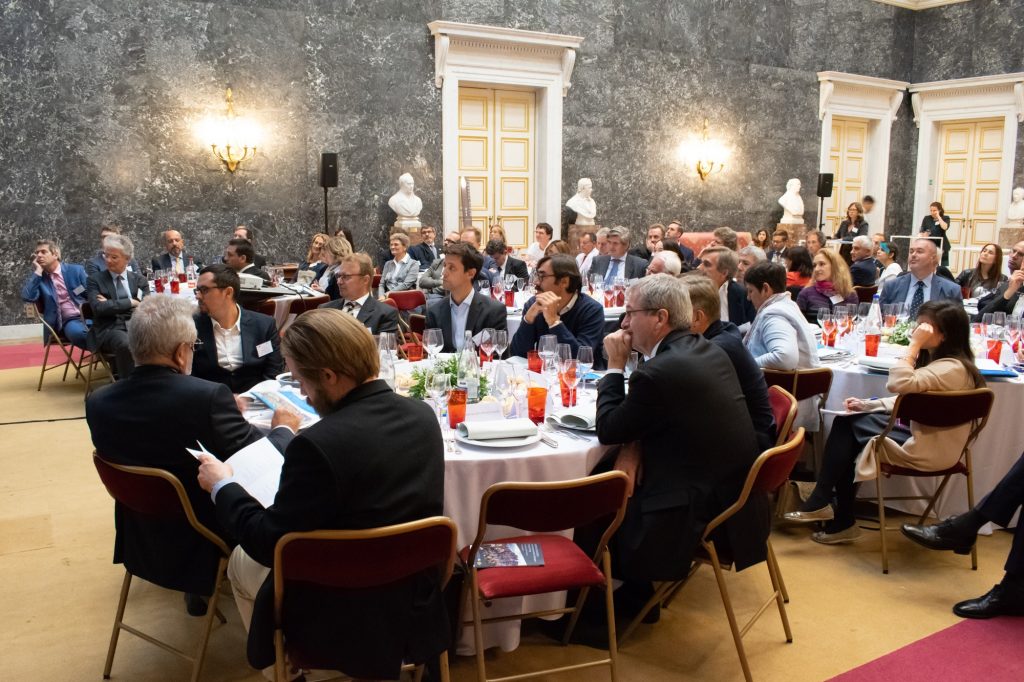 The second half of the evening involved round-table discussions over dinner, offering the opportunity for scientists, industry representatives and policymakers to come up with ways to reduce the barriers between the geosciences and policymaking. One of the solutions presented was having more scientist-policymakers pairing schemes, which allow the two groups to improve dialogue and better understand each other’s needs.

Kurt Vandenberghe (Director for Climate action and resource efficiency, DG for Research and Innovation, European Commission) prominently concluded the panel’s debate, which was moderated throughout the dinner by EFG and EGU Presidents Vitor Correia and Jonathan Bamber, stressing the importance of targeting at science excellence and increasing impact of research projects.

In her closing speech, EFG Executive Director Isabel Fernández emphasised the event’s relevance for the geoscience community, having succeeded in gathering more than 20 policy representatives from the European institutions. She also highlighted that the dinner debate was the first time that academia and industry representatives have joined forces to open a dialogue with policymakers on how geoscientists can support public policymaking more efficiently. 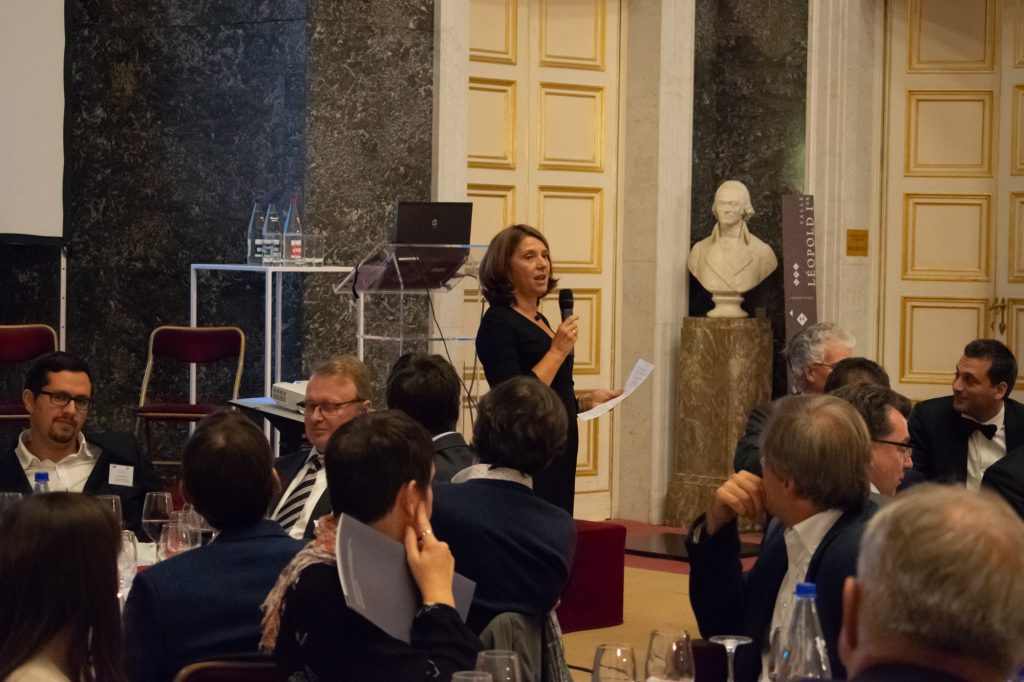 The European Federation of Geologists (EFG) is a non-governmental, professional organisation that represents, through its national associations, over 45,000 individual members. EFG aims to contribute to a safer and more sustainable use of the natural environment, to protect and inform the public, and to promote a more responsible exploitation of natural resources.

The European Geosciences Union (EGU) is Europe’s premier geosciences union. It is an international union of scientists with about 15,000 members who span many key scientific areas that can enhance the policymaking process. These topics include, but are not limited to, natural hazard protection, energy resources, climate change policy, soil science, and raw material sourcing.