One Day in Europe: Germany

One Day in Europe is a feature of EFG’s monthly newsletter GeoNews. Each month we travel to one of EFG’s national membership associations and discover their main activities and challenges. In September we visited Germany. 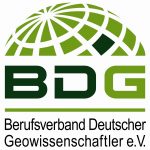 The Professional Association of German Geoscientists (Berufsverband Deutscher Geowissenchaftler e.V., BDG) represents the professionals from different fields of Earth sciences (geologists, geophysicists, mineralogists and other geoscientists) since more than 25 years.

EurGeol Michael Neumann, EFG’s new Vicepresident, answered our questions. Michael Neumann was born in Hamburg in 1953. He studied geology at the universities of Freiburg, Hamburg (Diploma) and Heidelberg (PhD). He is married since 1991 and has two children. He started his professional career with the Geological Survey of Hamburg. Since 1984 he carried different positions in over 15 countries in the Metallgesellschaft-GEA-Sachtleben group of companies as exploration, mining and environmental geologist. At present he is the operational manager and chief geologist of Sachtleben Bergbau Verwaltungs-GmbH in Lennestadt/Germany. He is a member of BDG since 2003, European Geologist since 2005, Press Officer of BDG since 2015 and EFG Vicepresident since 2016.

How many members does the BDG represent? How did your membership evolve over the past few years and in which field of geology do your members mainly work? – The Berufsverband der Deutschen Geowissenschaftler (BDG, German Association of Geoscientists) is the only professional association of geoscientists in Germany and has approximately 2.100 members. The number increased slightly but constantly over the last years.

Our members come from all fields of geology and geoscience. The biggest group at present work in small and medium sized consulting companies in the fields of hydro-, environmental and engineering geology.

How is your association structured? – The BDG is located with its headquarter in Bonn but has an active branch office in Berlin.  It is structured into the board, the general meeting of its members, the advisory committee and the full-time management in Bonn and Berlin. Separate from the association is the charitable Bildungsakademie, a foundation which organises the professional training courses for its members.

What is your focus for 2016? – Our main internal focus for 2016 is optimising internal processes such as updating our statute and implementation of a new office in Berlin. The BDG is currently planning a national image campaign to improve the status of geology in public and to show the importance of the geoscientists for the society. In succession of our book, which we have published in 2012, we are about to reissue our GeoBerufsbilder – a collection of job descriptions by geologists. Additional activities will result from our participation in Kindra and Intraw projects.

What are currently the main challenges for your association? – The image campaign and the organisation of the training courses.

Do you promote geology towards society? If yes, how? – We organise yearly events such as “Stein im Brett” (“stone in the board”), a price to non-geoscientists who contributed substantially to geoscience and its professions. In 2016 the price was handed over to Prof. Klaus Feßmann, a musician working with instruments made from stone. The second yearly event is the “Rock of the Year”, highlighting a special rock and its importance for economy and society. The 2016 rock of the year was sand. This event was started in 2010 and is meanwhile shared by several other organisations.

Do you have any particular activities to attract young geoscientists? – We have an intense program to support young geoscientists. We successfully offer a mentoring program bringing together young professionals with experienced geoscientists in industry and consulting. Besides this there frequently events and speeches at the university, special training courses for beginners and a working group within the advisory committee. A weekly jobticker, distributed by email, completes our offer for young geoscientists.

Are you in contact with decision makers at national level? If yes, in which field? – Yes, especially with the state surveys for geology, mining and environment. Besides that there are regular contacts in conference, fairs and other events.

How would you define your association’s relation with EFG? – Close and trustful. The BDG fully supports the EFG as the only and important representation of geoscientists in Europe and abroad.

What would you like the other EFG membership associations to know about BDG? – We are open to the other European associations and would support for example shared training courses, international mentoring and exchanges.

Is there any experience/good practice from BDG that you would like to share with other associations? – Distributed over Germany there are a lot of local BDG groups which meet regularly and share information and experience. Besides that we think our mentoring program could be interesting for those countries which do not have anything like that.

What would you like to know about the other EFG membership associations? – We would be interested to learn about the professional and scientific structure of our neighbouring associations, share their training with ours and support regular contacts.

In your opinion, how could EFG improve the knowledge about the activities carried out by other associations? – Probably an online page showing the different activities for the individual countries would be a good idea and share contacts. Another useful idea would an international mentoring program and an exchange of students for scientific activities and internships.

More information about the BDG: http://www.geoberuf.de/