From September 18th to 20th REMTECH 2019, a trade fair for soil and groundwater remediation, took place in Ferrara / Northern Italy. During the fair, the Consiglio Nationale Geologi (CNG), the professional representation of geologists in Italy, organised a roundtable discussion on the general state of geology in Italy.

At six tables various topics in the field of geology, from university education, geo-risks, to international certification were discussed. Invited were among others Michael Neumann, Vice-President of the EFG, and Gabriele Ponzoni, Secretary General of EFG, to talk about professionalism and certification among geologists worldwide. It quickly became clear that the topics in Italy are very similar to those elsewhere in Europe. This ranges from decreasing quality of education at the universities since the Bologna reform, over often unwillingness to commit oneself abroad and the international certification, up to a loss of trust of the public, up to the ranks of the politics in the facts of the science and the geology. Some examples include fracking, earthquake prediction, mining and nuclear waste disposal. 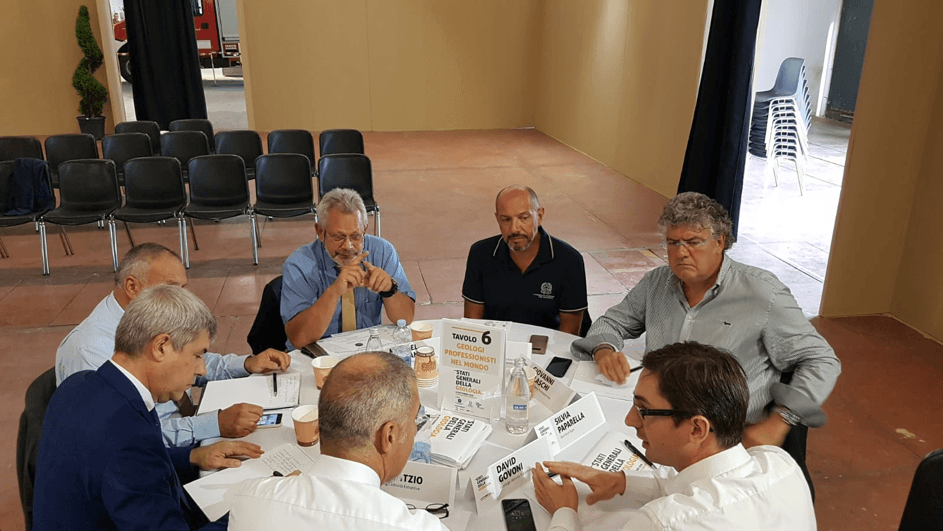 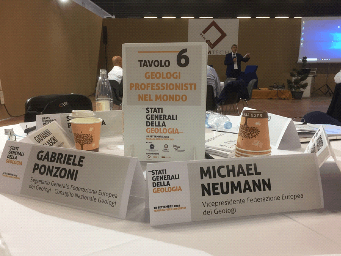 It is also clear in Italy that local sources of raw materials (sand, gravel, lime, but also ores) are necessary but increasingly difficult to enforce. But anything else would mean that jobs and tax revenues get lost. At the same time, environmental issues and occupational safety would be exported to foreign countries without having any means of control.

The CNG is organized as a geological chamber with nearly 14,000 members from all fields of geoscience. Any geologist who wants to work in Italy must become a member. The liability insurance and the pension plan are handled by the CNG. The CNG was a founding member of the EFG in 1980. In addition, there is a union of Italian geologists (SINGEOP).