EurGeol of the month: Barry Hunt

“European Geologist of the month” is a section of EFG’s monthly newsletter GeoNews. Each month we ask one of the European Geologist title holders to tell us about his professional experiences and which role the title has played for his career. This month we have talked to Barry Hunt, member of the Geological Society of London (GSL).

Barry’s early career between 1988 and 2002 involved working for two civil engineering consultancies as a geomaterials scientist. In 2002 Barry started his own company, IBIS, specialising in the expert investigation of construction materials. The specialist knowledge and services provided by Barry have allowed him to be instrumental in the resolution of problems ranging from blastdamaged stone claddings in the City of London to advice on the quarrying and extraction of stone from abroad for import to the UK. Other areas of experience include the investigation of all types of building finishes, specialist advice on remedial treatments and the preparation of advice for actual and potential use in litigation, mediation and arbitration.

Barry is a member of the Stone Federation of Great Britain’s (SFGB) Technical Committee, which provides advice on all stone construction issues. He is also part of the SFGB team that has published codes of practice for the installation of stone floors, internal finishes and, shortly, swimming pools. Barry can now include amongst his Clients many famous people and notable properties, in particular the Bank of England for whom he provides ongoing advice for the condition and repair of the external façades. 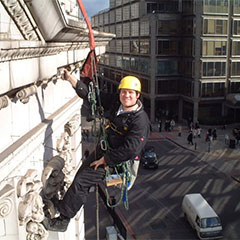 EurGeol title number: 272
Country: England
In which country do you currently work? – Mostly within the UK but also abroad, having taken jobs in the US, Iran, Ireland, Qatar, Tunisia, Singapore, Australia and several other countries. I also conduct work for many non-UK based companies.
In which field of geology do you work? – Geomaterials and most commonly stone used in construction.

How would you explain to the average person what geology is and why it is important? – Geology is the science of everything on Planet Earth, from all we use to build, our fuels and plastics, our soils for growing and climate to moan about, it’s not just about rocks. Our oldest art and language was set in stone, and our first static dwellings were caves. Nothing is more important nor more taken for granted and misunderstood than geology.

What inspired you to become a geologist? – The Apollo missions, because the point of going to the moon was to collect rocks. I almost joined the RAF after my degree because all astronauts had been fliers. I had the honour of meeting Harrison Schmitt in 2015, the only geologist to go to the moon, and this at the Bardarbunga eruption site. They were celebrating the 50th anniversary of practicing the moon landings on the Icelandic basalts.

Have you been a geologist all your life? If not, what other job(s) have you done? – Yes, working in the field of geomaterials.

In which sector(s) did/do you work? – Building construction, and specifically the use of natural stone.

What do you currently do in your job? Could you describe an average day? – I am a control freak and so will abseil down a building to view the stone masonry myself, undertake coring or other sampling, conduct my own petrography, and write reports suitable for expert witness purposes. There really is no such thing as an average day, each day has its own unique fascination.

What’s your favourite part of your job? – Finding a solution to a problem, and the satisfaction this provides.

What is your proudest accomplishment as a geologist? – Difficult one this, but I would say that providing the design for the Exhibition Road scheme, which runs past the Geological Museum in London, and is a hugely successful shared space scheme. The road was built using stone and designed to last a thousand years.

Could you explain when and why you applied for the European Geologist title? – I applied in 2002 and saw this as a logical step after obtaining Chartership and the increasing work I was undertaking within Europe.

Did you already work abroad? If yes, could you tell us about your experiences abroad? – I have always been UK-based whilst undertaking short commissions across Europe and the rest of the World. Early work took me to Pakistan, the Caribbean, Bulgaria, Romania, and many of our nearer European partners.

What are your professional projects/aspirations in the future? – I have just purchased a business in Ireland and hope to switch between there and London. For different projects. The ultimate goal is to open a geological sculpture park and distillery, an interesting combination!

There are fewer women working in geology than men. What would you say to girls who might be interested in a career in geology? – Geology is multi-tasking and the gateway to so many interesting careers, and offers a potential freedom and work experience few other careers can.

Why should young people consider a career in geosciences? – The World cannot get away from the fact that it requires immense resources and there will always be exploitation and use, but then also the cause and effect of immeasurable problems. Geoscientists will always be wanted to provide answers and to take the lead in guiding the World.

What kind of personal qualities do you need as a geoscientist? – A love of Planet Earth, what else! Otherwise, an open mind, a tenacious spirit, and a will to believe in and do the right thing.

What does the European Federation of Geologists represent for you and what do you expect from our association? – More than ever now the EFG has to link with UK geologists, as our science thrives on sharing expertise and information.

Why does it matter to have a European, cross-border community of geologists? – The geology of the earth has no political boundaries, and geologists should be no different. The internet is strangling good information when it was supposed to do the opposite, and more than ever we need to come together and get our house in order, to promote our science as the science.

To know you a little better: What do you like to do in your spare time? – I took up archery late in life after my son wanted to try it out. Six years on and last year I became national clout champion using a barebow, and have also set two national records to boot. My other love is stone sculpture, which I plan to do more of as I head towards supposed retirement.

Eurgeol title
We use cookies on our website to give you the most relevant experience by remembering your preferences and repeat visits. By clicking “Accept All”, you consent to the use of ALL the cookies. However, you may visit "Cookie Settings" to provide a controlled consent.
Cookie SettingsAccept All
Manage consent