“European Geologist of the month” is a section of EFG’s monthly newsletter GeoNews. Each month we ask one of the European Geologist title holders to tell us about his professional experiences and which role the title has played for his career. This month we talked to Pierre De Geest, member of the Belgian Luxembourg Union of Geologists (BLUG/UBLG). He is currently working as a senior geologist for the Dredging Environmental Marine Engineering-group (DEME), executive committee member of the Friends of Soqotra and obtained the EurGeol title in 2015.

In which country do you currently work? – In Belgium at the Head Office of the DEME-group, but frequently working worldwide project related. 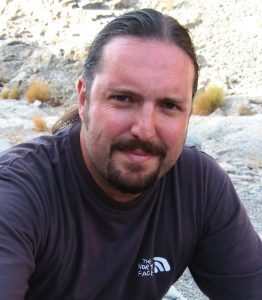 What inspired you to become a geologist? – The adventure of discovering our planet at its surface and below fascinated me. The book “A Journey to the Centre of the Earth” from Jules Verne, sparked my interest. Age 12 I started collecting minerals, later fossils and became an active cave explorer age 15. Especially the dimension of time in relation to a changing “living-earth” is mind blowing.

How many fellow students did you have? – We graduated at the University of Ghent (1998) with a rather exceptional big group of 25 students. Around 10 of them started a Ph.D., even resulting in a couple new University professors.

There are fewer women working in geology than men. What would you say to girls who might be interested in a career in geology? – If you are really interested in geology, “Just go for it!” During my time at University we were equally divided and possibilities enough on the job market. These days only field work in “misogynistic environments” still causes practical problems.

Which field of geology did you study in particular? – I studied micropaleontology during my Master at the University of Ghent to reconstruct paleo environments. Later onwards (2003-2006) I combined my cave explorations with a Ph.D. study at the University of Brussels to reconstruct the Holocene paleoclimate with the use of stable isotopes and geochemical research on speleothems from Soqotra Island (Yemen).

In which sector(s) did/do you work? – After my Master thesis I started working as an environmental geologist in a private company. Here I learned working with different drilling equipment and applying geotechnical site investigation techniques. After returning to the academic world (did not defend my Ph.D.) I ventured into engineering geology at the big land reclamation projects in the United Arabian Emirates (UAE).

What do you currently do in your job? Could you describe an average day? – As for most geologists, the concept “average day” is rather abstract to me. The DEME-group is a global solution provider, so we try to keep up with a variety of geological challenges: ranging from modelling deposits that have to be removed (dredged, drilled or blasted) over searching suitable materials for reclamation projects (soil and rock) towards looking out for new mining commodities in the deep sea, etc. The regular desk study based on tender info; follow up/organisation of a safe site investigation (geophysics combined with geotechnics), modelling and reporting all the available info is the main task. Some innovation and research is required to keep ahead of the competitors.

What’s your favourite part of your job? – The job diversity, variety and travelling around the world to delve into specific needs at specific locations under particular circumstances related to geology.

Why should young people consider a career in geosciences? – Thinking globally is something rather new and here geosciences play an important role for future challenges, such as:

What kind of personal qualities do you need as a geoscientist? – As geosciences do overlap with many other sciences, especially during interdisciplinary projects, being an open minded team player with strong social leadership skills can be a real benefit. Also flexibility, versatility, accuracy, durability and finding out-of-the-box solutions are highly demanded qualities.

Did you already work abroad? If yes, could you tell us about your experiences abroad? – I worked approximately 2 years in the Middle East (UAE and Oman) and around 7 months in Australia as an expat with my family. Regularly I spent some weeks abroad on soil investigations worldwide (all continents except for Antarctica). All these experiences taught me respect, mutual understanding and to put things in perspective.

What does the European Federation of Geologists represent for you and what do you expect from our association? – For me the association represents a “geo-quality-mark”, providing trustworthiness in research, data analysis and reporting. I expect the EurGeol title to gain recognition worldwide, promoting, supporting and raising awareness for geosciences to the public.

Would you advise fellow geologists to become a member of a professional association? – Yes I do, as networking is an important factor, making you more aware of the professional needs around you. New innovative technologies are reaching us at a faster pace than ever before, so trying to keep up is easier in a community then alone.

To know you a little better: What do you like to do in your spare time? – I like to spend my free time outdoors with my family, exploring nature and culture (walking, photography, learning from foreign customs) and doing some gardening. Although cave exploration is becoming less active, investigating cave proxies (archaeological remains, water supplies, sediments, speleothems) remains a fascinating hobby.