EurGeol of the month: Irma Dobos

“European Geologist of the month” is a section of EFG’s monthly newsletter GeoNews. Each month we ask one of the European Geologist title holders to tell us about his professional experiences and which role the title has played for his career. This month we interview Irma Dobos, member of the Hungarian Geological Society (MFT) and long-standing EurGeol title holder.

Irma Dobos was born on the 11th of May, 1926 in the town of Szentes in the Southern Great Plain of Hungary. She obtained her PhD degree in geology as a main subject and in minerology and geography as minor subjects from the University of Szeged in 1950. Between 1949 and 1951 she worked for the Geological Institute of the university as a demonstrator, then for the Hungarian State Geological Survey as a surveyor geologist until 1954. When the national industrial geological service was organized in 1954 she was delegated to the Deep Drilling Company of Tokod where she organized and supervised the coal research work – first at shop then at company level – as a chief geologist. In the meantime Irma Dobos marked out the place for the first waste isotope repository in the country near the capital in 1957, which was in function for 17 years.

From 1958 she worked for the Water Exploration and Well Water Drilling Company. Some 2000 of her hydrogeological proposals and expert‘s reports aimed at the supply of the country with cold, thermal, mineral and medicinal waters. An improved version of her expert’s report on the precipitation of lime in thermal water wells is still applied successfully in the country. The deep well near Szeged – the setup of which was based on her expert’s opinion on gaining thermal water in Tápé – gave the first oil well  of the oil field at Algyő, named Tápé no. 1.

From 1966 until 1968 Irma Dobos worked in Cuba as a geologist expert. Her job covered the review of geological exploration plans and the preparation of mineral raw materials balance. Besides she elaborated the up-to-date process and registration system of geological data for the Archivo Nacional.

In 1968 Irma Dobos returned to her former workplace and worked there as a departmental head-chief geologist until 1982. In the frame of international commissions to the Drilling Company she gave expert’s opinion on several thermal water wells designed and brought into effect in the former Yugoslavia and Czechoslovakia. Design and exploration of several thermal water wells were carried out successfully inland as well.

Between 1968 and 1996 she organized two exhibitions in the topics of history of science and took part in the organization of further two, as well.

Since 1975 Irma Dobos has mainly been engaged in mineral and medicinal water research and in the history of science of the topic. At present she has some 500 publications both in Hungarian and in foreign languages. She was regular lecturer at the Semmelweis University, at the Department of Applied and Environmental Geology of the Eötvös Loránd University, and at two other colleges. She is a member of several Hungarian and two international professional societies and federations, in some of them she is on the board, too. Her professional oeuvre was appreciated with 18 honours by her former workplace and by several science societies and universities. The European Federation of Geologists awarded her the EurGeol title in December, 1999. She received gold-, diamond-, and iron diplomas from the University of Szeged in 2000, 2010 and 2015 respectively.

In which country do you currently work? – Hungary

In which field of geology do you work? – Education, Geological heritage, Hydrogeology, History of science of geology 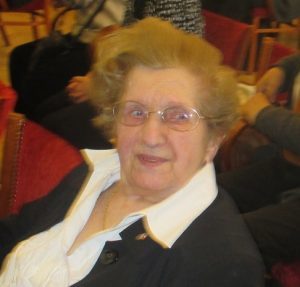 How many fellow students did you have? How many of them were women? – I was the only woman among the ten of us.

There are fewer women working in geology than men. What would you say to girls who might be interested in a career in geology? – Women can achieve the same results as men if they work hard and have a well-chosen research theme.

Which field of geology did you study in particular? – Hydrogeology.

In which sector(s) did/do you work? –  I have worked in stratigraphy, palaeontology and hydrogeology. The latter I practice at present as well.

What’s your favourite part of your job? – In my research in history of science I find newer and newer data and with them I can throw new light upon the topic observed or I can introduce a famous person from a new viewpoint.

Why should young people consider a career in geosciences? – They should choose geology as a career because its research is connected with virtually every field of natural science.

In which way did the profession of geology evolve since you started your career?  There are many new areas: modelling is a new method for representing geological processes, other achievements are storing CO2 under surface, applying isotope tests in dating groundwater bodies, hydrocarbon exploration at sea, and so on.

Do you think that the view of society on geology changed since then? – Public at large does not generally know phenomena of nature well, and wants things to be unchanged.

Could you explain when and why you applied for the European Geologist title? – Since the Federation offers not only a kind of protection for its members but gives the opportunity to work abroad and to provide technical expertise for different institutions.

Did you already work abroad? If yes, could you tell us about your experiences abroad? – My longest work abroad lasted two years in Cuba where I reviewed several research reports and drafts on mineral raw material, and prepared the annual mineral reserves balance.  I also helped in their very important nickel research by translating a large publication in German into Spanish, which resolved the problem of separating cobalt from nickel. Based upon my plans a new system of the National Data Storage covering the whole country was prepared which was already suitable for processing by computers.  – I also designed several successful thermal water explorations in the territories of the former Yugoslavia and Czechoslovakia.

What does the European Federation of Geologists represent for you and what do you expect from our association? – The Federation constantly protects the professional interests of its member-geologists and offers opportunity to publish useful and valuable ideas for everyone.

To know you a little better: what do you like to do in your spare time? – I consider it important to be apprised of the cultural news by reading belles lettres, listening to classical music and visiting fine arts exhibitions.