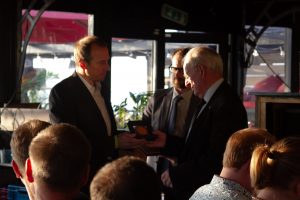 In recognition of his major contribution to the development and wide recognition of the status of professional geologists both nationally and internationally, the Geological Society of London (the Society or GSL) has proposed, in 2018, Dr JW (Bill) Gaskarth for award of the EFG Medal of Merit in 2018. The official award ceremony took place during the recent EFG Council meeting in Delft, the Netherlands.

Bill, as he is universally known, was appointed as GSL’s first Chartership Officer in 2009 and was pivotal to the development and strengthening of the Chartership process within the Geological Society. In the light of his long-term commitment, exemplified by his exceptional and distinguished contribution to the geological profession, EFG considers that Dr Gaskarth is a very worthy recipient of the EFG Medal of Merit.